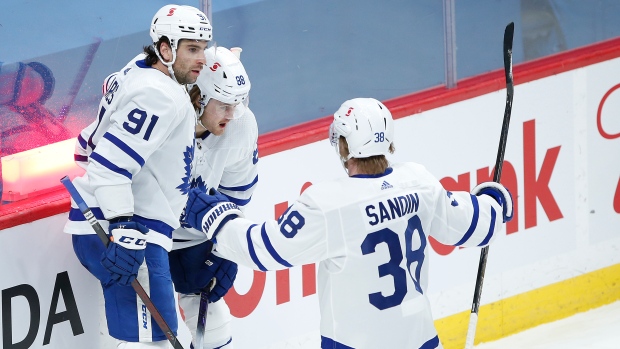 TSN Toronto Reporter Mark Masters reports on the Maple Leafs, who practised at Ford Performance Centre on Tuesday before flying to Montreal for Wednesday’s game against the Canadiens.

Rasmus Sandin is getting an opportunity to prove he deserves a spot in the Leafs playoff lineup.

"We got to give him more runway here," said head coach Sheldon Keefe. "We expect he'll play most, if not all, the [eight] games remaining in the regular season."

The 21-year-old defenceman didn't play for the Leafs in the playoff bubble last summer and then only saw action in one NHL game – logging just five minutes – before being sent to the American Hockey League this season. He sustained a foot fracture in his first game with the Marlies on Feb. 15 and didn't return to game action until last week.

"He's smooth," said Auston Matthews with a smile. "He just makes such good plays out there. He skates well. His edges and the way he sees the ice and is able to kind of draw guys in and make plays ... he's fun to watch. For a guy that hasn't played hockey a lot over the last year, it definitely doesn't look like it out there."

Sandin's talent is undeniable. It's why he was drafted in the first round (29th overall) in 2018 and then suited up in 28 games with the Leafs last season. But the big question is whether the 5-foot-11, 183-pounder can hold his own at the toughest time of the year.

"We haven't seen much of the things that we thought were a problem last season, especially in the defensive zone and in and around our net and along the walls," Keefe observed. "That's something we'd like to make sure we assess properly over a greater sample. The three games that he's played since he's come back from his injury he's done a good job."

It was a big hit by Detroit's Justin Abdelkader ​in October 2019 that ended Sandin's first stint with the Leafs. Then coach Mike Babcock said the team needed to protect the teenager.

Sandin favouring his jaw after Abdelkader catches him high pic.twitter.com/p0CIO8VM8W

Sandin says he's feeling much stronger now and the Swede made a statement on Saturday by levelling Jets captain Blake Wheeler with a reverse hit.

"I don't think guys are ready for that to happen," said William Nylander, who trained with Sandin in the off-season. "He caught him a little bit off guard."

"It helps you feel comfortable and confident on the ice," said defenceman Jake Muzzin. "It gets your energy and intensity going when you do a hit like that so hopefully it continues. It was a nice hit."

Zach Bogosian is sidelined until at least May 18 with a shoulder injury and Travis Dermott has shifted over to take that spot on the right side of Toronto's defence, which is allowing Sandin to enjoy an extended audition on the left side of the third pair.

Sandin is also getting a look as the quarterback on the second power-play unit, but Keefe stressed he is already comfortable with him in that role. That's not the focus even with Toronto struggling to score on the man advantage.

"He needs to really show that he can play at even strength here and play against tougher matchups," Keefe said. "The playoffs are just too difficult, too challenging, the teams we're going to play are too deep for us to have to protect him. We want to make sure that he's got that foundation."

Alex Galchenyuk has been a minus player in five straight games, registering only one goal and nine shots in that stretch. However, his spot as a top-six winger doesn't appear to be in jeopardy.

Since breaking into the Leafs lineup on March 19, Galchenyuk has lined up mostly beside John Tavares and Nylander, which is where he's currently slotted.

"I like what Alex has brought to that group there," Keefe said. "Whether it's there or whether we play him with Auston, he's done a good job for us. I think it can continue, which certainly presents a great option for us. It helps us with our depth on the other lines."

Keefe had a chat with Galchenyuk on the ice at the end of Tuesday's practice.

"I've been talking to Alex about making sure he has the continued level of consistency in his game," the coach said. "All of the things that have made us really believe in him, they have to stay strong and he's got to stay with that here as the schedule piles on and as he's played more minutes and as he's continually playing against harder competition."

Galchenyuk has one goal and two assists in the last 10 games.

Tavares, meanwhile, is surging down the stretch. The centre has seven goals and nine assists in the last 11 games.

"He's been buzzing," Nylander said. "He's been on fire. He changed his curve and got his sticks going and he's been dialled with it."

"He was playing with a different stick that wasn't really his stick so he had to wait some time to get the new sticks and, I mean, he's been doing great with it," Nylander said. "So, it’s fun to see."

Tavares has scored on 13.2 per cent of his shots in his career.

There was some concern at Monday's practice when Matthews and Nick Foligno collided during a drill.

"For me or Auston?" Foligno asked with a laugh. "Probably for Auston more than me."

The newly-acquired 33-year-old was all smiles after the hit and then again on Tuesday when questioned about it.

Foligno got to know Matthews when the pair played for Team USA at the 2016 World Championship.

"I met him as an 18-year-old and now to see him as a guy who's established himself in this league a few years later, it's incredible how his skill has come, but also how he developed as a man," Foligno said. "You can just see the way he can take over games with just his size and strength and ability with the puck. I mean, that's a dangerous combination when you have a guy as big as him that can skate as well as him and hold onto the puck. It's fun for me to see first hand."

Foligno has played on the top line with Matthews and Mitch Marner in his first two games as a Leaf and calls the chemistry "a work in progress." While Foligno is still getting his timing down, he has learned a lot about how Matthews and Marner operate.

Keefe likes how the chemistry has developed so far with that line, especially defensively.

"They've been really connected that way," Keefe said. "That's something I expected Nick to bring to that line. Offensively, it's going to take a bit of time. Auston and Mitch, of course, are going to be the drivers in that regard and when those guys are playing well, Nick will find his place within that."

The coach revealed he plans on playing Foligno with different lines before the playoffs to create a comfort level with various combinations.

Foligno has gone from one of the lowest-scoring teams in the league in Columbus (2.38 goals per game, 29th overall) to one of the most potent groups in Toronto (3.29, seventh overall).

"The way they play here is fast and a lot of transition," Foligno noted. "They get going quick so it's having that mindset [and] when I'm coming out of the zone or getting into the zone [knowing] where the spots are that I need to be."

Riley Nash, who was also acquired from the Blue Jackets ahead of the trade deadline, will be back on the ice soon.

"From what I'm told, it will be any day now," Keefe said. "I'm not certain of the exact status of it, but I was told to expect him to get on skates this week."

Nash sustained a knee sprain on April 4. The centre is expected to be available for the playoffs.