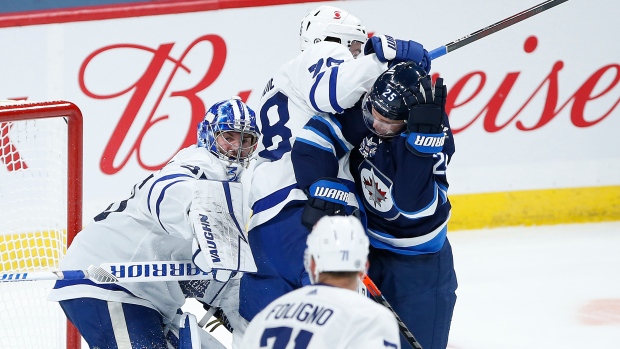 TSN Toronto Reporter Mark Masters reports on the Maple Leafs, who practised at Bell MTS Place in Winnipeg on Friday ahead of Saturday’s rematch against the Jets.

Are the Toronto Maple Leafs a dirty team?

"I don't think so," said Winnipeg Jets coach Paul Maurice. "I don’t feel that. The league has said they're not so we will abide by the league's rulings. But they're a poorer team, right. There's some fines. Probably they'll be looking for some part-time jobs now, because that's gotta hurt."

The last two times the Leafs and Jets have played, a Toronto player walked away lighter in the wallet. Zach Hyman was fined $5,000, the maximum allowable under the collective bargaining agreement, for high sticking defenceman Neal Pionk​ late in a game last week while Joe Thornton was fined $3,017.24, again the maximum allowed, for a hit on Mathieu Perreault, ruled interference, on Thursday night.

"It was kind of a late hit and he got me on the ear," said Perreault, who was pulled by the NHL spotter before returning to the game. "I'm glad we got a power play out of it."

Joe Thornton has been fined $3017.24 for this hit on Mathieu Perreault pic.twitter.com/gsDZFzquML

Toronto’s Joe Thornton has been fined $3,017.24, the maximum allowable under the CBA, for Interference on Winnipeg’s Mathieu Perreault.

It was far from the only flashpoint in the eighth of 10 meetings between the top two teams in the North Division standings.

In the first period, Jets centre Adam Lowry was forced from the game after taking a hit from Alex Galchenyuk, which went unpenalized.

"It looked late and high," Jets captain Blake Wheeler said. "Lows is six inches taller than him so you got to get pretty high to get him."

Galchenyuk's shoulder check connects with the side of Lowry's head pic.twitter.com/zcTvy9V0qw

Wayne Simmonds shook his head when informed of the angst in the opposite dressing room.

"Every time we've played them they've tried to come and run us out of the building to start the games," Simmonds said. "We come back and we're physical and now we're a dirty team? I don't buy that. I just think we’re defending ourselves. We're playing the game physical and it’s playoff hockey."

Simmonds received a penalty for roughing Pierre-Luc Dubois after the Jets centre fell on Leafs goalie Jack Campbell late in the first period.

"I'm sick of guys jumping on our goalie and being allowed to spear our goalie after plays and stuff like that and the refs not calling it so that was my [thought] process there," the winger said.

After a rollercoaster regular season and dispiriting loss to the Columbus Blue Jackets in the playoff bubble last year, the Leafs have led the North Division right from the start this season.

"They're a team that competes extremely hard," said Dubois, who helped the Blue Jackets eliminate the Leafs last summer. "Yes, they have talent, but their compete level is at a high level. You're not just facing a talented team, you're facing a team that can play hard, too."

Blessed with high-end skill, the Leafs made adding toughness and grit a priority in the off-season. They signed Simmonds, Thornton and Zach Bogosian. The addition of Nick Foligno, acquired ahead of the trade deadline, will also boost Toronto's team toughness.

Despite the off-season additions, Toronto has only moved up from 29th to 28th in hits per 60 minutes this season.

"I still feel like we need to be more physical," said coach Sheldon Keefe. "But when I say that you're probably thinking of some of the nonsense that happens after the whistles, that's not what I'm concerned about. I'm talking about being physical on the puck, being physical on defence. Those are the things I'm looking for and we've got areas to grow there still."

Toronto better be ready for some physicality on Saturday in their rematch against the Jets.

Thursday was an emotional night for Foligno, who debuted for the team that his father Mike Foligno played for in the 1990s. In the moments before puck drop, Foligno had a message for his new teammates.

"He had a little speech on how excited he was being a Leaf," revealed 21-year-old defenceman Rasmus Sandin. "That's the kind of player we really want on our team. It's a privilege for all of us to get a guy on our team like that."

"It was definitely a cool moment," said centre Adam Brooks. "I think a lot of guys appreciated him coming in and doing that. He came in and just showed that he's another great fit and a great leader."

"He just said, 'Play with passion. That’s what the Leafs fans love' ... & I think that's something I can bring ... if you play with passion all the other stuff falls into place" https://t.co/IMJ79j1k2p

On the ice, Foligno delivered as advertised. He played a physical and defensively responsible game while slotting in beside Auston Matthews and Mitch Marner.

"You can just tell they know a lot about each other," Foligno observed of the dynamic duo. "You just try and complement that and they don't make it too hard on you. If you can play a straight-ahead game and give them some room and get them the puck and then go to the net and try to be heavy in the areas that you need to be heavy in, you can have a lot of fun."

Foligno picked up his first point as a Leaf by assisting on Marner's empty-net goal.

Mitch Marner gets the empty netter

Marner sees a lot of similarities between Foligno and Hyman, who's currently sidelined with a MCL sprain.

"They're kind of the same player," said Marner. "Guys that work really hard, have very good hands around the net, can make plays and can also take a hit to make a play. On the forecheck, he's always trying to get the body and the puck free for us to come in and kind of get it away and set up plays. And you know he's going to be at the net, same as Zach."

Connor Hellebuyck wasn't happy to be pulled after allowing three goals on six shots on Thursday.

"I felt fine in the net," he told reporters on Friday. "I'm not going to lie and say I was A-plus material, but I thought the game that I had was good enough to win and it was only going to get better if I was given the opportunity to grow in that game."

A week earlier, it was Campbell who was yanked after allowing three goals on six Jets shots in Toronto.

"It's unacceptable," Campbell said of his play that night. "I put the team and David [Rittich] in a really tough spot and I just know I can be a lot better than that."

Hellebuyck is the reigning Vezina Trophy winner while Campbell is trying to establish himself as a NHL starter at age 29. Hellebuyck exudes confidence even when pucks are going in. Campbell, meanwhile, is quick to fall on his sword any time his team loses. It’s something he’s working on.

"Over the last couple of weeks, I've learned being a little bit too hard on myself isn't necessarily always the best thing," Campbell said. "Just kind of let it go."

After losing his previous three starts, Campbell was a steady force for the Leafs on Thursday stopping 34 shots including a Dubois breakaway.

"I'm blessed to have a lot of great people in my life and people that care," Campbell said. "Ultimately everybody’s point was kind of the same and it was just, 'Have some fun and don’t be too hard on yourself.' It’s a good lesson and something I'll try my best not to go through again, but we're all human."

"He holds himself to such a high standard," said Matthews. "We tell him all the time, 'We win as a team and we lose as a team,' and he's obviously a big part of this team."

Campbell's slump-snapping performance on Thursday was much needed. A couple nights earlier, Keefe had declared that the team's goaltending was a concern.

"He got better as the game wore on, which is a really good sign," said Keefe. "Obviously, there's a lot on the line here, trying to get a win and the game's really tight right to the end and I thought his best play was at the end. Whether it was the penalty kill in the third period or the six-on-five, he just looked really strong and confident. That, of course, is big for him and even bigger for us."

The Leafs had been mired in a five-game winless skid (0-3-2), which was their longest such streak of the season.

"It definitely was weighing on us," Campbell admitted. "We're competitors and we have a high standard in our dressing room."

Bogosian will miss at least four weeks with a shoulder injury sustained during Tuesday's loss in Vancouver.

"He has really come in and delivered on what we wanted him to provide in terms of stability on our third pair, penalty-kill minutes, a little bit of a different look and feel to our defence and, of course, his experience having won a Stanley Cup last season," said Keefe. "You are going to feel that absence."

Zach Bogosian goes hard to into the boards

Thankfully he got up afterwards and skated off pic.twitter.com/0bKr1VG5Ky

Travis Dermott, a lefty, has shifted to the right side to fill Bogosian's spot.

Sandin, who just returned from a foot fracture, is currently playing on the left side of the third pair. Despite suiting up in only four games since the pandemic started, Sandin feels like he's physically prepared for this opportunity.

"I feel stronger overall," the 5-foot-11 Swede said. "I have a little bit more pop overall in my legs during the whole game. I don't feel that I get tired as quick as I did before. Down in the corners I think I can battle and handle guys a lot better than I could last year so I feel stronger."