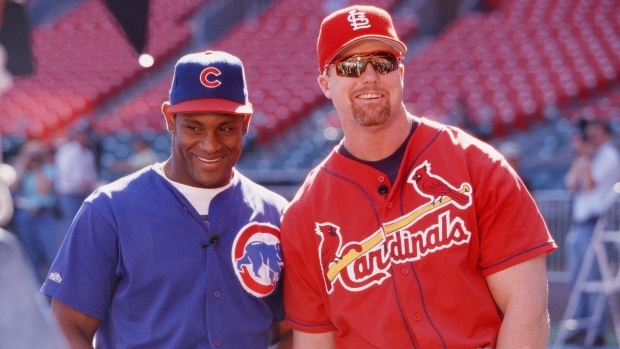 In 1998, with baseball still reeling from the 1994 players strike and cancellation for the World Series, Mark McGwire of the St. Louis Cardinals and Sammy Sosa of the Chicago Cubs embarked on a dual home run record pursuit that would reignite passion in America’s pastime.

The home run chase of 1998 and the controversial fallout that followed are the subject of ESPN’s latest 30 for 30 film, Long Gone Summer, directed by A.J. Schnack, which debuts Sunday at 9pm et on TSN1, TSN4 and TSN Direct.

On September 8, 1998, McGwire stood in the batter’s box at Busch Stadium in St. Louis, one of only two men in the history of Major League Baseball to homer 61 times in a season. With the entire baseball world tuned in, the stadium on its feet and Sosa standing in right field, the Cardinals first baseman would club a Steve Trachsel pitch 341 feet, resetting one of the most important records in the game, a mark that had stood since Roger Maris went deep on the final day of the 1961 season.

The early part of the ‘98 season belonged to McGwire. Coming in off the ‘97 season where he was traded in the middle of the campaign from the Oakland Athletics to the Cardinals, McGwire was looking to build on the 58 homer total he hit split between the two teams.

All eyes were on McGwire and Seattle Mariners outfielder Ken Griffey Jr. as they kicked off the season and the pair did not disappoint coming out of the gate. Griffey Jr. posted 56 homers in ‘97 and the sweet swinging lefty was considered just as much of a threat to reach Maris’ mark in ‘98.

By the end of May, the second full month of the season, McGwire had already hit 27 homers, outpacing Griffey’s also impressive total of 19.

It was in the month of June that Sosa put his name among the marquee home run hitters in baseball.

Prior to the ‘98 season, the Dominican-born righty had never hit more than 40 homers in a season. In June of 1998, Sosa would hit 20 bombs, breaking the MLB record for a single month and inserting himself into the record-breaking conversation.

With 61 in sight, both men entered the month of September with 55 homers to their names.

It was McGwire who caught fire again first, opening the month with consecutive multiple homer games, putting him on the cusp of reaching and breaking the record.

When Sosa’s Cubs came to St. Louis on Sept. 7 to begin a two-game series, it seemed like the perfect storm. The Pomona, Calif., native was up to the challenge, ripping a home run in the series opener to tie the record and set the stage for the main event that would take place the following day.

With Maris’ long standing record conquered, the only question left to answer was, who would leave the ‘98 season as the home run king?

Sosa made another charge, eventually tying McGwire at 62 home runs on his way to posting a season total of 66.

However, five homers in his final series of the season against the Montreal Expos would make McGwire the first player in MLB history to hit 70 home runs in a season and give him the crown as single-season home run king.

In 2010, McGwire would admit to Bob Costas that he used performance-enhancing drugs throughout his career, including during the famous home run chase of ‘98.

While Sosa has never admitted to using steroids or any other enhancer, he was named in the 2007’s Mitchell Report, an independent investigation into the illegal use of steroids commissioned by Major League Baseball.

Schnack tells Uproxx that he wanted to focus more on the chase than the PED scandal that followed it, to give people a sense of what it was like to be a baseball fan in 1998.

“I felt like, yes, we now know that that summer took place in baseball’s steroid era,” Schnack told Uproxx. “But, first, especially for people younger than us, I want to just say this is what that felt like, to be in the middle of that summer.”