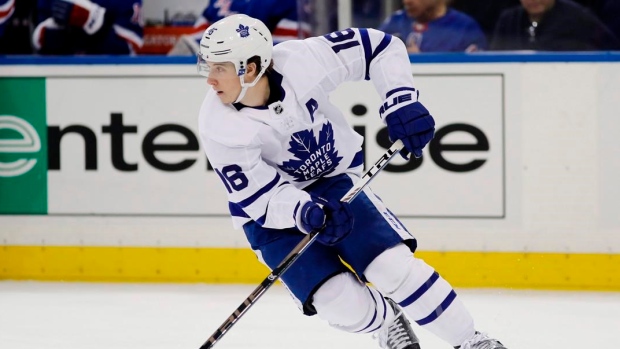 TSN Toronto Reporter Mark Masters reports on the Maple Leafs, who practised in two groups at the Ford Performance Centre on Friday.

Since breaking into the NHL in 2016, Mitch Marner has spoken often about a desire to improve his shot and to shoot more. He sees the issue as being more mental.

"It's just, like, I take an extra second," Marner explained. "It's something I've been doing for a while and trying to get out of my head, you know, trying to be more of a surprise shooter and getting it towards the net rather than being the perfect shot guy. Why it's sometimes an extra second behind is because I'm trying to scan the ice to see what other play I can make."

It's an issue the team addressed with him during the off-season. Sheldon Keefe believes the problem isn't just between the ears.

"It's not just about the shot mentality, necessarily," the coach said. "It's also about his physical shot and working on it and details of it and getting those reps and credit to him because he put in a lot of work."

Marner matched a career high by averaging 2.84 shots per game last season and he reached the 20-goal mark for the third time in his career. But there's more room to grow, including on the power play. Marner didn't score at all on the man advantage last season despite leading the club with almost 172 minutes played.

"You go through the goals Mitch has scored over his time in the NHL on the power play and he's scored, at times, by shooting the puck, beating goalies clean and last season it didn't go his way," Keefe said. "We expect things to bounce back a little bit in that sense, but also with the increased work."

Prior to the goose egg last season, Marner scored 21 power-play goals in 300 games with the Leafs.

Keefe said Marner's improved shot can have a "significant" impact on a power play, which struggled down the stretch last season. Toronto ranked 30th out of 31 teams in power-play percentage after March 4. New assistant coach Spencer Carbery is overseeing the units this season.

"He's got a creative mind," Marner noted. "He's willing to try new things and so is our whole power play. We'll see what happens from there and just let him take the reins. He's already talked to us a little bit about his ideas and I guess you guys will see."

The Leafs haven't done special teams drills at camp yet, but Marner did some work with Carbery after practice on Friday. The 24-year-old usually plays the flank, but Carbery was feeding the shifty winger in the slot for quick-strike chances.

Marner refused to comment on the tactical changes that are in the works.

"You guys aren't getting anything," Marner said with a smile. "You guys can wait and see tomorrow."

The Leafs open their pre-season schedule against the Montreal Canadiens on Saturday night.

Marner should have more opportunities to shoot during the pre-season because linemate Auston Matthews is currently sidelined. The reigning Rocket Richard Trophy winner did not take part in practice on Friday, but skated on his own and, for the first time since undergoing surgery on his left wrist six weeks ago, handled the puck.

"Today, he took another step," said Keefe. "Each day, I think he is going to feel better and get more done."

When will Matthews be ready to join the main group?

"There is no exact date or anything that we are targeting at this point," Keefe said. "We are very confident that it is going to be before the opening of the regular season. Of course, if we can get him into some pre-season games that is even better."

Auston Matthews is back handling the puck this morning — sooner than expected: pic.twitter.com/5SnZnRsikS

Newcomer Michael Bunting has skated on a line with John Tavares so far at training camp.

"He's an exceptional player," Bunting said of the Leafs captain. "That's one of the main reasons I signed here was to get the opportunity to play with guys like him. There's no question why he's the leader here."

"Honestly, his work ethic out there in practice," Bunting said. "He's working hard, hard on the pucks, has a great shot and his vision is unbelievable."

"I'm a guy who likes to get to the net, create space for guys like John and win loose puck battles and be able to put the puck in as well from in front."

"He is a guy that is really hard on the puck," Keefe said, "but also very good and tenacious around the net. He loves to score goals. From the time I coached him in Sault Ste. Marie and he joined as a late bloomer coming into junior hockey in the OHL, he loved to score and was relentless around the goal. He showed that last season in Arizona as well. A lot of the goals he scored — there were not a whole lot of flukey goals there. He was challenging the crease and getting after the net. That is what he does. He has developed some great confidence."

The 26-year-old Bunting has only played 26 NHL games, but excelled last season with Arizona potting 10 goals in 21 games.

"I'm kind of a guy who has that nothing-to-lose attitude so once I got that opportunity I ran with it and was fortunate to have that success and I'm looking to continue that with the Leafs," he said.

The Toronto native, who grew up admiring guys like Tie Domi, Darcy Tucker and Wendel Clark, took less money to sign with his hometown team.

"He really wants to be here and be a Maple Leaf," Keefe added. "The work he has put in this off-season has reflected that. The skill-set he has in terms of being on the puck, being around the net and being able to finish chances is a good fit to play with some of our better players. We are going to give him that opportunity."

Wayne Simmonds revealed that Tavares invited players to his cottage late in the summer as part of a team-bonding initiative.

"We all went up there and trained and had an opportunity to spend time with one another," Simmonds said. "It's huge. You have guys who are new to the team who come to things like that and it gives you a chance to learn about them, to pick their brains, to see what makes them tick and that's what we did there."

It also helped the group move on from the gut-wrenching first-round playoff collapse against the Montreal Canadiens.

"That was one of the main things in going to Johnny's house," Simmonds said. "We had great dialogue with one another and we kept it real. We got to address what happened last year head on and we're not hiding from it. It's for us to learn from and get better and to mature as a team."

"It was a significant trip," said Keefe. "They spent time together and it wasn't just time relaxing on the water. They got some work in while they were there, too, skating and training ... I don't know a whole lot that went on there. I don't want to know because it's their time to do that. But John's initiative to do it speaks to his leadership and his growth. He has established himself here over time as the captain and leader of this team. I think it was a very positive step for us that sets us up for success going into camp and into the season."

David Kampf is new to the Leafs, but the former Chicago Blackhawks centre knows exactly what is expected of him.

"My role is to play in the defensive zone, on the PK and I can help on faceoffs," the 26-year-old Czech native said.

"I don't have a number for goals or assists [in mind], but my goal is to shut down the best players in the NHL," he said in a matter-of-fact tone. "That's my role. If I score some goals it would be good, but on this team we have so many players who can score goals."

That's music to the ears of Keefe.

"He knows exactly who he is and what he does," the coach said. "He has done a very good job of it around the league. I have had a number of NHL coaches reach out to me and talk about how much respect they have for Kampf's game and what he does. That includes Jeremy Colliton in Chicago. To put together successful teams, you need guys who are very comfortable in playing those types of roles."