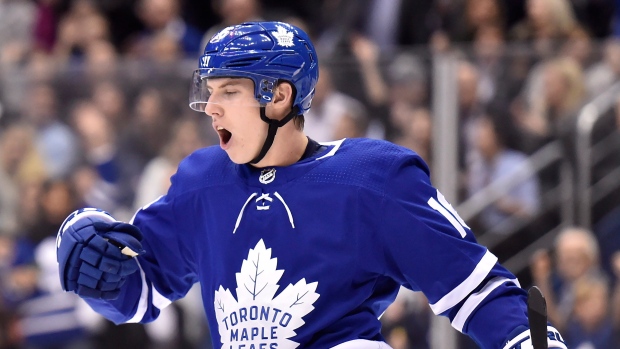 Now that Mitch Marner and the Toronto Maple Leafs have a six-year, $65.358 million contract extension done, the forward joined TSN Hockey Insider Darren Dreger to discuss how it all came together the last 48 hours.

The 22-year-old said he pushed hard in the last two days to get a deal done before training camp started.

"I knew we were close, so I just wanted to be more a part of it," said Marner. "The last 48 hours or so, I made sure that I expressed to Kyle [Dubas] a couple of times on what the feeling was and what we had and what we wanted to do going forward.

"It’s a nice relief. I was walking my dog, I had a 13-year-old kid yelling at me across the park screaming at me about not signing and stuff like that so you know that’s the Toronto fanbase. It's great to be a part of it for another next six years."

Last season, Marner led the Leafs in assists (68) and points (94) in 82 games played and scored a career-high 26 goals in his third season. As the summer went on without a contract, Marner remained optimistic that a deal would get done.

"I felt that always something was going to happen, we were always going to get something done," said Marner. "I trusted Darren [Ferris], my agent, to make sure that he let Kyle know we’re fully 100 percent locked on trying to always be here.It came down to yesterday and two days ago that we were really dialed in and got close and started really figuring it out."

"I remember when Willy came back, and he was saying how much of a grind it was mentally, physically, not being with the team." said Marner. "Especially in his first couple games back, how it was to get back into game shape and how quickly he had to get back on his feet. I mean like were saying earlier, the Toronto fanbase is passionate about their team but they're not afraid to let someone know if something's not going well."

Marner did however express disappointment at some of the social media reactions surrounding the negotiations.

“I mean social media has got its benefits, it's good for certain things but its also good for a lot of bad things," says Marner. "People express their hate for people on there and it's something a lot of athletes go through on social media with the hate. It's more so seeing the stuff said about my family, it made me disappointed and mad. I expect this stuff to come at Darren and myself but you know I saw a couple comments about my father and stuff like that no one is going to like seeing or reading. It’s pretty disappointing seeing people express themselves about my family and my family name.”

The Maple Leafs have made the playoffs the last three seasons but have been bounced in the first round all three times. Back-to-back Game 7 losses to the Boston Bruins have ended the last two seasons on a sour note. The Leafs subtracted players like Nazem Kadri, Jake Gardiner, Connor Brown, Patrick Marleau, Ron Hainsey and Nikita Zaitsev in the summer but notably added Tyson Barrie, Cody Ceci, Jason Spezza and Alexander Kerfoot.

"I think so," said Marner when asked if the Leafs should be considered a Stanley Cup contender. "We haven’t been happy with ourselves the last two playoffs and I think everyone knows that but we got a little older in depth, I think Kyle did what he had to to try and make our team better. It should be a fun year, we have a lot of skill and talent on this team but we've got to make sure that we come ready to work everyday and nothing is going to be given to us."