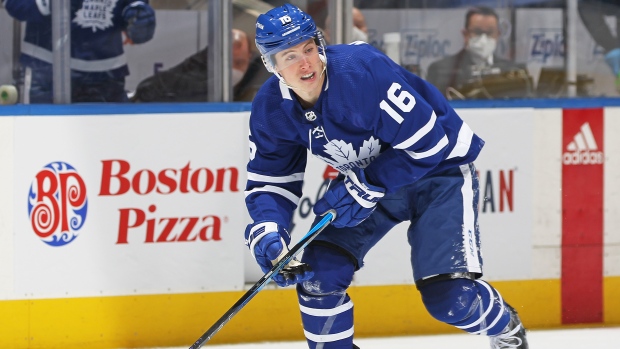 The Maple Leafs held an optional skate at Little Caesars Arena on Saturday.

In his first media availability after returning from the COVID protocol, Mitch Marner announced that he wanted to become more of a scoring threat.

"I know I can score," he said on Jan. 14. "I got to make sure I get that mindset in my head and that's what I got to start bringing out more."

The dynamic winger has proceeded to score in four straight games. He only had six goals in the first 26 games he played this season.

"He's come back with a clearer head," observed head coach Sheldon Keefe. "You get time away and you come back and you just go out and play. He's scored some really great goals for us."

This is the third time that Marner has scored in four straight games in the National Hockey League. If he gets on the board in Detroit on Saturday night he will establish a career-best streak.

"Usually he's the passer out there," noted left winger Michael Bunting, "but now he's scoring so that's really good for us."

Marner is still setting up goals as well. He has three assists in the last four games.

"Mitch's on fire," said defenceman Travis Dermott. "He definitely makes it easier on us when he's buzzing like this."

Marner has produced in every way since his return. He has scored while killing a penalty. He has scored at even strength. He has even scored on the power play. Marner had gone 100 games between man-advantage markers before ending the drought last week in New York. He added another power-play goal on Wednesday by beating Ducks goalie John Gibson on a one-timer from distance.

"It is big for confidence," Keefe said. "He's taken that shot a number of times and it hasn't gone for him, so it's a good sign that things have been working out positively for Mitch. He certainly deserves it, because of the type of looks he generates not only for himself, but others."

Marner finished with six shots on Wednesday, which was his highest single-game total since Oct. 27.

Wednesday was also Marner's first game back on a line with John Tavares. The pair experienced success together in the past and that chemistry was apparent.

"Mitchy's style of play, he just makes it so much easier for his linemates," Tavares gushed. "His ability to read the play, his poise and deception and the ability to draw people to him, he's just got eyes everywhere. He's just so good at finding the open man and making the right decision nine out of 10 times. Nine and a half out of 10 times. He's so good at it."

Marner, though, sees room for improvement for the line, which also includes Ilya Mikheyev.

"There were some plays we can talk about going forward and trying to find that F3 to escape pressure and get the puck with more control and then make plays off of that," Marner said. "We worked extremely well in the D-zone and didn't give up a lot."

Since Keefe took over behind the bench, he has played Marner with Auston Matthews most of the time. When it's not Marner, it's usually William Nylander on the top line with Matthews. But with the Leafs trying out a new balanced alignment this week, Matthews currently finds himself flanked by Bunting and Ondrej Kase.

"There's different dynamics," said Keefe. "Mitch has the puck a lot on his stick so Auston spends a lot more time moving around and trying to get open and finding space that way. Kase is more of a forechecker and he's going to go and get after the puck and create more loose-puck situations for Auston to be the guy with the puck. It creates more action in and around the net and we've seen Auston excel in that area as well."

Kase is a former 20-goal scorer in the NHL, but he's not Marner, who was a first team all-star last year.

"We've seen Kase's ability to make a play and do those things as well, but there's a lot more pucks available for Auston to handle and distribute and play a little more of a give-and-go game," Keefe noted. "We like that. Of course, he plays give-and-go quite a bit with Mitch as well, but Mitch is a puck-dominant player and there's some adjustment there for Auston in terms of playing with Bunting and Kase."

Kase has proven adept at winning the puck back for his linemates.

"On the forecheck, yeah, he goes balls to the wall and he ain't afraid of going to the corners," Bunting said with a grin. "He works hard and he's always on the forecheck. He's able to make plays as well. He's not just a grinder. He has a lot of skill to his game as well."

Per NaturalStatTrick.com, shots favoured the Leafs 7-0 in the 11 minutes and 43 seconds that the Matthews line was on the ice in five-on-five play against the Ducks.

Matthews has gone three games without a goal, which matches his longest drought of the season. It also happened once in November and once in October.

Matthews does have three assists in the last three games.

Like Kase, Bunting brings a blue-collar element to the top line. The rookie's determination to chase the puck into dirty areas has allowed him to draw 25 penalties this season.

Has Bunting been keeping track of that statistic?

"No, I honestly can say, 'No I haven't.' I didn't even know there was a leaderboard for that."

Bunting is second only to Edmonton's Connor McDavid (26) in penalties drawn this season.

Dermott starts laughing when asked what makes Bunting so good at eliciting calls.

"Well, ah, I don't want to say, 'Rat,' by any means, but he loves to get out there and get in guys' faces," Dermott said, "and with his work ethic it gets on guys' nerves a little bit. He's never backing down from a battle no matter how big a guy is and that gets guys edgy and they take a couple shots at him to try to get him off his game."

Dermott points out that Bunting's style leads naturally to calls.

"It works so well with his game without sacrificing any of our team play," Dermott said. "That’s almost a skill. It's a big aspect for our team that we love to see that out of him."

Bunting stresses that he doesn't think about drawing penalties.

"I've never been warned by a ref for embellishment," he said. "And I try not to embellish. I don't want to embellish out there."

The Leafs have blown multi-goal leads in five of their last seven games. However, they have still managed to win four of those fives games.

"It's easy to get down when you give up a lead," Jason Spezza pointed out. "It's easy to feel like things aren't going your way or you've lost momentum. The group's been really resilient this year when things haven't gone the way we want them to go and just being able to flip the switch quick whether on a practice day and moving forward or collecting yourselves heading into an overtime."

The Leafs are 20-0-1 when leading after two periods this season.

"I just think there's been a lot more of a mature approach towards winning games," Spezza continued. "Some nights it's going to be clinical where you're dominating teams and everybody's happy and it looks good and everybody talks about how good you are and other nights it's going to be a little bit ugly and you find a way to win and you still drag those points out and you gain confidence from it."