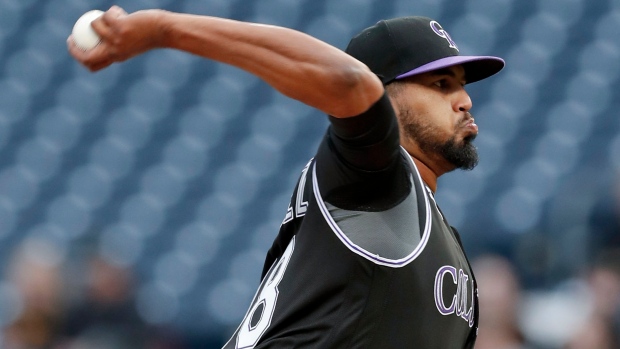 PITTSBURGH — German Márquez could sense his delivery speeding up. So the Colorado Rockies pitcher made a concerted effort to slow things down, putting a halt to his team's four-game losing streak in the process.

The 24-year-old struck out seven over eight dominant innings in a 5-0 victory over the Pittsburgh Pirates on Tuesday night, never allowing a runner to third base while giving up three hits and just one walk.

"The first couple innings I was a little quick with my mechanics," Márquez said. "I made that adjustment after that, and all my pitches seemed to be there after that."

Aside from a sinking line drive by Pittsburgh's Bryan Reynolds in the first that scooted under the glove of leftfielder David Dahl and turned into a double, Márquez (5-2) overwhelmed the Pirates. He retired 10 straight at one point and sent down nine of the final 10 batters he faced after getting out of a two-on, two-out jam in the fifth.

"He was sharp," Pirates manager Clint Hurdle said. "He was really tough on the right-handed hitters. We weren't able to string anything together against him."

Trevor Story hit his 11th homer of the season for the Rockies. Charlie Blackmon went 3 for 5 for Colorado, including a two-run triple to left off Chris Archer (1-4) in the fourth. Story homered for the second straight game when his shot to deep left field in the third inning glanced off the glove of Pittsburgh leftfielder Bryan Reynolds and into the seats.

That was more than enough offence for Márquez, who gave the Rockies just their second win during their current eight-game road swing by shutting down the surging Pirates. Márquez improved to 4-1 in his career against the Pirates and lowered his road ERA this season to 2.08.

Pittsburgh came in off a 7-4 road trip through St. Louis, Arizona and San Diego but never found its footing against Marquez. First baseman Josh Bell — who entered the game with a major-league leading 44 RBIs, the third-most by a Pirates player through 44 games since it became an official statistic in 1920 — went 0 for 4. Bell's teammates didn't fare much better. Pittsburgh mustered only Reynolds' double and a pair of singles in the fifth by Melky Cabrera and Francisco Cervelli.

The Pirates have been able to keep pace in the crowded NL Central despite a patched together starting rotation. Archer — who missed three weeks with inflammation in his right thumb before returning last week — was hoping to go deep to give Hurdle more options for Wednesday, when reliever Montana DuRapau will work as an "opener."

Instead, Archer needed 23 pitches to get through a scoreless first inning and 92 in all while allowing four runs, three earned, in five innings.

"If I could have made a couple of pitches, some key pitches, the outcome of the game might have been a little different," Archer said. "Looking at the bright side, it's a step in the right direction. I felt like I had more left in me."

Archer could have used a break or two, too, in an effort to get his first win since April 7. It didn't happen. Daniel Murphy led off with a double and moved to third on a grounder by Ian Desmond. The Pirates appeared to have Murphy caught in a run down between third and home after a grounder by Tony Wolters, but Cervelli's flip to third baseman Colin Moran deflected off Murphy's helmet and rolled away from Moran, allowing Murphy to score. Story's shot to left in the third pushed him into a tie with Nolan Arenado for the team lead in home runs.

"With the ball that went off Bryan's glove, the dude hit it a long ways," Archer said. "Good pitchers get out of those situations, they minimize the damage. I was really close but came up a little bit short."

"There comes a point in time where as a manager, just want to take a stand for a player," Hurdle said. "I had a couple of looks. Obviously, they had more looks. I disagreed."

Pirates: RF Gregory Polanco was a late scratch due to finger discomfort in his left hand. ... Cervelli left in the sixth inning with an upper chest contusion after a foul ball appeared to hit his throat. ... LF Corey Dickerson (right shoulder sprain) threw to bases and participated in batting practice.

Pirates: Could use an "opener" again on Wednesday.