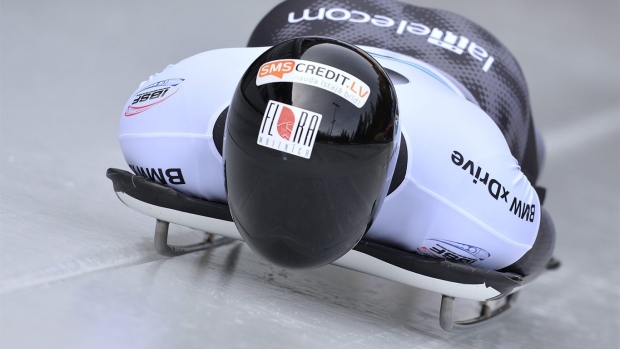 Dukurs took the gold, while German sliders Felix Kisinger and Axel Jungk won silver and bronze, respectively. The win pushed Dukurs past Russia’s Alexander Tretiakov for the series lead, with just one race left — on home ice for Dukurs in Sigulda in two weeks.

Tretiakov finished sixth and now trails Dukurs by 21 points in the standings. Dukurs can clinch the title with a win or runner-up finish in Sigulda, regardless of what Tretiakov does.

Germany’s Tina Hermann won the women’s race, trimming a bit of the gap between she and fellow German Jacqueline Loelling for the points lead. Loelling was second and leads Hermann by 53 points with one race left.

Loelling needs only a sixth-place finish in Sigulda to win her third overall title in the last four years. She hasn’t been lower than fourth in any race this season.

Austria’s Janine Flock was third and remained third in the points standings. The top U.S. women’s finisher was Kendall Wesenberg, who placed eighth — her best showing this season in a race away from home ice in Lake Placid, New York.

Ottawa's Mirela Rahneva was fourth, just one-hundredth of a second back of Flock.

Jane Channell of North Vancouver, B.C., was 10th and Madison Charney of Brooks, Alta., was 20th.