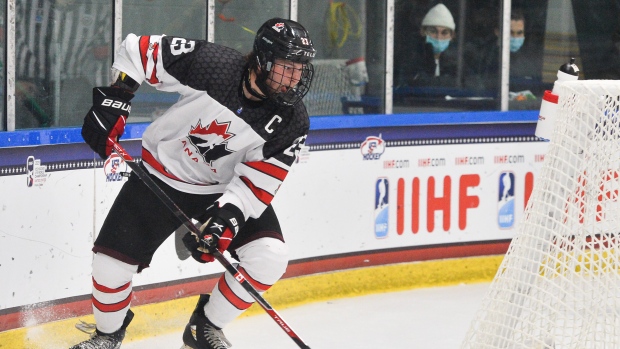 "We swept a playoff round in Switzerland and then I had to come back [to Canada] and we were undefeated so I couldn't shave it," he explained. "We didn't lose a game at the U18s. I would've shaved it if we had lost a game."

With the Ontario Hockey League season suspended due to the pandemic, McTavish played in the second-tier Swiss League, scoring nine goals and 11 points in 13 regular season games with EHC Olten. Then, after putting up seven points in four playoff games, McTavish returned home to prepare for the IIHF Under-18 World Championship.

McTavish, a product of the Ottawa Valley Titans program, is a bit superstitious, so the facial hair remained untouched, giving the 18-year-old a more mature look at the tournament in Texas. Were any of his teenaged teammates jealous?

"I know [Regina Pats phenom] Connor Bedard was a little bit, but he's only 15 so I'm sure it will come soon," McTavish said.

After recording five goals and 11 points in seven games while helping Canada win the gold medal, McTavish finally dusted off his razor.

"I've trimmed it a lot recently so it's more tame now, but I'm sure it could use another trim," he said with a grin.

You can understand why McTavish doesn't want to change much considering how well he's played. He finished No. 2 on NHL Central Scouting's final list of North American skaters.

"Super humbling to be that high on a draft list but, I mean, it's not an NHL team selecting you so just going to have to wait until July 23."

McTavish spoke to TSN about his experience in Switzerland, going at it with Philadelphia Flyers captain Claude Giroux during summer skates, and where his game has grown during this strange season. The following is an edited transcript of the interview.

Where do you feel your game has improved the most this year?

"My speed. I worked a lot at it in the summer doing explosive workouts: jumps and squats and some deadlifts."

Is there a certain area of the game where you felt that really benefited you?

"Yeah, neutral zone with transitions and getting up ice faster. The game's so fast nowadays and everybody can work on their speed so that's what I keyed in on."

How do you feel you held up against older guys in a professional environment in Switzerland?

"I did pretty well. It's always a culture shock going over to a new country, especially during a global pandemic, but I thought I got really comfortable right away and gained confidence each and every game."

You were born in Zurich when your dad, Dale McTavish, was playing in the National League but, that said, was there a welcome-to-Switzerland moment for you this season?

"Nothing too crazy. I lived there until I was 10 so it wasn't too bad. We couldn't go many places with COVID and stuff so it was pretty normal."

You also followed in your father's footsteps by playing for the Petes. What's the No. 1 thing you learned from your dad?

"Just to have fun. He always touches on that. That's why we started to play the game. It's a fun game so he always makes sure I'm having fun. I can see how much fun he had and the passion he had for the game."

What did you take from the experience at the under-18 championship?

"It was awesome. Any time you can wear that Canadian jersey is super humbling and obviously we won gold too so that made it even better."

When Team Canada captain Shane Wright was hurt and missed a game, you wore the 'C' in his absence. What was your reaction?

How would you describe your leadership approach?

"I'm more of a vocal leader. If someone chips the puck out on the penalty kill, the coach probably isn't going to go out of his way to tell him, 'Great chip on the penalty kill.' So, that's where I like to just stay super positive on the bench. And, obviously, you need to lead by example too. You got to go out and do the same things you're telling the other guys to do."

You roomed with Connor Bedard at the tournament. What did you learn about him?

"Honestly, he's a great player and even better person too. He got more confident each and every game. You saw him at the gold medal game, I think he was at his best. When your youngest player is one of your best players, it says a lot about him. He can step up in big games. He's going to have a great career in the NHL."

How would you describe your game?

"I'm a power forward, who takes a lot of pride in his defensive zone and two-way ability. Obviously, I love to score goals too."

You also play with an edge. In an article in The Athletic, skills coach Pat Malloy mentioned you actually got into it with Claude Giroux at a summer skate last year. What happened?

"It was nothing too crazy. We didn't fight or anything. We're both super competitive guys and he was on the other team and we were doing five-on-five [work]. It was a close game, next goal wins or something, and there was a couple slashes or something. Nothing crazy. Yeah, I think we won that game, actually, so I guess I got the last laugh."

Did you guys talk about it after?

"No, but we skate together quite a bit and we're obviously fine now. I'm sure he loves it. He's an intense guy and it's the closest thing to playing in the NHL in the summer. I'm sure he loved it."

MICHIGAN MOCK: @CraigJButton has Owen Power to Sabres; Matty Beniers to Seattle and Kent Johnson with the #Canucks in his post-lottery Mock Draft - https://t.co/7cOwKwooLQ#TSNHockey pic.twitter.com/BRZNPl1c1r

TSN's Director of Scouting Craig Button sees a lot of Ryan O'Reilly in you. Who do you consider your NHL role model?

"I like the way Brayden Schenn plays. I like watching him play and see little things he does and try and add them to my game."

Can you give us an example of a little thing you've seen in his game that you've tried to incorporate into yours?

"Just how hard he works. He works super hard. He's always there on the back check and forechecking super hard and he wins a lot of face-offs. I take a lot of pride in face-offs too so just little things like that."

What are you focused on this off-season?

"Working on my acceleration and speed again like last year. The same sort of stuff in the gym and on the ice. Just duplicating what I did last year."

"I work out with Sean Young, who's the [Ottawa] 67s and REDBLACKS strength coach. I work with him from 9-11 and then I skate from 1-2 and then I try to golf at the end, but sometimes I'm pretty tired."

What's something, other than the beard, that you'd stick with if things are going well?

"I never tape my stick in intermissions. Even if it's super messed up, I'll leave it. And normally I'll go black tape too. Simple stuff like that. I find it helps me dial up for the game."