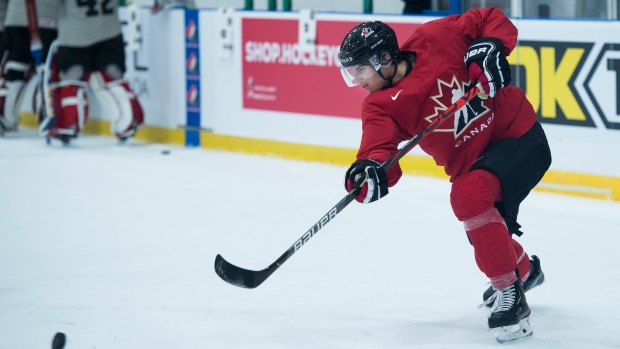 "Right away it's just disappointment," a​dmitted Lethbridge centre Dylan Cozens. "It's tough with all the hard work we've put in the last nine months and now we have to take two weeks off this close to playing again. It was disappointing for everyone."

After t​wo players tested positive for COVID-19 earlier in the week, the other 44 players as well as the coaches and staff were deemed close contacts and subject to a m​andatory 14-day quarantine per an Alberta Health Services order.

"People were angry and pissed off, but once the emotions wore off we just realized it's something we have to deal with," said Cozens, one of six returning players at the camp. "We got to turn the negative into a positive and find a way to use this to make us better."

What does the stoppage mean for Canada's World Junior selection camp? https://t.co/2s7p1XFuqh pic.twitter.com/RN52tMoovr

The players broke up into different virtual committees to help plot how to make the most of the fortnight inside their Red Deer, Alta. hotel rooms. The next practice isn't until Dec. 7.

"I think everyone now has a different outlook on it than when we first found out," Cozens said. "It's out of our control. We just got to do it. There's no point whining. We just got to be positive about it and we'll get through it."

Cozens, a native of Whitehorse, spoke with TSN about what life in isolation is like for the players. The Sabres first-round pick in 2019 also recapped a busy first week at the camp, which featured two scrimmages, an ankle injury, a benching at practice and some instant chemistry with Connor McMichael.

Can you give us a sense of what a day in quarantine is like?

"Two guys are assigned each day at 8:30 to send in a motivational video or quote or something to get us started off the right away and then we have a Zoom workout at 10 every day. We've actually been able to get a sweat on so those have been good. And then it's on-our-own time until 4:30 when we have another Zoom call, just a quick one there, and then at 7 pm we do a social thing whether it's like tournaments over Zoom or just stuff like that. In between those times I'm just playing video games with a bunch of the boys."

How much of a workout are you able to do?

"We just got the bikes [Saturday] so those will be huge in maintaining conditioning in our legs. Everything's been body weight [exercises] pretty much so it’s been lots of movements, lots of abs and push-ups, stuff like that, lunges and jumping and just everything you really need. So, we found a way to do it and it's been good."

A call went out and the Red Deer fitness community pulled through!

Which committee are you on?

"I think I got the best committee. I'm on the food committee so I get to help decide what we eat and what is brought to our rooms. I'm happy to have a voice in that."

Alright, so, what's on the menu?

"Well, we actually haven't started yet. We just made these committees a couple days ago and all the food orders had been out for the last week so we don't really start until Tuesday, but, you know, I'll take some requests from the boys and see what everyone wants."

"I think everyone would be with me on this one, it would be a nice steak. That's at the top for me, for sure."

I heard the social committee was planning a poker tournament last night. How'd that go?

"We were supposed to, but the Wifi at the hotel is blocking it so hopefully we're going to get that done at a later date."

What's your video game of choice and who are you playing with?

"Right now, the game of choice is the new Call of Duty: Cold War and everyone's getting on that. I was back in London six weeks before this so my new gaming buddies are [Saginaw defenceman] Mason Millman and [Saginaw centre] Ryan Suzuki, but we're starting to play with everyone now."

Have there been any guest speakers yet? Any idea who will be Zooming in?

"We had [Hockey Canada president] Tom Renney the first night and obviously he's a very important part of Hockey Canada so it was good to hear from him and what he thought about all this. I think we'll have some exciting people talk to us, for sure."

What will the challenge be like on the ice when you get through this?

"Once this quarantine's over the tournament's not that far away. We still have some time, but we got to get back into shape as quick as possible. The bikes in the rooms will be huge for keeping us in shape. Once we get back on the ice the practices are going to be as competitive and intense as ever. Everyone has all this energy bottled up for the last two weeks and once we're free to get back on the ice we're not going to take it for granted. I think it's really going to help us in the long run, actually."

You blocked a shot and left Sunday's scrimmage, how are you feeling?

"It hit me right on my ankle bone and I thought it'd be another stinger. I went to walk it off quickly, but it was throbbing still and I didn't want to push anything this far out from the tournament so I decided to call it there. But it's nothing major. It's just a minor thing and I've been icing it and it’s definitely good now."

Working on his release, Cozens aims to emulate Eichel.

"The games have been super competitive and intense. It's been a long time since our minds have had to think that quick, but they got us back into it right away. Right off the bat, the practices were 110 per cent and whipping us back into shape really quick."

You played on a line with London Knights sharpshooter Connor McMichael. What was the chemistry like?

"It was good. He's obviously an unbelievable player. His shot is next level so I wanted to find him. The games were tough. It was hard to create much, but he's a player that I would definitely like to play with because if you find him you know he's going to bury."

Did anyone stand out and impress you in the first week? Did anyone look like they had a great off-season?

"To be honest, [Vancouver Giants defenceman] Bowen Byram. He definitely took a huge jump this off-season. He was great to begin with, but now he's taken his game to another level. He's so calm out there, so shifty, agile and just watching him with the puck and go around the O-zone, I could tell something switched with him in the off-season and he's a whole new player."

There was one practice where you and Chicago Blackhawks centre Kirby Dach showed up a bit late and spoke with coach Andre Tourigny who gave you the option of joining in or sitting out to send a message to the entire group. You guys ended up sitting out. What did you take from that?

"It shows you got to show up early for everything. We got out there and we didn't get out there on time so that's on us. It's something we know is not going to happen again with anyone now. It sucked for us, but it was our fault. We weren't out there. We weren't ready to go so that's something we just got to wear. But I think going forward it set a good example of what the standard is on this team and what standard our coaches hold. It's a good learning experience for everyone."

You've worked with Tourigny in the past. How would you describe the tone he's setting?

"He's a strong, passionate coach. He doesn't take anything lightly. He holds guys accountable and he runs a really tight ship and that's why he's been so successful in Ottawa and with his teams. He brings everyone to a system and once guys follow that system and everyone buys in, you know, the team's going to be pretty much unstoppable. He was my head coach at Hlinka [Gretzky Cup] too and assistant coach last year [at the World Juniors] and we've built a good relationship. He's a coach I definitely love to play for."

“That showed a lot of humility and courage...”

Team Canada 🇨🇦 head coach Andre Tourigny on Dylan Cozens and Kirby Dach agreeing to sit out the early skate on Thursday to set an example for the other players - https://t.co/XnvQWTAW8n#TSNHockey pic.twitter.com/mD3uQmnDN9

During your first media availability at the camp you were asked a question in French, but answered in English. How good is your French?

"I actually did French immersion at elementary school and grew up doing French so I can speak French. I can hold a conversation, but I'm not quite there to do it in interviews and on camera. I can understand it and it’s something I want to keep improving on and I want to become fully bilingual."

Does that help you relate to the Quebec Major Junior Hockey League guys?

"Yeah, every time I've been at a Hockey Canada event I always try out my French and see where it's at and try talking in French as much as I can. It's definitely a good tool to have."

You skated and trained with some pro guys in London, Ont. before coming to the selection camp, including Vancouver Canucks captain Bo Horvat. What did you pick up from him?

"He's a superstar in the NHL so just to be out on the ice with him, it was good to learn from a guy like that and how he does everything. You know, he messes up and he restarts a drill and just everything is so technical and there's so many skills that he has and his release on his shot is sick too. He's a player I was fortunate to skate with a bit this off-season."