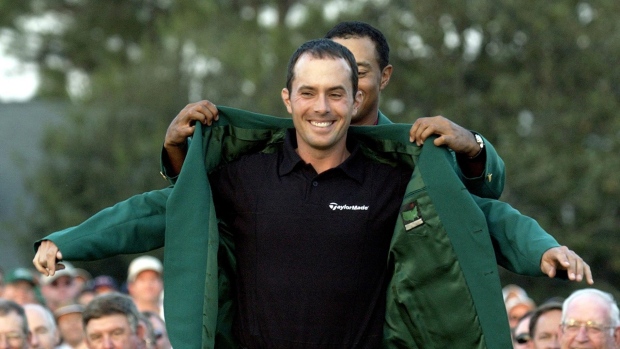 Mike Weir gets his green jacket from Tiger Woods , The Canadian Press

There are a select few moments in Canadian sports history where people remember exactly where they were. They know whom they were with, how they watched it, and how they felt.

One of them occurred in April 2003, when Mike Weir tapped in a short putt to win a playoff and capture the Masters. It set off a nationwide celebration for the guy from Bright’s Grove, Ont., who became the first Canadian and the first lefthander to slip on the Green Jacket.

I know where I was that day. I was standing beside the 10th green, peering through a crowd to see Weir, dressed all in black, raising his arms in the air with a wide smile across his face.

I followed him around the course that day, alongside my colleague Rod Black and hockey legend Paul Coffey. I’m still not exactly sure why Coffey was with us, but on that day, no one really cared.

We were alongside a gaggle of Canadian fans, collectively rolling through our emotions with every one of Weir’s swings. No one rode the highs and lows of the day harder than Mike’s father, Rich, who confessed to me along the way that his stomach was roiling with every shot.

There are two moments of that day that are imbedded in my memory. The first was on 13. Weir’s second shot on the par-5 came to rest on the back fringe, about 40 feet from the hole.  His eagle putt came up over a rise and rolled past the cup with a healthy dose of speed. I clenched every muscle in my body to get it to slow down, watching it come to rest about 12 feet from the hole.

Without showing a hint of emotion, Weir stood over the birdie putt, stroked it and about six inches from the cup, he knew it was in. His left hand punched the air and the image of that celebration became the silhouette for his logo.

The second was on 18 when his 4-iron to the green came to the crest of a rise and then rolled back down. His birdie putt for the win climbed that same crest, this time making it over but coming up seven feet short.

There was a murmur from the patrons as Weir walked to his ball, again without any show of emotion. That putt was already out of his mind. He was already stalking the next one.

We all know now what happened next, but at the time, it was unbearable anticipation. I have heard from family, friends, colleagues, golf professionals and even complete strangers about how hard it was to watch that putt.

Ian Leggatt, a PGA Tour winner himself, told me he had to leave the room because watching Weir navigate that seven feet was just too hard. A man I met at a golf event a few days after told me that when the putt went in, he jumped out of his chair and accidently punched a hole in his ceiling.

Full disclosure: I couldn’t watch either. I decided to close my eyes and let the patrons tell me how it came out. The roar went through my body.

The playoff was almost anticlimactic. Weir seemed in control from the moment his opponent, Len Mattiace, hit his second shot down into the second cut among some trees. Weir tapped in for a winning bogey, probably the best bogey of his career.

Weir’s victory that day didn’t just change his life, it also changed Canadian golf. He gave inspiration to an entire generation of players that are now playing on the PGA Tour.

Ask Adam Hadwin, Corey Conners, Nick Taylor, Graham DeLaet and David Hearn where they were when Weir won, and they can remember it as if it was yesterday. They will tell you what an inspiration it was to have a Canadian win at Augusta National and what it meant to their careers.

It’s no surprise that after Conners, Taylor and Hadwin all qualified for this year’s Masters – whenever it ends up being held – they collectively reached out to Weir for a practice round.

The last memory I have of that day that changed Canadian golf came in the men’s grillroom at Augusta National.

The winner has a long list of tasks before he can truly celebrate. There’s the Green Jacket ceremony in Butler Cabin and another outside on the putting green. Then he’s driven over to the media centre to meet with the press – that year the start of the conference was delayed because Weir was on the phone with Prime Minister Jean Chretien – and then it’s back to Butler Cabin for a drink with the chairman, into a full sit-down dinner with the members and finally over to the main clubhouse for a handful of one-on-one interviews with rights holders.

It was close to 11 p.m. when Weir and a small group of Canadians gathered around the bar for a beer, all the formalities finally over with. We laughed, and joked about the day and Weir told us about special moments of his round.

He was in his Green Jacket, of course and all I could think about was how it seemed to fit him perfectly, as if it was made for him.