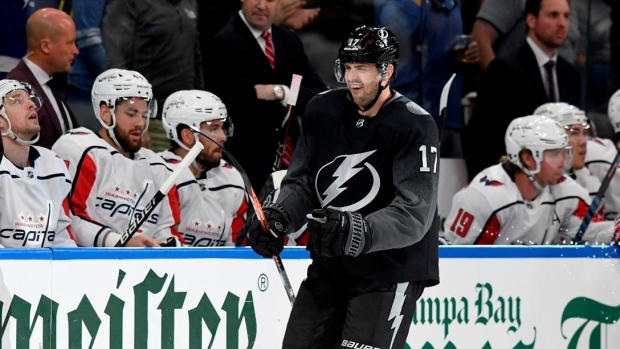 With the National Hockey League season on pause, ​​Alex Killorn is getting outside his comfort zone.

The Tampa Bay Lightning forward has launched a show on Instagram called Dock Talk with Killer. The premise is simple: Killorn interviews notable sports figures from his jet ski.

"The first one was the toughest," Killorn said. "I only thought I was going to do one episode at first, so I thought I'd get the big boys out of the way. Hedman said he'd do it and the other two said they weren't going to do it, so it took a bit of prodding. That was right in the middle of quarantine, so I told Stammer I would get him some eggs and antibacterial wipes if he'd come on the show."​

Killorn came up with the show idea when the Lightning'​s media relations staff asked him to record a video wishing fans well during the COVID-19 pandemic. The 30-year-old Harvard product had seen similar videos populate social media and wanted to do something a bit more creative.

"I woke up on the morning of the first show and was like, 'Why did I agree to do this? It might be stupid, and people might not like it,' but then I was like, 'You know what? Let's just do it.' And now it's got some legs and it's been going well. It's been good for me, because it's been something different. It's been a lot of fun for me to do this and break out of my shell a little bit."

The relaxed format has led to some fun and insightful banter as Killorn relays questions from fans and also asks some of his own.

During the first segment, Stamkos predicted that Toronto Maple Leafs centre Auston Matthews will be the next player to score 60 goals in a season. No one has hit that milestone since Stamkos in the 2011-12 season. Matthews was on pace for 55 this year.

The second episode of Dock Talk featured defenceman Mikhail Sergachev and retired players Dan Girardi and Ryan Callahan. Sergachev looked back on a fight with Canadiens captain Shea Weber, while Callahan relived the Brad Marchand licking incident from the 2018 playoffs. Girardi shared a story about how Brandon Dubinsky got pranked during their American Hockey League days. ​

"The guys kind of speak a little more freely with me. I'm buddies with them, so we sort of talk like we normally talk," Killorn said. "I don't want to get them in trouble, so I don't ask too many questions. I just want to give the fans a little more of their personality."

Vezina-winning goalie Andrei Vasilevskiy will appear on the third episode, which is set to stream live on Killorn's Instagram account Thursday at 6:30 p.m. ET.

"I'm sure you know he's one of the toughest interviews to get in hockey because he doesn't like talking to the media," Killorn noted. "But he's decided to talk to me on a jet ski. These are things that wouldn't happen typically and it's fun for the fans to see."

Killorn says Vasilevskiy actually has a great sense of humour, which he'll look to coax out.

You can count the Lightning's general manager among the fans of Dock Talk, which also showcases the beautiful Tampa weather and scenery.

"I was talking to Julien BriseBois and he was thanking me, because he said it was great for free-agent recruiting," Killorn said with a chuckle. "I live on a canal. Callahan lives three doors down. Stammer lives on the open bay, the big money [area], he and Hedman live out there. I think there's 10 of us on the team, including retired guys, who live on the island."

Killorn lives in the Davis Islands neighbourhood and there are a limited number of interview targets. So he's branching out to other sports for Thursday's episode, with Buccaneers tight end Cameron Brate and Rays outfielder Kevin Kiermaier, a three-time Gold Glove winner, lined up.

.@akillorn19 has QUITE the crew lined up for Dock Talk this week.

Tune into his IG Live tomorrow at 6pm ET! 😎 pic.twitter.com/xlqNUcNGHU

And Killorn is aiming high when it comes to future guests. His white whale, so to speak, is new Buccaneers quarterback Tom Brady.

"I've been talking about it since we started this thing," Killorn said. "I think a couple texts have been put out to his agent. I'm sure he gets a ton of texts that way, but you never know. He golfs close by, so maybe we'll run into each other on the course or something like that."

With Pepsi now ​signed on as a sponsor, Killorn is hoping to do a show every 10 days or so, which means he has to cast a wide net when it comes to possible guests.

Killorn wants to keep the show going, because it's become about more than just giving fans something to watch during the season pause. Dock Talk shirts are now for sale at TampaBaySports.com with all proceeds going to the Hillsborough Education Foundation.

"There's a lot of kids who live below the poverty line that aren't able to keep up in school right now because the schools are​ closed," Killorn said. "To keep up in school you have to have WiFi, you have to have a laptop, you have to talk to your teachers and these kids don't have the resources. To fall back in school at that age, fourth grade or whatever, it's really detrimental, so we're going to be using all the profits to help these kids continue with their school so they can finish up this year."

Dock Talk shirts are now available at https://t.co/Apenocvszu. These things are gonna sell quick. Become an official member of the dock talk tribe. More importantly 100% of profits will go to the Hillsborough education foundation. pic.twitter.com/eAIIRb1PfU

Killorn is spreading the word far and wide. In fact, he just sent some shirts to Leafs winger Mitch Marner in Toronto. The pair played together on Team Canada at the 2017 World Championship.

The Leafs and Lightning, meanwhile, may be first-round foes in the playoffs should the season resume.

"It would be great, honestly," Killorn said. "I think that's a team we're pretty comparable to skill-wise ... offensively maybe two of the best skilled teams. It'd be exciting for the fans to watch, for sure."

With each passing day, Killorn is feeling more and more positive about the potential for the season to resume.

"I'm pretty optimistic," he said. "Being on a lot of these [NHL Players' Association] calls, it seems like both sides want to get going and it seems like this virus is trending the right way, so things may be able to happen. It's very speculative at this point, but I'm definitely optimistic about playing at some point – maybe in July, or who knows when?"

Until that time, Killorn will keep jet skiing, interviewing and raising money for a worthy cause.

"It's progressed into something a lot different than how it initially started out," he said. "I have to think up a couple questions in case the fan questions on Instagram aren't the greatest. I need to get gifts for my guests. It's become a full-time job. I feel like you right now."