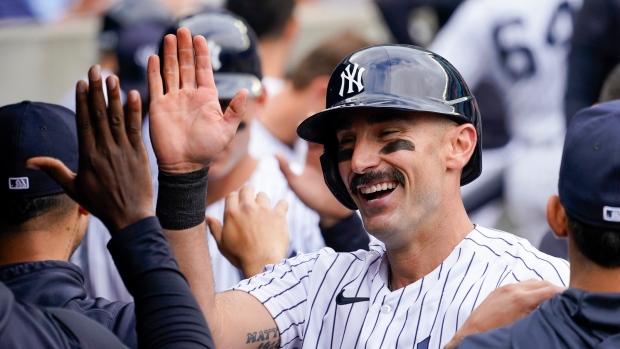 NEW YORK (AP) — The Yankees found a stash hidden in Round Rock.

Less than a month after he was languishing in the minors, Matt Carpenter showed why his bat has become popular with New York teammates — along with that bushy mustache.

Carpenter homered twice and tied his career high with seven RBIs, powering an 18-4 rout of the Chicago Cubs on Sunday that completed a weekend sweep and gave the major league-leading Yankees their their 11th win in 12 games.

“It's pretty hard to be in Triple-A and imagine that you'll get this opportunity,” the 36-year-old said.

Carpenter drew a tying bases-loaded walk as New York chased Keegan Thompson (6-2) in a five-run first and hit a three-run homer off Daniel Norris for an 8-1 lead in the second.

Carpenter added a two-run drive against Alec Mills in the sixth for his first multihomer game in four years and an RBI double in the seventh against Sean Newcomb as the Yankees sent Chicago to its sixth straight loss.

All the more impressive given Carpenter had gotten just two plate appearances since June 3.

“I put him in the garage for a week and pulled him out for a spin,” Yankees manager Aaron Boone said. “That’s impressive.”

Kyle Higashioka added his first two home runs this season, after hitting seven in spring training. Giancarlo Stanton and Isiah Kiner-Falefa had three RBIs each as the Yankees sprayed a season-high 17 hits and scored their most runs since beating Toronto 20-6 on Sept. 15, 2020.

Higashioka and Carpenter were late additions to the lineup because second baseman Gleyber Torres felt nausea and catcher Jose Trevino had back pain.

Carpenter raised his average to .333 with 13 RBIs. Signed on May 26 because of injuries to Giancarlo Stanton and Josh Donaldson, Carpenter became the first Yankees player to hit six home runs in his first 10 games and just the second major leaguer to have six homers among his first seven hits after Colorado’s Trevor Story in 2016.

“I was confident with what I was doing at the plate, was hopeful that this would potentially happen, and now it's been a lot of fun to see it play it out," Carpenter said.

A three-time All-Star with St. Louis, Carpenter had just three homers and 21 RBIs last season. He exercised an opt out at Texas' Round Rock affiliate on May 19 and returned to his home.

“I went from Triple-A to my couch for a week, didn’t know if this would work out,” he said.

Signing with the Yankees could not have worked out better. He matched his seven RBIs against the Cubs in July 2018, when he had his only three-homer game during a stretch of six straight games with long balls.

Carpenter played flawlessly at third base with two assists in his first big league game in the field this year.

“I’ve been waiting for that first Roll Call,” he said of the Bleacher Creatures.

Having shaved his longtime beard to comply with Yankees rules, Carpenter joined mustachioed pitcher Nelson Cortes to inspire Marwin Gonzalez and Lucas Luetge to give fuzzy upper lips a try.

“Super professional. Acts like he's been on the team forever,” said Jameson Taillon (7-1) who remaining unbeaten in 11 starts, giving up three runs and seven hits in five innings.

Manny Bañuelos pitched three innings for his first big league save. New York is 44-16 opening an 8 1/2-game AL East lead and has won 11 straight home games, one shy of its most since new Yankee Stadium opened in 2009.

“Them having the faith to sign me it means a lot," Carpenter said, “and I'm enjoying it.”

Higashioka was given the silent treatment after his third-inning drive, then homered in the eighth on a 35 mph eephus pitch from Frank Schwindel, a first baseman making his second mound appearance in 10 days.

Chicago’s six-game skid is its longest this year, dropping the Cubs a season-worst 13 games under .500 at 23-36. The Yankees outscored Chicago 28-5 in the three-game series and improved to 15-4 against the Cubs, 23-4 including World Series sweeps in 1932 and ’38. The Cubs are 0-12 in the Bronx. ... Thompson allowed five runs — three earned — three hits and three walks while getting two outs. His ERA has risen from 1.99 to 3.67 in his last two starts. Thompson and Norris walked six in the first two innings, and all scored.

“When you play one of the best teams in baseball, you realize we’ve got some areas that need to improve," Cubs manager David Ross said.

Cubs RHP Michael Rucker was optioned to Triple-A Iowa and Newcomb, out since May 7, was activated from the 15-day IL.

Cubs: OF Seiya Suzuki, sidelined since May 26 with a sprained left ring finger, still has swelling and won’t participate in baseball activities for at least five days. He called it a middle ground after speaking with Ross and president of baseball operations Jed Hoyer.

Yankees: Trevino’s back started to bother him Saturday. ... RHP Jonathan Loaisiga, out since May 22 with right shoulder infammation, is to start a throwing program Monday ... LHP Aroldis Chapman (left Achilles tendinitis) is to throw on flat ground Tuesday.