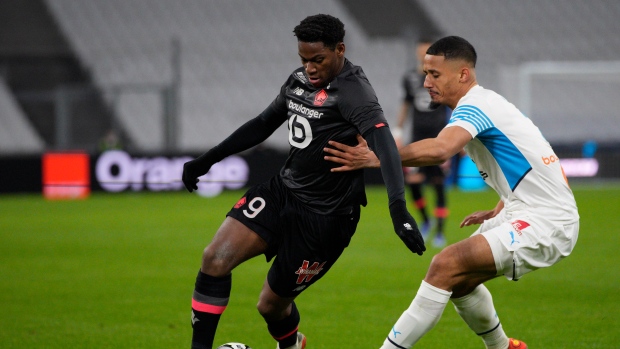 The list of top European clubs looking to secure Jonathan David’s signature continues to grow, with the biggest clubs in England and Spain lining up to persuade the 21-year-old Canadian striker.

Amid reported interest from Arsenal, Liverpool, Manchester United, and Real Madrid, TSN has learned Barcelona, Chelsea, and Tottenham have all made inquiries into the Ottawa native’s immediate future.

David is currently in the second year of a five-year deal with Lille. TSN reported last week that David is not looking to move away from the defending French champions during this January transfer window.

But it’s increasingly likely David will make a big-money move this coming summer. Many of the world's biggest soccer clubs have long been reported to be monitoring David's development, from his time in Ottawa minor soccer to his first professional contract with Belgium club Genk.

But the growing list of teams interested in signing David marks a clear progression of intent. TSN has also learned David hasn’t narrowed his list of preferred destinations and is “open” to every possibility.

Mavromaras also told TSN he and his client continue to discuss a list of questions to ask potential suitors.

“The questions that we ask clubs are simple: What’s the project [club ambition]?" Mavromaras said.

"There are a lot of questions that we go through when we meet with a club, and the one that checks the most boxes will be the one that will be [David's] next destination.”

David is currently tied for first in Ligue 1 scoring with 12 goals.