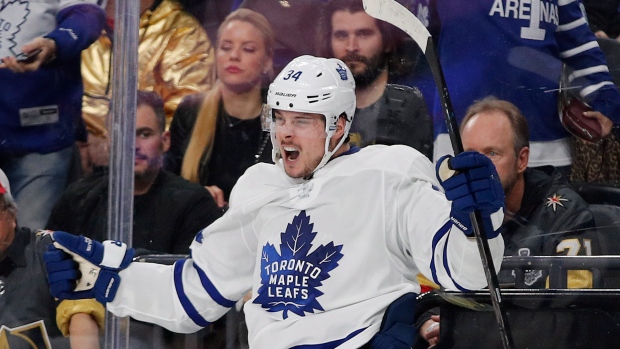 TORONTO – In the two months since Jake Muzzin was traded to the Maple Leafs from the Los Angeles Kings, he’s seen a lot of Auston Matthews’ game up close. However, nothing to date has compared to what the veteran defenceman witnessed from Matthews in Toronto’s 4-2 win over Buffalo on Wednesday, a two-point outing so strong on Matthews’ part that Muzzin had a hard time articulating his awe.

“I’m still learning from only being here a little bit, I don’t know what it was; the puck was just not leaving his stick,” Muzzin said after the Leafs’ optional morning skate on Saturday, prior to facing the New York Rangers that night. “His hands were feeling it that night, and then when the puck is glued to his stick like that, it’s tough to get it off him and he creates a lot of chances. That was pretty impressive.”

Impressive has increasingly become Matthews’ default setting, and Toronto is depending on that to continue. It was only a week ago the Leafs were in shambles, having allowed 23 goals in four games with a 1-3-0 record, all while looking a long way from any kind of playoff contender.

To correct themselves out of that free fall, the Leafs have made a collective pact to take more pride in their defensive game, evidenced by their sound play (but lack of goal support) in a 3-0 loss to Nashville on Tuesday. Galvanized by their improvements, Matthews responded with his most dominant performance in weeks.

In Wednesday’s win, Matthews’ line with Andreas Johnsson and William Nylander registered 66 per cent possession, and the centre tallied one goal and one assist with eight high-danger scoring chances and seven shots on net.

It was vintage Matthews, and the 21-year-old admitted he’s made a concerted effort recently to dial his game up even further ahead of the playoffs starting in a couple weeks.

“I think physically I feel pretty good and our line has been clicking pretty well,” Matthews said. “You just want to continue that and get better and better, so these last couple games for our line and individually have been pretty good. We’ve controlled the play, we’ve had the puck, we’ve been working extremely hard to get it back when we don’t have it and I think that’s a key for us, to just stay on it.”

That type of consistency has eluded many Leafs in this season’s second half, but arguably no one’s struggled harder for it than Nylander.

The contract stalemate that took two months of his campaign left Nylander desperately playing catch-up, and it was only when head coach Mike Babcock tried him on Matthews’ flank for the third time in mid-March that the winger could finally keep up with his long-time linemate.

Since they reunited, Nylander’s tallied six assists in six games, and Matthews has declared their chemistry to be back where it was from 2016-18.

“His edge work is extremely good, his head is always up and he sees the play extremely well,” Matthews explained of Nylander. “When he’s going through the neutral zone, he’s almost thinking a step or two ahead of the guy chasing him down or trying to take away his angle.”

While Matthews has been thriving this week, Nylander hit a speed bump health-wise and has been playing through an energy-sapping illness. He sat out Friday’s practice in an effort to recuperate, and said he’s feeling “much better” ahead of Saturday’s tilt against a Rangers team that’s 1-6-5 in their last 12 games.

It’s an ideal matchup for Nylander to bring his game back up to the level of his linemates.

“Matty and Johnny had two of their better games of the year [this week],” Babcock said. “I thought Matty’s skated real well here this last while, real physical on offence, got the puck back a ton and so did Johnny, so that’s huge. Willy’s feeling way better about himself, skating better, winning more battles. We need him to still find another level here confidence-wise, before the playoffs.”

While Johnsson doesn’t always draw the same attention as his linemates, he’s keeping pace points-wise, scoring one goal and adding four assists in his last six games. The 24-year-old stands at just 5-foot-10 and 181 pounds, but Johnsson plays with a fearlessness and physicality that complements Matthews’ and Nylander’s finesse.

“He’s ultra-competitive,” said Babcock. “We need more like him. Any time you get a player like that… you’d like two or three of them, but there’s no tree.”

“He gets to those dirty areas, scores a lot of goals right in front of the net and wins pucks back on the forecheck,” Nylander added. “He does a bit more of the dirty work on the line, so he helps us a lot.”

Now all Matthews’ unit has to do is stay hot. The more distance Toronto can put between itself and that disastrous stretch of a week ago, the better, and no one is showing more determination to do exactly that than Matthews and company.

“When I was on the ice watching the line go, I knew they were going to have a good night [in Buffalo],” said Muzzin. “You could tell they were buzzing. Puck was following them around the ice, creating chances. It’s fun to be a part of and hopefully their chemistry and the work continues and they can carry it into playoffs.”