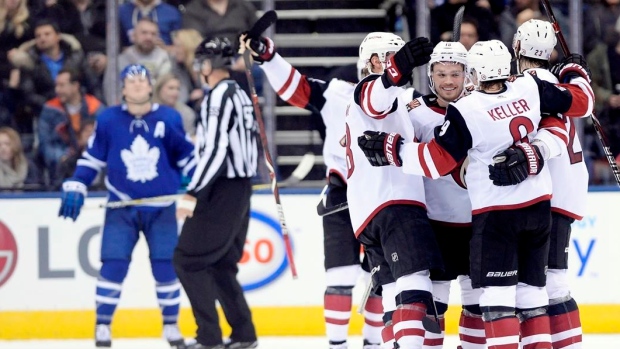 TORONTO – Mike Babcock had a feeling about Monday night’s game against the Arizona Coyotes. His Maple Leafs were riding a six-game win streak into a matchup with the worst team in the NHL, a situation the term “trap game” was invented for.

Babcock didn’t mention that phrase to his players. Instead he tried to underscore how well the Coyotes had played on their own two-game win streak and how their 4-15-3 record was not reflective of the team the Leafs would see on Monday. The tactic didn’t work – Toronto started slowly and never quite recovered, falling 4-1.

“New Jersey came in here [early this season] and we talked about how [that was] a trap game. So I made sure I didn’t talk about that this time because I tried that and that didn’t work,” Babcock said of that 6-3 defeat. “My approach this time didn’t work either. We weren’t prepared. We deserved it, that’s it.”

While they trailed the Coyotes 2-1 with just under four minutes left in the third period, the Leafs believed they had tied things up when Auston Matthews flipped a puck top shelf over Antti Raanta. But the goal was ultimately overturned on account of goalie interference – Zach Hyman’s stick had pushed Raanta back into his net, but at first glance it appeared the netminder had sufficient time to recover before Matthews’ shot.

Hyman didn’t think he prevented Raanta from making the stop. Babcock didn’t agree with the call either, but also doesn’t believe it’s the reason Toronto lost.

The Leafs had little energy to speak of out of the gate, and were outshot by the swarming Coyotes 10-1 through the first half of the opening frame. Monday marked just the seventh time this season the Leafs have ceded the first goal of the game. Toronto did eventually find its legs, but not with the consistency they needed to keep up with the speedy Coyotes. The Leafs lost the turnover battle (they were credited with 17 giveaways to Arizona’s 12) and the special teams battle, which ultimately decided the final score.

The first three goals of the game were all scored on the power play, with Arizona holding a 2-1 advantage after 40 minutes. The Leafs hadn’t been firing on the man advantage for weeks, going 4-for-31 over their previous 12 games with the extra man dating back to Oct. 26. Going a pristine 1-for-1 against the Coyotes courtesy of James van Riemsdyk’s 11th goal of the season didn’t outweigh the Leafs’ sloppy penalties and subpar penalty killing. The kill had gone 8-for-8 in Toronto’s previous three games, but were just 2-for-4 on Monday.

“The PK has to be better,” said Hyman, who took one penalty and played 1:33 shorthanded. “They move the puck around well, their D gets the puck through pretty well, they have some elite defencemen. They had a good game.”

“On the penalty kill we weren’t good enough today and they made us pay,” added Frederik Andersen. “They play fast. Their top six forwards are fast and skilled. If you don’t compete with them they’re going to have some chances.”

While the Coyotes drew strong performances from their young stars - rookie Clayton Keller recorded two assists - Babcock didn't feel his young players were nearly as impactful as they need to be. Matthews, Mitch Marner and William Nylander combined for just one assist and two shots on goal in the loss and weren't generating to the usual level they're capable of. In an 82-game season, games like Monday's are bound to happen, but they're not something Toronto can afford on a regular basis.

"It was the only game we were playing today,” said Babcock. “Get ready for the game you’re playing today. That’s what a good pro does, that’s what you do each and every day. We got the game [going eventually], but when you don’t start on time and you’re not prepared to go right, you don’t deserve good results. We got what we deserved.”​

Matthews didn’t hide the fact he hasn’t felt at his best since returning on Saturday from an upper-body injury that sidelined him for four games earlier this month. On Monday it was clear the 20-year-old is still rounding back into form and trying to recapture the explosiveness that makes him one of the most dangerous offensive players in the league. Matthews admitted as much post-game, saying “I wasn’t very good tonight” and critiqued his overall performance. Skating in his 100th career game, Matthews is known to usually have the puck on a string but was getting stripped or turning it over with uncharacteristic frequency against Arizona. Double teams have become the  norm for Matthews since last season but he’s not battling through them yet with the same authority he did before the injury. The centre did have two shots on goal Monday, one of which rang off the post (and he had that goal overturned) but the details of Matthews' two-way game look a long way from where they were two weeks ago. Matthews finished the night at minus-two.

While the Leafs had been enjoying their six-game run of victories, Andersen had a streak of his own going. The goaltender had put together consecutive shutouts going into Monday night, turning aside 75 shots in the process. That streak came to a halt early against the Coyotes, when Brendan Perlini potted a power play marker less than 10 minutes into the game. By that point, Andersen had gone 1:40:01 without allowing a goal, dating back to Nov. 10 against the Boston Bruins. The Leafs’ netminder has been their best player over the last two weeks and was strong once again against Arizona. He weathered much of the early siege and made a couple of great stops from in close to hold the Coyotes at bay. But while Arizona did a good job thwarting Toronto by getting in shooting lanes and taking away secondary scoring chances, the Leafs didn’t do as good a job in front of Andersen. He finished with 27 saves, the first time in four games he hasn’t turned aside at least 30 shots.

In his pre-game press conference, Babcock bristled at a reporter’s question about why he isn’t more willing to try line combinations created in-game on a long-term basis when they seem to spark some offence (he has since apologized for his “disrespectful” response). Babcock started Monday’s game with his usual lines, but by the third period was once again sending out new trios. Matthews was back with Mitch Marner on his right wing, Nazem Kadri was centering Patrick Marleau and William Nylander, Connor Brown joined Tyler Bozak and van Riemsdyk and Leo Komarov slotted onto the fourth line. It didn’t have the desired result of helping Toronto complete the comeback, but the top two lines especially had extra jump once they were jumbled. Whether that was the late-game situation they were in or the result of burgeoning chemistry, no one may ever know if Babcock sticks with his original lines going forward. But with the frequency he’s shaking them up in-game, an overhaul wouldn’t be totally unexpected.

The Leafs didn’t win the ultimate battle on the scoreboard, but they were absolutely dominant possession-wise against the Coyotes. Toronto finished with 60 per cent possession, peaking at 68 per cent in the second period. Kadri, Marleau and Komarov led the way at 77 per cent or better on the night, and only the regular fourth line (Matt Martin, Dominic Moore and Connor Brown) and third defence pairing (Connor Carrick and Andreas Borgman) were at less than 50 per cent possession. Despite the numbers Toronto was still outshot by the Coyotes 31-28, underscoring even more the importance of special teams and indicating the Leafs weren't putting themselves in quality scoring areas to capitalize on the chances they did generate.

The Leafs hit the road again to take on the Florida Panthers on Wednesday.