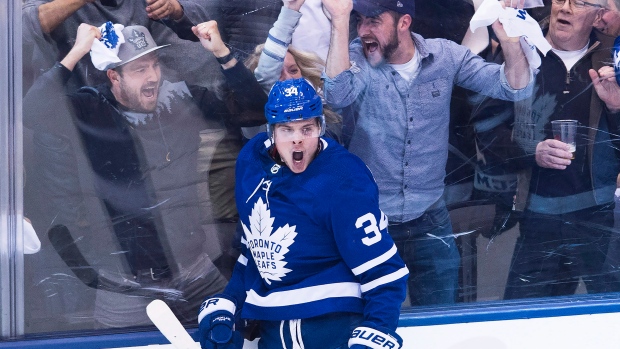 NEW YORK — Toronto Maple Leafs centre Auston Matthews has the top-selling jersey in the NHL, according to the league's website.

NHL.com reported Friday that Matthews' No. 34 jersey was the hottest seller on the Fanatics network of e-commerce sites, including Shop.NHL.com, NHLShop.ca and Fanatics.com, for the 2017-18 regular season.

"Obviously that’s pretty cool," Matthews said Friday. "We have unbelievable fans here and every time we play it’s awesome seeing your jersey in the stands. It's definitely something you don’t take for granted."

Matthews, who had 63 points (34 goals, 29 assists) in 62 games his second season in the NHL, beat out Pittsburgh Penguins captain Sidney Crosby, who had the top-selling jersey last season, and Edmonton Oilers centre Connor McDavid, the league's scoring champion for two straight seasons.

Those jerseys may have to be mothballed soon, as the Leafs trail Boston 3-1 in their best-of-seven Eastern Conference quarterfinal following a 3-1 loss at home Thursday night.

There are some surprises on the list. Washington superstar Alex Ovechkin came in at a middling sixth, while Rangers forward Mats Zuccarello, who had a modest 53 points on a terrible Rangers team, was seventh.