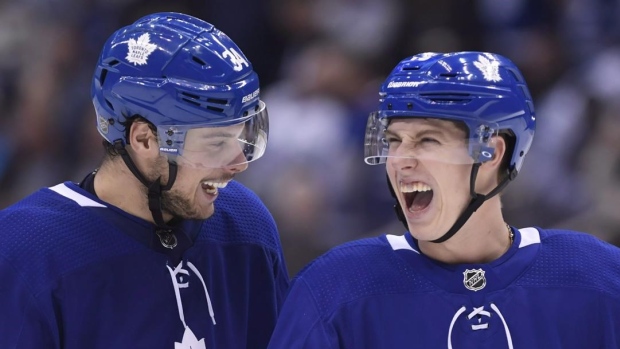 Will Auston Matthews and Mitch Marner see shifts together against the Blue Jackets?

That's music to the ears of Marner.

"Hopefully, we do play together more often," the right winger had said minutes earlier. "I mean, it's not our say so I guess we’ll leave it up to Babs, but I thought when we have played together, we've played responsible, we've played well together, we've created opportunities on the offensive side."

But Babcock isn't sold. He prefers creating a more balanced line-up with Marner and Matthews only spending 231 minutes of five-on-five time together in their first three seasons, usually when the team is struggling and in need of a shakeup.

"They got a point together in overtime," Babcock observed of the Matthews-Marner chemistry last night. "You know, we haven't played them a ton together, when it has (happened), it hasn't been like I said to myself, 'Gee, this has got to be perfect.'"

The numbers seem to back up Babcock as the Leafs lost the possession battle (47.2% CorsiFor) and were outscored 10-7 in the minutes Marner and Matthews played together in their first three seasons, per NaturalStatTrick. But, you have to think, given more time together, the chemistry could be special between the lethal shooter and dynamic playmaker.

"When we've been together it just kind of clicks right away," Matthews said, "but obviously you get more and more reps with one particular person I think that just grows more."

Last night, Matthews and Marner saw a lot of shifts against Boston's top line losing the possession battle, holding their own against Brad Marchand, Patrice Bergeron and David Pastrnak on the scoreboard. The Matthews line generated Toronto's first goal with Pastrnak tying it late.

With John Tavares out for at least five more games, Babcock appears willing to let Matthews and Marner prove they deserve an extended audition together.

"We haven't tried to do that, because we've always had two centres that we could spread our people around," Babcock said. "Right now, it's a little bit different so we’re going to do whatever helps us win tomorrow."

Marner is determined to take advantage of the opportunity.

"When we get to play with each other, we know it’s not often," he said, "so we want to go out there and do the best we can and create opportunities and shut down offences and try to stay together longer and play more games with each other."

Against the Bruins, Babcock used Marner and Matthews against the Bergeron line for neutral-zone starts or on-the-fly shifts while leaning on his fourth line for defensive-zone starts against Boston's big boys. When the Leafs started in the offensive zone, he looked to get Matthews out with his usual right winger William Nylander.

Marner finished with two assists on Saturday night and the Leafs outshot the Bruins 10-6 when he was on the ice at even strength. Marner, who signed a new contract one day into training camp, was all over the ice providing a spark that had been missing early in the season.

"I thought last night was his best game," Babcock said. "I thought he had the most jump. He was there for all of camp, but he wasn't there for the two weeks before, I just think ... it takes you a bit to get going. He looks to me like he's going and starting to make more plays and be better without it and have more energy so that's a positive thing for our group."

Marner had been a minus player in six of the first eight games and only produced three even-strength points in that stretch. ​

"It hasn't been the start that I wanted defensively," he admitted. "I thought last game we did a good job against that line."​

Before practice started, Babcock skated over to Matthews and the pair had a chat. Perhaps it was about ice time. Matthews played a season high 23 minutes and 12 seconds against the Bruins averaging 49 seconds per shift, which is right on his season average. During last spring's playoffs, Babcock said the optimum shift length was 42-43 seconds.

Matthews didn't have as good a night as Marner against the Bruins, finishing with 41% CorsiFor and firing just one shot on net. But he was fired up afterwards declaring it could be a "statement" win for the group.

Does Matthews believe it could be a turning point of sorts?

"I hope so," he said on Sunday. "A little bit of inconsistent (so far), especially on the back-end of back-to-backs, I think that's something we'd like to clean up, but you play one of the top teams in the league and you come out with two points, I think you just want to keep that train rolling.”

Marner and Matthews have always had good chemistry off the ice. And the good friends actually run a fantasy football team together in the Leafs player league. They joined forces last year when there was only one slot left and they both wanted in. This year, they stayed together.

"But now he's got like seven teams," Matthews said in mock disgust, "so it's all on me."

"I wasn't huge into it (last year) and this year I'm in four, five leagues," Marner explained, "and it's way too much to handle. But I'm getting more dialled in on the football and it's nice on Sundays just sitt​ing at home with my dog and watching TV."

"We got off to a good start," said Matthews, "and then lost like three in a row so I'm trying to get some trades going and move some guys around and (be) GM of the year."

But Marner isn't happy with what Trader Auston has come up with. A recent deal saw Aaron Rodgers and Le'Veon Bell sent to the team run by Alexander Kerfoot with Lamar Jackson the key piece coming back.

Travis Dermott has practised the last week in a regular sweater. How's he feeling?

"Great," said the defenceman. "It's coming down to the time when I'll get the green light soon."

Dermott, who had shoulder surgery on May 10, is eligible to come off the injured reserve for Saturday's game in Montreal. Any chance he plays against the Canadiens?

"I'm not sure," the 22-year-old said. "I think it comes down to these guys (medical staff) ... it's tough dealing with this, feeling as good as I am, so I trust these guys. When they give me the green light I'll be more than ready to go."

The Leafs were frustrated to only draw one power play against the Capitals on Wednesday night so imagine how they felt on Saturday when they didn't get even one man-advantage opportunity against the Bruins.

Is Babcock looking forward to the tide turning in that department?

"I can't wait for our next power play," he said. "Can't wait. Yeah, yeah, hopefully we can get one or maybe two."

Whenever the Leafs get on the power play next, Nylander will debut in the bumper spot on the top unit.

"It's been a game and a half now without a power play," said Marner, "so when we get out there we got to make sure we're good and bring a good energy, good pace. We'll be getting used to Willy in the middle."

US Open champion Bianca Andreescu dropped the puck during the ceremonial face-off on Saturday night. Babcock calls the WTA star's season "unbelievable." He sent a congratulatory text to the 19-year-old through her team after the win in Toronto.

"I am a pretty good pickleball player," Babcock said with a smile. "I like to get at it pretty good, but I know zero about tennis. What I do know (is) competition and competing and what I like about her is she just seems to love it. When it's on the line she just seems to bring it."

Babcock was impressed with how Andreescu overcame a shoulder injury to win the Indian Wells title and make the fourth round of the Miami Open.

"I love that stuff so she has good grit. I thought it was great last night and the town seemed to love her and why wouldn’t you?”

"I always expect the guys to play," the coach said with a grin.

Morgan Rielly also missed practice, but will play against the Blue Jackets.

Tavares, who's working his way back from a broken finger, hit the ice after the main session to work with skating consultant Barb Underhill and assistant director of player development Hayley Wickenheiser.