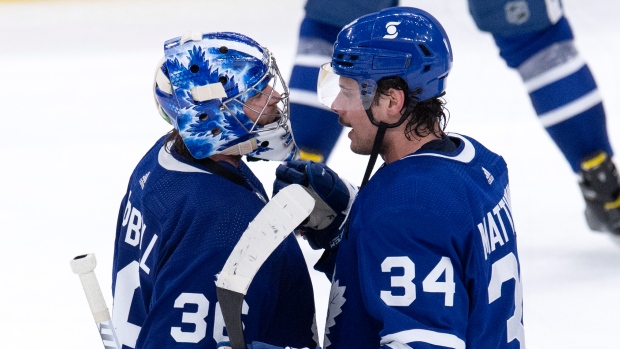 TORONTO — Auston Matthews has seen shots clank off the post and others seemingly destined for the back of the net plucked out of mid-air time and again in recent weeks.

So, the NHL's leading goal scorer can be excused for feeling he was owed a bounce.

Matthews scored on a double deflection 54 seconds into overtime Saturday as the Maple Leafs roared back from a 3-1 deficit with under eight minutes to go in the third period to defeat the Edmonton Oilers 4-3.

The star centre took a pass from Morgan Rielly in the extra period and fired a shot that hit the stick of Edmonton's Leon Draisaitl before bouncing in off defenceman Darnell Nurse's skate for his 22nd goal of the season.

Matthews, who had scored just three times on 46 shots in his last 12 games coming into the showdown of North Division heavyweights, hit his league-high eighth post in the second period and had six other attempts denied by Oilers netminder Mike Smith before finally connecting.

"Not really how I drew it up or ever envisioned it, but I'll take that."

William Nylander, with a goal and an assist, John Tavares and Pierre Engvall also scored for Toronto (22-10-2), which extended its winning streak to three games. Jack Campbell made 17 saves, while Alex Galchenyuk added two assists in another strong performance as the Leafs improved to 6-1-1 against the Oilers this season.

"Resiliency," Matthews said of what stood out about his group. "We just stuck with it."

Draisaitl had a goal and two assists for Edmonton (21-13-1), while Tyson Barrie, with a goal and an assist against his former team, and Nurse also scored for the Oilers. Mike Smith made 27 saves. Connor McDavid, who tops the NHL scoring race with 62 points, including 21 goals, added two assists.

The Leafs and Oilers will play their ninth and final meeting of the regular season Monday back at Scotiabank Arena.

Edmonton saw live action for the first time in a week after their three-game series in Montreal was postponed when two members of the Canadiens were added to the NHL's COVID-19 protocol list Monday.

"Our energy was all right," Oilers head coach Dave Tippett said. "Our execution was poor."

Toronto swept Edmonton three straight in a series that saw the Leafs boss proceedings by a combined 13-1 scoreline and hold McDavid without a point the last times the teams met.

The Oilers have rebounded nicely since that troubling stretch, going 7-2-1 to close the gap in the division thanks in large part to McDavid's seven goals and 15 assists over that span. Toronto, meanwhile, improved to 4-6-0 since that series at Rogers Place.

Down 3-1 in the third, Tavares got the home side within one with 7:39 left in regulation when he took a between-the-legs feed from Galchenyuk, who returned to Toronto's second line after starting the game on the fourth unit, and snapped his 10th past Smith.

"It's a big part of my game," Tavares said of contributing offensively. "This year it hasn't been as consistent as I'd like.

"Nice to get it and help the team get back in it."

Nylander then fired home his 13th with 3:22 remaining off another feed from Galchenyuk to tie it before Matthews made the decisive play in OT.

"I'm feeling better and better," said Galchenyuk, the No. 3 pick in the 2012 draft now with his seventh organization since 2018. "The more you play, the more comfortable you get.

Toronto grabbed a 1-0 lead at 4:14 of the second on a strange sequence. Engvall scooped a shot towards the Edmonton net in tight, tried to swipe at it with his glove and saw the puck bounce off Smith's helmet and in for his third of the campaign.

The play was initially ruled a goal, then waived off after the officials judged Engvall touched the puck with his hand before the call was finally reversed a final time following a video review.

Edmonton got that one back at 6:47 when Nurse joined the rush, took a pass from McDavid and beat Campbell through the five-hole for the defenceman's career-high 11th goal.

"I'm not going to sugarcoat it," said Campbell, who improved to 6-0-0 this season. "I just didn't have it tonight. That's what a really great team does — they pick guys up.

"They picked me up tonight."

Matthews then hit that league-leading eighth post on a wicked shot that beat Smith clean.

The Oilers took their first lead with 5:55 left in the period when McDavid raced down the left side against Leafs defenceman Justin Holl before finding a late-arriving Draisaitl to bury his 19th.

Barrie, who had a one forgettable season with Toronto in 2019-20 prior to signing with Edmonton in free agency, made it 3-1 with 1:54 remaining in the period when he took a no-look feed from Draisaitl in front and roofed his fifth on Campbell, who made a third straight start with Frederik Andersen still dealing with a lower-body injury.

"We stopped playing," Leafs head coach Sheldon Keefe of his team's second period. "We got the goal and we just lost our legs from there. We stopped skating, we fought the puck, didn't get through the neutral zone very well.

"We had, at 5 on 5, nearly nothing happening around the net."

A Toronto power play on an ugly 1-for-21 run got a chance early in the third, but Smith robbed Matthews on a one-timer and Tavares hit his second post before the late fireworks.

"The second period, we definitely didn't play our best hockey," Matthews said. "But in the third period we just clawed our way back."

"Not really how we drew it up in overtime, but a fortunate bounce and we'll take that any day of the week."

This report by The Canadian Press was first published March 27, 2021.