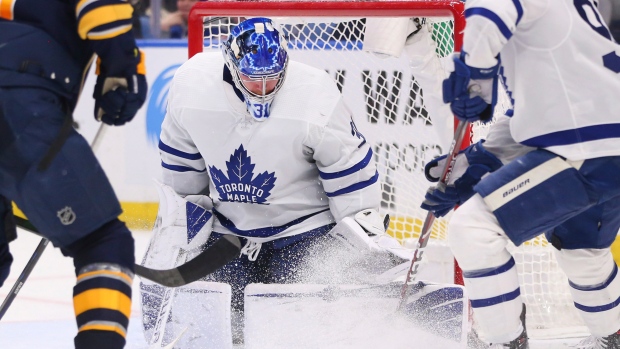 Leafs goalie Frederik Andersen makes a save against Buffalo. , The Canadian Press

TSN Toronto reporter Mark Masters checks in daily with news and notes on the Maple Leafs. The Leafs and Penguins skated at PPG Paints Arena on Tuesday.

"This is the worst we've been in a really long time," the Maple Leafs coach told reporters. "We haven't really put our game together for quite some time, but this was different today where for most of the game it didn't feel like we were in the building at all."

So, what was missing?

"It was mostly, probably, a mindset, an attitude," said centre Auston Matthews. "I mean, can't feel sorry for ourselves, we obviously weren't ready to play. The first 10 minutes, actually, weren't bad and then it went a bit sideways on us and we didn't really compete. They were winning all the battles."​

The excuses were there: injuries piling up and playing on consecutive nights against a rested opponent. And yet the Leafs were still tied with the Sabres in the third despite their sloppiness. Then Toronto lost focus again allowing three goals in 91 seconds.

"We had a good start to the third and tied it up and then just kind of unravelled," said defenceman Tyson Barrie. "We just have to find a way to wrap our head around the fact there's 22 games left and every game we have to fight for and whether it's a back-to-back or whatever it is there's no excuses."

Jake Muzzin and Rasmus Sandin missed time with bumps and bruises in Buffalo before returning and some penalty calls went against the Leafs, but the belief is the talent on the roster should still be enough to overcome all that.

"Things get tough, we got to battle through adversity and that's what we're trying to figure out here," said defenceman Travis Dermott, "teams bring some momentum and we got to learn to stop that, calm down, take a step back and then kind of reset. That's what we're working on."

But time is running out. Toronto is third in the Atlantic Division with Florida two points back and holding a game in hand. The Panthers also own the first tiebreaker (regulation wins).

Why is it so hard to establish the proper mindset?

"It's a good question," Keefe admitted. "We haven't found the answer, clearly. We need to have a mindset that every game is an opportunity for us to be great and we have to establish the right frame of mind and just go out and be that and not think about anything else that is really irrelevant."

"I think just every night, bringing that consistency as a team," Matthews said of the ideal mindset, "as a group, from the leadership (out), making sure every single night we're bringing our 'A' game no matter what the situation is, who we're playing, what kind of environment we're in, where we are in the standings, just making sure we're coming out and competing, all 20, 22 guys."

After the loss in Buffalo, Keefe pointed out that Toronto's depth is being exposed both in the bottom six forward group and on defence where the absence of Morgan Rielly and Cody Ceci is being felt.

"​I think our top guys have been playing extremely well, but we haven't had the results that we'd like and I think a lot of that is we're not rolling as a cohesive group here right now and injuries play a part, but we have 12 forwards and six defencemen playing every night and we need to get everybody moving," Keefe said Tuesday morning.

The coach is making changes to try and create a spark. The bottom six had a new look at the morning skate with Frederik Gauthier between Pierre Engvall and Kasperi Kapanen and Jason Spezza between Kyle Clifford and Dmytro Timashov. T​he Leafs are getting almost no production from those players right now.

Kapanen hasn't scored in five-on-five play since Jan. 2 in Winnipeg, which was 17 games ago. Kerfoot has one goal in 19 games. Engvall's goal drought just hit 16 games. Clifford has one assist in six games since the trade. Gauthier and Timashov have struggled to produce all year and were scratched on Sunday in favour of two AHL call-ups (Mason Marchment and Egor Korshkov) who had played the two previous days.

At the end of the morning skate, Keefe called over Toronto's bottom-six forwards for a chat on the sideboards.

"I got to get them opportunities to play and put them in good spots," he said of his message. "We haven't got enough out of them and that's on me as a coach. I want our group to be thriving and we don't have a lot of guys thriving down there right now."

Keefe doesn't believe his top guys are wearing down despite playing big minutes, but also believes the stars can do more to insulate the rest of the lineup.

"Those guys have been playing really well, but we need them to help the cause of the entire team and part of that is shift length and line changes and putting them in a good spot as well so we need to just play better as a cohesive group."

The test against the Penguins is a tall one, especially on the road where Mike Sullivan has last change. Sidney Crosby (20:22 TOI/G) and Evgeni Malkin (19:44 TOI/G) will likely play upwards to 40 minutes tonight.

"You're looking for them to win shifts," Keefe said of his third and fourth lines. "They don't necessarily need to score or anything like that, that’s all bonus, but you need to be able to rely on them to win their shift and keep the puck in a good spot and not spend time in their own end. Also to take on the responsibility, at times, to be in mismatches. We're looking at a team in Pittsburgh that doesn't play their fourth line a whole lot so you're going see a lot of really good players. If we're going to try to get them going, then they’re going to be in some mismatches especially on the road."

Keefe is also shaking things up on the blueline. Rookie Timothy Liljegren will sit in favour of birthday boy Martin Marincin, who turns 28 today and returns to the lineup after being a healthy scratch in eight straight.

"With the matchups and the fact it's two very good lines and the fact we're on the road and even their third and fourth lines, when they're out there, will be competitive, physical and they're going to work, it’s going to be high-paced," Keefe observed, "and we thought Marincin might be a little better-suited to handle that at this stage than Liljegren."

Marincin will pair up with Dermott while Barrie slides down to play with teenager Rasmus Sandin in a sheltered role.

"Their skill-set pairs well together," Keefe said. "They'll play in a lot of offensive situations, offensive faceoffs and with some of our better players."

"He skates so well," said Barrie of Sandin, "sees the ice so well, he’s offensively gifted so we’ll try and bring a little more offence from the back end."

Barrie has just three assists in his last nine games.

If the matchup pair of Muzzin and Justin Holl faces Crosby's line then Dermott and Marincin project to play against Malkin. The Russian has been on fire this season with 58 points in 44 games. It was Malkin who ensured Pittsburgh stayed afloat even with Crosby out for 28 games.

"He's played awesome," said defenceman Kris Letang. "For some reason Geno elevates his game every time there's adversity. I felt he wanted to put the team on his shoulders and try to carry us. That's when he thrives the most."

"Just dominant," Crosby observed of his long-time teammate, "you know, consistent, with all the injuries we've had he's stepped up, and we've seen it time and time again, but just dominant in every aspect."

Malkin has certainly dominated the Leafs during his career. In 38 games, Malkin has 22 goals, 42 assists and 64 points against Toronto. That 1.68 points-per-game average is his highest against any team. Malkin has only been held off the scoresheet in six games against the Leafs.

The Penguins have actually lost more man games to injury than the Leafs this season (241-156) and yet here they are just one point back of the division-leading Capitals. How'd they manage everything?

"There's so many things," said Letang, "like the mindset in this dressing room starting with a leader like Sid, Geno, the way the young guys came in and filled the roles and take the opportunity to have more ice time. It's an addition of all those things. And, obviously, our goaltenders were really good, both of them."

Crosby is making up for lost time with 19 points in 12 games since returning from injury. And now he's got a new winger to work with in Jason Zucker, who has three points in three games since the trade from Minnesota. Zucker's speed has made an immediate impact.

"It just helps create turnovers," Crosby noted. "I think when a guy's got speed like that you can read off him and you know that he's going to be F1 a lot of times on the forecheck and get in there and I think it elevates everyone else's speed when you get to play with a guy like that. It tends to simplify things when you know a guy's going to be in straight lines like that."

Crosby appreciates how Jim Rutherford never fails to make a move to bolster the team down the stretch.

"Just his willingness to do anything he can to give us the best chance and opportunity to win," Crosby said when asked what stands out about his GM.

"I mean, as players I think that's all you can ask for."

Crosby and Zucker will likely see a lot of Toronto's top line featuring Matthews and Mitch Marner. How much will Crosby worry about that dynamic duo when they're on the ice?

"I'd say a lot," the Penguins captain quipped with a smile. "Between (Auston's) speed and the shot and Marner's playmaking ability, and Matthews doesn't need much time and space to get that shot away, so they create a lot and you've got to be able to play in their end, if not it's going to be a long night. As soon as they possess the puck they'll be able to generate chances."

Marner perked up when informed of Crosby's praise.

"It's really cool," Marner said. "I mean, it's hard not to say that. It's a guy I grew up watching, wanted to be like so to step on the ice against him is always a fun time, it's always a challenge. They got a lot of guys who have a lot of skill, but they also work very hard so brings it to a whole new level so that’s why they’re the best at what they do. You still see videos of his workouts, his on-ice stuff in the summer time and how hard he works. It’s very impressive."

While Crosby praised Rutherford, Marner insists he's not looking for a lifeline from Kyle Dubas.

"I'm not going to worry about Kyle's job, that's his job," Marner said. "For us players, it's just coming in every game and showing we're a team capable of going the distance and doing something magical here so we got to get back on that page. We were on a little bit of a heater before and recently we've been getting off our game and not playing as well as we should so it starts here tonight."