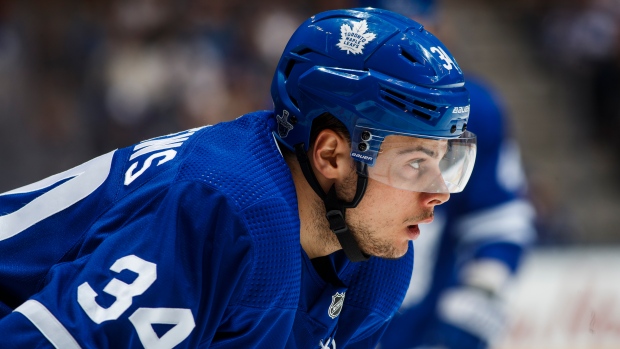 Toronto Maple Leafs centre Auston Matthews was seemingly pegged for the team’s captaincy through the first two seasons of his career.

Now, however, with John Tavares in the fold, the future of the ‘C’ in Toronto is unclear. While Matthews said he’d tell the team he can handle the role if asked, he doesn’t put much stock in the meaning of the letter.

“Yeah, I would tell them yeah. I’d tell them I’d feel ready,” Matthews told The Athletic. “I don’t know what they’re thinking about doing, what they want to do. Obviously John has been the captain in New York for a while. So I don’t know what they’re thinking or what their whole ideal situation is for that. But I don’t think it really changes much, whether you have a letter or not, for myself or anybody. I go lead by example, on the ice, off the ice, and being a good teammate is a big part of that, too.”

Matthews said becoming a captain has never been a priority of his. In fact, wearing the ‘C’ would be relatively unchartered territory for him.

“But obviously you come into a situation like this and it’s something that if it happens then you definitely embrace it and accept it, and if doesn’t you go about your business and your thing the same way.”

As for Tavares, Matthews said he spoke to the former New York Islanders star during the courting process and did his best to sell him on the city. The 20-year-old said any rumours of him being unhappy with Tavares’ decision were completely false and spoke on the moment he got the call from general manager Kyle Dubas.

“I was at home. Actually, I was sleeping and Dubas called me and kind of woke me up,” Matthews said of July 1. “I got up and I was trying to make it seem like I’d been up for like three hours. He just called me and told me we signed John and obviously I was ecstatic. I honestly couldn’t believe it. I didn’t know what was going on, what was going to happen. I knew they were happy about the presentation to him (during the interview period) and everything. Once they signed him and they said they were going to announce it in a couple hours I was ecstatic. I called my Dad.

“I think the whole city of Toronto pretty much erupted. Pretty special.”

Matthews said he hadn’t thought of how Tavares would impact the team’s lines, but that he was simply to have him in the fold.

“Not really. We wanted him — I wanted him,” Matthews said. “You got a guy like that, a top-10 player in the world, and you add him to this team that is already so dominant up front with our forward group. It just makes us that much better. I think everybody is ecstatic to have him.”

As for any rift with Babcock, Matthews said that was just another story blown out of proportion under the Toronto microscope.

“Yeah, there was nothing more than that,” Matthews explained of Babcock meeting with him in Arizona after the playoffs. “Obviously coaches, players, they’re not going to agree on everything and I think that was the case. And I think it’s just blowing up because it’s Toronto. I think it would’ve been a little better if it was kept hush-hush, but obviously it didn’t and it just blew (up) into another, I guess, pointless story that people looked too much into. But that’s all it was.

“It was just a discussion to make sure we’re all on the same page and we move forward.”

Matthews, who missed 20 games last season due to injury, topped the 30-goal mark in each of his first two seasons, while posting 29 assists both years. He told The Athletic he will continue to be a shoot-first forward, but believes he can find room to improve on the power play this season.

The Maple Leafs will open their season on October 3 against the Montreal Canadiens.