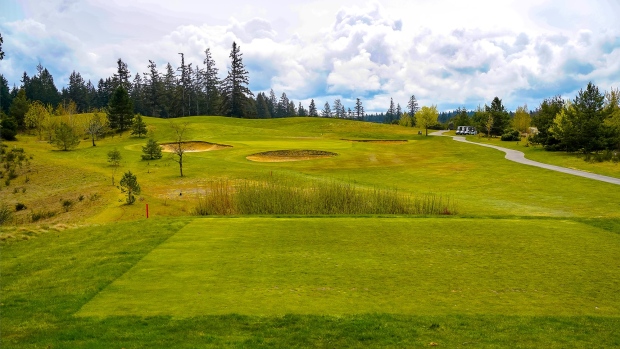 DUPONT, Washington—On a long day of golf, with more than half the field required to finish their first rounds and then turn around and play their second rounds, American Blake Maum took the 36-hole lead at the PGA TOUR Canada Qualifying Tournament at The Home Course. Maum finished his suspended first round Wednesday morning, turning in a 5-under 67 followed by a 69, and that was enough to give him a one-shot lead over Australia’s Cameron John. Christian Muscarello and Taylor Funk are tied for third, two back.

Maum played 25 holes total, his first round halted after 11 holes Tuesday when officials halted play due to darkness. When play resumed early Wednesday morning prior to the rain—again—starting to fall, Maum finished a clean, first-round back nine, with six pars and three birdies, then went out for his second round and made three front-nine birdies. His lone bogey came at No. 10, but he recovered nicely with a birdie at 11 then parred in for his 3-under 69.

“I plotted my way around and managed to get it in the hole and make birdies on the right hole,” Maum understated. “I think I came into it with a good gameplan. I knew the greens are bumpy with the rain we’ve been getting in here. It’s going to be tough to make putts, tough to score, so I’m almost playing more strategic than I normally would. I think I’m trying to play to the fatter side of the green and get good looks.”

John bogeyed his first hole of the second round, a disappointing result after piping his drive down the middle of the fairway. “I kept hitting quality shots, and I missed a few putts on the front nine,” the Australian said of his even-par showing. John got things going after making the turn, with birdies at Nos. 10, 13, 15 and 17 for his 68. “I just got a few to go my way,” he added.

Muscarello played one more hole than Maum on Wednesday and was happy with his day despite a bogey at the par-4 18th to finish. ““I was trying to put the ball in position and miss in the right spots. I think the golf course fits my game pretty well. I was able to drive it pretty well and hit a lot of greens. There was not too much stress,” he noted.