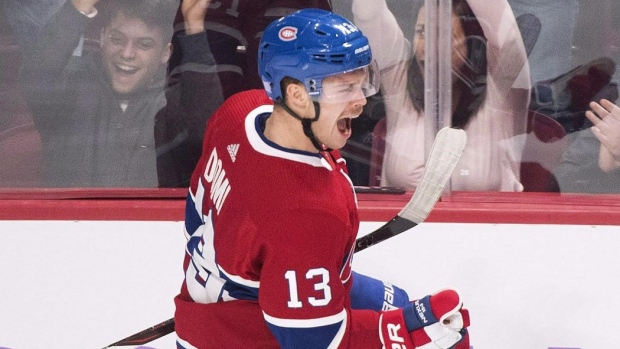 For Montreal Canadiens forward Max Domi, it was a big move going from the Arizona Coyotes to the Habs but it’s one he has enjoyed.

“It was awesome. I absolutely loved it,” Domi told TSN.ca on his first season in Montreal. “You know what, I think we came up a little bit short and our goal was to make the playoffs and ultimately win the Stanley Cup, we weren’t able to do that so it’s something to build on. I did think we took some positive steps forward.”

“I think just a little bit more from everyone, said Domi. “I think we missed the playoffs by two points or so. We all find a way just to get a little bit better and take our game to next level, we should be fine.”

Domi was acquired by the Habs last summer in a one-for-one deal in exchange for fellow forward Alex Galchenyuk. He rewarded them with a breakout season offensively, pacing the team with a career-high 72 points, the highest total to lead the Habs since Alexei Kovalev registered 84 points in 2007-08. He also smashed his previous career-highs in goals (28) and assists (44).

Last season also saw Domi shift to centre ice for a full season for the first time in years. “I was asked to play centre and I loved it,” Domi said. “I touched the puck a lot more so I think it gives you the ability to create more offence, more responsibility with faceoffs and playing in your own end and playing against high end lines and being able to play defensive as well so it was an adjustment but again it was my first year playing centre since I was like 14 or 15 years old so I’m looking forward to building on that as well.

“If I’m asked to play left D I’ll be ready for that. Any position I’ll be prepared to play.”

The Habs had some familiar faces depart this summer. Forwards Andrew Shaw and Nicolas Deslauriers were dealt to the Chicago Blackhawks and Anaheim Ducks respectively while defenceman Jordie Benn signed with the Vancouver Canucks.

“It’s tough,” Domi said on seeing teammates leave. “I mean those three guys are not only great on the ice for us, but great character guys and great teammates. Shawzy is one of my best buddies, we spent a lot of time together, played together on the ice and sat next to each other in the locker room and on the plane so that one stings, obviously Jordie Benn too and Nic Deslauriers as well so we’re going to miss them but wish them the best. And I think the guys we brought in – Nick Cousins, Ben Chiarot, Keith Kinkaid – I think they’re all great players that can fulfil roles of the players that are gone now. I think they’ll do great and maybe everyone else within our organization, some young kids step in too, they’re all so talented and so good. We’re really excited about it.”

As for whom he is excited to see in training camp, Habs sophomore Jesperi Kotkaniemi is at the top of his list as the Finnish forward made a solid impression, recording 11 goals and 34 points in 79 games last season as an 18-year-old rookie.

“Really excited to see KK, obviously Jesperi Kotkaniemi take that next step,” said Domi. “He had such a great year and he’s only 19, he’s still a kid. I’m really pumped to see how he looks. I’m sure he’ll do great this year.

“And some of the younger guys like (Nick) Suzuki, I’ve heard good things about him, watched him in the OHL playoffs and Memorial Cup last year and he looked great so really pumped to see those guys, new faces from the younger talent come up. The league is getting younger every year so it seems as if those guys can step in and take on pretty heavy roles. Pretty confident both of those guys can do that.”

Next summer Domi is a restricted free agent as he completes a two-year deal he signed with the Habs in June of 2018. For now, a contract extension doesn’t appear to be on the horizon.

“It’s my agent’s job and our management. It does not include me so we’ll see. I just want to get back on the ice with the boys. That’s it.”