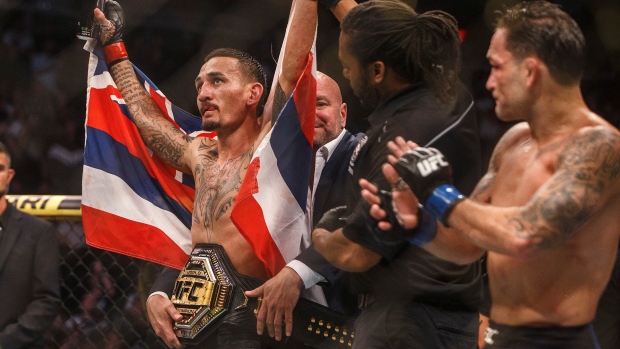 UFC featherweight champion Max Holloway will put his title on the line against Alexander Volkanovski at UFC 245 in Las Vegas, the promotion has announced.

Holloway most recently defended his belt at UFC 240 in Edmonton where he scored a unanimous decision victory over Frankie Edgar.

Prior to that, Holloway was unsuccessful in an attempt at winning the interim lightweight belt, as he lost to Dustin Poirier at UFC 236.

Volkanovski is currently on a 17-fight winning streak stemming back to his only professional loss in May of 2013.

The 30-year-old earned his way into the title fight by defeating former featherweight champion Aldo at UFC 237.

Volkanovski has won all seven of his UFC fights since making his promotional debut against Yusuke Kasuya at Fight Night: Whittaker vs. Brunson in Melbourne in November of 2016.

UFC 245 will take place at T-Mobile Arena in Las Vegas on December 14 and will feature at least one more title fight as Amanda Nunes will put her bantamweight championship on the line against Germaine de Randamie.