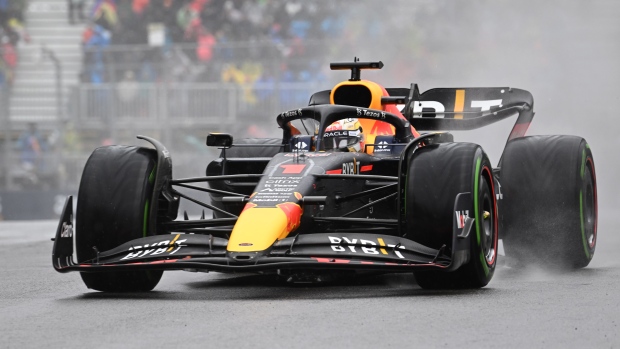 The Formula One championship leader and winner in Baku, Azerbaijan last weekend posted a time of one minute 21.299 seconds in what he called tricky conditions.

Seven-time world champion Lewis Hamilton moved up to fourth with his final lap.

His Mercedes' teammate George Russell paid the price for switching to soft tires as he slid off the track and onto the grass at Turn 2, which was one of the slickest areas of the track. Russell finished eighth.

The soggy conditions also proved costly for Red Bull's Sergio Perez, who was done for the day when he locked up and sailed straight into the wall between Turns 2 and 3.

Perez, who starts 13th on Sunday, had to climb through some underbrush as he walked back to the pits outside the track walls.

Williams' Alex Obon similarly skidded into the wall at Turn 6, but still made the cut in the second session.

The conditions were miserable, with pounding rain, high winds and a chilly 12 C at start time.

High spray off tires made visibility difficult. It was tough to even discern one driver from another as they splashed past the finish line.

"Can't see a lot ahead of me," Hamilton said early in qualifying.

The rain eased off and conditions improved markedly late in the second of the three qualifying sessions. A dry stretch of track appeared for drivers to follow.

Sunday's race will see Ferrari driver Charles Leclerc, who captured his fourth straight pole last week in Baku, starting 19th on the grid due to a 10-place grid penalty after an engine change.

Sunshine and 20 C is forecasted for Sunday's race.

Montreal's Lance Stroll, who's known to perform well in poor weather, was 18th in his Aston Martin, one place better than last week. Toronto's Nicholas Latifi (Williams) was 19th.

The Montreal Grand Prix makes its triumphant return at Circuit Gilles Villeneuve after COVID-19 forced its cancellation in both 2020 and 2021.

Unfortunately for the sea of fans in slickers and huddling under umbrellas Saturday, the weather hasn't been so festive this week.

This report by The Canadian Press was first published June 18, 2022.