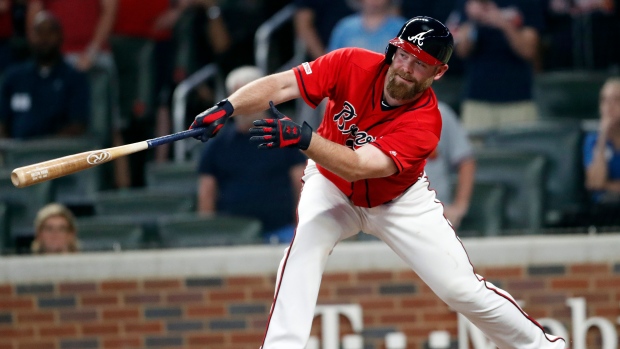 ATLANTA — This is why Brian McCann came back to play for his hometown Atlanta Braves, to deliver with his bat in a big spot.

"That was one of the best moments I've ever had," McCann said. "To be able to get the win and the fashion that it happened is something I'll always remember."

McCann capped Atlanta's three-run ninth inning with a two-run single off Héctor Neris, and the Braves beat the Philadelphia Phillies 9-8 on Friday night for their eighth straight win.

Atlanta improved to 23-9 since May 10 and opened a 2 1/2-game lead over Philadelphia in the NL East. It was the first game between the division rivals since the Phillies swept three games from the Braves in late March.

Most of the sellout crowd of 41,975, the largest of the season at SunTrust Park, stood on its feet after Dansby Swanson led off the ninth with a single. Nick Markakis walked with two outs, and Swanson scored on rookie Austin Riley's double.

McCann then reached down and drove an opposite-field single into the gap in left-centre, giving him 1,000 RBIs for his career.

McCann, a seven-time All-Star who grew up in the Atlanta suburbs, spent the last five seasons in the AL, but decided to return to the team that drafted him so he could help the Braves win a World Series.

"This is home for me," he said. "This town, this city means a lot to me. It's where I grew up. To be able to come back home and do this is right up there with one of the best moments I've ever had."

He compared this year's Braves to his former club in Houston, which won the World Series in 2017.

"It's very special," McCann said. "I just think the way we show up every day. The way guys go about their business, to the preparation, we show up ready to win every single day."

Neris (1-3) was attempting to go 15 for 15 in save chances this year, but couldn't find the formula on his 30th birthday. He recorded two outs and allowed three hits in Philadelphia's fourth loss in five games.

"I have the highest level of trust in him in that situation," manager Gabe Kapler said. "We felt really good in the dugout about it. It's just a devastating loss. We'll lick our wounds, come back and be ready to fight again."

Jerry Blevins (1-0) pitched the ninth for the win.

Bryce Harper and Rhys Hoskins each hit a two-run homer for the Phillies, and Scott Kingery added a solo drive.

Philadelphia dropped to 34-7 this season when scoring at least four runs. It had won 15 of its last 17 previous such games.

Harper, booed all night long, put Philadelphia up 3-1 in the third with his 12th homer, which sailed into the Atlanta bullpen in right-centre. Kingery's eighth homer landed in the left-field seats in the fourth.

Hoskins' 15th homer, coming off Dan Winkler, made it 7-2 in the seventh. Kingery, who went 3 for 4, doubled in the eighth and scored on a sacrifice fly to make it 8-4.

Atlanta starter Max Fried was chased with two outs in the fifth. He was charged with five runs and seven hits, leaving him with a 7.52 ERA in his last four starts.

McCann, Freddie Freeman and Josh Donaldson each hit a solo shot for the Braves. Ozzie Albies and Ronald Acuña Jr. each had two hits.

The Braves, who have scored at least six runs in six straight games, own their first eight-game winning streak since May 17-25, 2013.

Phillies: RHP Seranthony Domínguez (right ulnar collateral ligament) decided not to have surgery and underwent a platelet injection instead. He will be re-evaluated in three weeks.

Braves: LHP Sean Newcomb (1-0, 2.59 ERA) will make his first start since getting recalled May 4 from Triple-A Gwinnett.