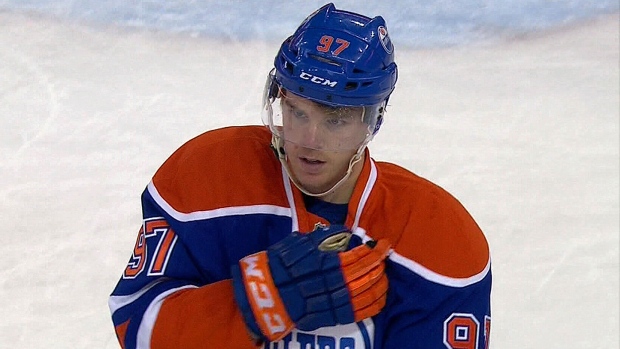 Edmonton Oilers head coach Todd McLellan said that Connor McDavid will be out "long term" after suffering an upper-body injury on Tuesday night.

According to TSN Hockey Insider Bob McKenzie, there's no official word but the injury is believed to be a fractured collarbone.

October's rookie of the month got tangled up with defencemen Michael Del Zotto and Brandon Manning and all three crashed into the boards behind the Flyers net.

McDavid got up with a hand covering his left shoulder and immediately left the ice. He did not return to the game.

Terry Jones of the Edmonton Sun tweeted that he saw McDavid with his skates off during the second intermission and his arm and shoulder in a sling.

"You never want to see a guy out of the lineup, especially a guy just starting his career and doing so well," said Oilers teammate Taylor Hall on the team's Twitter feed after the game.

McDavid has five goals and seven assists in 13 games this season.