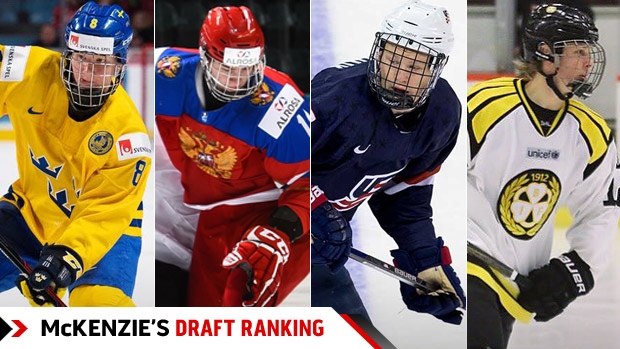 Let's call the 2018 NHL Draft the Year of the Defenceman; the Year of Swedish Defencemen, actually.

Two of the top four prospects on TSN's Preseason Top 20 2018 NHL Draft Rankings are Swedish blueliners, including the morning-line favourite to go No. 1 overall.

That would be Rasmus Dahlin, the 17-year-old, 6-foot-2, 181-pound left-shot defenceman who is playing his second season for Frolunda in Sweden's highest-level league, the SHL.

Nine of 10 NHL team scouts surveyed by TSN ranked the dynamic blueliner first overall. He first came to international prominence last year as a 16-year-old, playing against men in the SHL and putting together impressive YouTube and Twitter highlight reels of dazzling goals, creative playmaking and big hits.

If Dahlin were to go wire-to-wire as No. 1 and be taken first overall in 2018, it would be the first time a Swede has attained that honour since Mats Sundin, whom the Quebec Nordiques chose first overall in 1989.

That isn't to say Dahlin won't be pushed for the top spot over the course of this season.

The most obvious challenger to Dahlin is big Russian winger Andrei Svechnikov, who is No. 2 on TSN's preseason list. The 6-foot-2, 188-pound left-shot right winger, who will play this season for the Barrie Colts of the Ontario Hockey League, received the only other No. 1 vote from TSN's scouting panel. Eight other scouts have Svechnikov as No. 2 to Dahlin while one scout has Svechnikov at No. 4.

Svechnikov projects to be a potential elite goal-scoring NHL winger who can play the game any way you like.

“He has a real power element to his game,” a scout said. “He can dominate on the cycle, he goes hard to the net and isn't afraid to score the gritty goals from in tight in traffic, but he has great speed and high-end skill to beat people one-on-one. He has a fantastic shot that allows him to score from far out, too. He's ultra-competitive, doesn't take shifts off. He's the total package as far as what you want in a No. 1 winger in the NHL.”

The early consensus, recognizing the 2018 draft is a long way off (June 22-23 in Dallas), is that Dahlin and Svechnikov are in a class of their own atop this year’s draft eligible.

The only other prospect to get a vote at No. 2 is Dahlin’s countryman Adam Boqvist, a 5-foot-11, 168-pound blueliner who is said to have electrifying offensive ability. But there's a wider divergence of opinion on Boqvist, probably rooted in his sub-six-foot size. Three scouts surveyed by TSN did not include Boqvist among their top 10. Boqvist is the younger brother of New Jersey forward prospect Jesper, who was taken by the Devils in the second round of the 2017 draft.

Boqvist checks in at No. 4 on TSN's preseason rankings, behind Boston University freshman winger Brady Tkachuk. Seven of 10 scouts surveyed have Tkachuk as a top-five prospect in this draft and none of the 10 scouts had him outside their top 10.

Naturally, with two offensively gifted Swedish defencemen in the top four preseason rankings, there are bound to be comparisons to Ottawa Senators captain Erik Karlsson. One comparison may fit; the other, not so much, according to the scouts.

“Karlsson isn't a good comparison to Dahlin because Dahlin is so much bigger and plays a more physical game,” one scout said. “No one is saying [Dahlin] is going to be Nick Lidstrom or Victor Hedman, but in terms of style, he's probably closer to those guys than Karlsson.”

Dahlin is projected not only as a top-pair NHL defenceman, but potentially an elite No. 1 blueliner.

“Speed, skill, strength, offensive ability, physical play, defensive awareness - he has it all,” another scout said.

Boqvist, on the other hand, is going to get a lot of the Karlsson comparable, and for good reason, another scout says.

“I have no idea if he'll ever turn out to be as good as Erik Karlsson because Karlsson really is something special, but I can tell you this – (Boqvist) is better, further ahead of Karlsson, at the same age. I've scouted them both. As 16- or 17-year-olds, Boqvist is better than Karlsson was. Physically, their size, and the way they play the game, there's a [Karlsson] comparison to be made.”

Boqvist plays for Brynas in the Swedish junior league. He wowed scouts with a one-goal, eight-point tournament for Sweden at the Ivan Hlinka Under-18 tournament in August.

This is the second consecutive year a member of the Tkachuk family is expected to be taken in the upper echelon of the first round. In 2016, the Calgary Flames took Matthew Tkachuk sixth overall and the abrasive, agitating, offensive-minded winger made a significant and immediate impact, playing on Calgary's second line with Mikael Backlund and Michael Frolik.

Brady and Matthew, of course, are sons of former NHL power forward Keith Tkachuk and the apples didn't fall far from the tree. If anything, Brady is considered to be even more physical, abrasive and agitating than his older brother, but also possesses a strong nose for the net and ability to make plays.

It's something of an oh-no-Canada, year for the draft with two Swedes, a Russian and an American in a group of four at the top end, in preseason rankings anyway.

“I see Dahlin and Svechnikov as the clear top two in the draft starting out, but I also see those two plus Tkachuk and Boqvist as the clear top four going into the year,” a scout says. “It gets scattered after that.”

Saint John Sea Dog centre Joe Veleno is the flag bearer for Canada in this draft, at least to start the season. The 6-foot-1, 190-pound pivot was officially designated by Hockey Canada to have “exceptional” status in 2015, which allowed him to enter the Quebec League a year early, as a 15-year-old.

Veleno’s development was hindered somewhat last year when he missed a significant portion of the season with injury, but he plays a strong, hard two-way game and captained Team Canada at the Ivan Hlinka tournament in August.

The rest of TSN's Top 10 preseason rankings are as follows:

6. Quinn Hughes: A small (5-foot-9, 167 pounds) but supremely skilled and gifted offensive defenceman who will play his freshman season at the University of Michigan this year. The young American is the son of Jim Hughes, who formerly was a member of the Toronto Maple Leafs management team. Quinn's younger brother Jack, a centre who is playing for the U.S. Under-17 program in Ann Arbor, Mich., is projected as a potential elite pick in the 2019 NHL draft.

7. Filip Zadina: A skilled, smooth skating left-shot right winger from the Czech Republic who will play for the Halifax Mooseheads this season. Zadina is 6 feet, 198 pounds. He has the ability to make plays and finish them.

8. Ty Smith: A Canadian who plays for the Spokane Chiefs of the Western League, Smith is one of six defencemen in the top 10. Even though the Canadian pickings appear slim at the very top of this draft, Smith heads up a rather large contingent of smart and skilled Canadian defencemen under six feet tall who populate the rest of the first round and well into the second. Smith is 5-foot-10 and 176 pounds, but gets high marks for excellent hockey sense and poise under pressure. Smith isn't an elite offensive point-producing attacker or a punishing physical defender, but scouts say he's above average in most facets of the game, using his smarts and skating to be effective in all three zones.

9. Ryan Merkley: An offensive dynamo now in his second season with the Guelph Storm after being the first overall pick in the 2016 OHL draft. The 5-foot-11, 170-pound right-shot may be among the purest offensive talents in the draft – a temperamental but creative, high-risk blueliner who some scouts think has the potential to be a star while others wonder if he's closer to former offensive star OHL defenceman Ryan Murphy, who has yet to establish himself as a full-time NHLer.

10. Bode Wilde: A 6-foot-2, 197-pound defenceman with tremendous physical tools and high-end skating that, if his game comes together, could be a blueliner who impacts at both ends of the ice. Wilde is a dual American-Canadian citizen but for international hockey purposes has opted for Team USA. Wilde's mother is from Montreal, a former member of Canada's national downhill ski team. Wilde played last season for the U.S. U-17 program and is currently on the roster of the U.S. U-18 program. He originally committed to attend Harvard University next season but has since decommitted and is now talking to other schools.

TSN Hockey's Top 20 is available on our DraftCentre page on TSN.ca and TSN's mobile site.

Has all the makings to be a No.1 defenceman who impacts game in every way possible.

A dynamic winger, he’s equally adept at scoring and making plays. Has quick feet and hands, and plays with real determination.

Has the skill, brain and brawn to turn a game in his team’s favour. Willing to play the game any way you want to play.

High-end skill with the puck, combined with great vision and a creative mind. Also possesses a daring that challenges opponents in the most difficult ways.

Has great determination and desire to make a difference. His abilities are very good and he makes it hard for opponents to defend him.

Smooth-skating defenceman has outstanding poise and the ability to break opponents down methodically.

A gifted winger who can finish or create plays. He makes things happen on the move with excellent sense and feel.

Incredibly smart, he has an understanding of how to utilize his talents for the greatest gain – both individually and for his team.

Has unique abilities with the puck. His game is a combination of excellent vision, poise and creativity with high potential.

A very confident and assured defenceman who can contribute in multiple areas of the game. Has a lot of room to grow as a player.

The picture of calm, he raises his game when the stakes get higher. A very steady and complete player.

Excellent skater can break down defences and then take advantage with his playmaking and dynamic skill.

Very confident with the puck. Uses a combination of good hands, creativity and vision to make things happen offensively.

Has a big motor and the will to make things happen at all times. Has a solid set of skills and high potential with improvement in his skating.

A very well-rounded and skilled centre. There's no area of the game where he can't make a contribution.

Has a style of play and mind for the game that reminds me a bit of Sasha Barkov. He helps you win in so many ways.

Zero flash, but a high-substance player. Shows excellent sense and feel for game situations. He plays hard and gets results.

He can score because he knows where to be and is willing to pay a price to be there. Has the finishing skills to take full advantage of opportunities.

Very good skill and versatility allows him to play centre or wing. Understands how to contribute in multiple spots and situations.