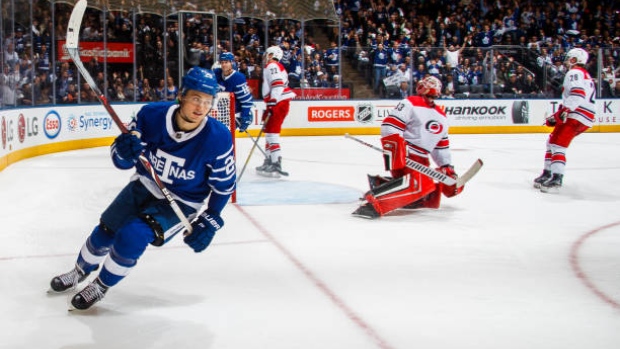 If William Nylander fails to sign with the Toronto Maple Leafs by Friday, he stands to forfeit 25 per cent of this season's salary due to games missed. That number will continue grow as the two sides progress toward the Dec. 1 deadline.

TSN Hockey Insider Bob McKenzie stated on Tuesday's edition of Insider Trading that the Maple Leafs could stand to benefit from an advantage in the salary cap the longer they wait to sign Nylander.

Lowering Nylander's cap hit in the future could greatly help the Leafs moving forward as they look to sign Auston Matthews and Mitch Marner next summer, but McKenzie told First Up on Wednesday that Nylander may now be looking for a large signing bonus this year to off-set his games missed, which would diminish the salary cap advantage for the Leafs.

"If William Nylander chooses to have a contract where the salary is really low in the first year, then it negates that benefit, which is benefit for the Leafs, and negates that theory that says the first year has a higher cap hit and the other years are lower," McKenzie said on TSN 1050 Toronto.

"You can manipulate this around depending on what you want and, in fact, if William Nylander said to the Leafs, 'You know what? I don't really want to pay a penalty for missing the first two months of the season, so why don't you give me a big, huge signing bonus in my first year and hardly any salary and that will make me whole. I won't have missed any time (for salary purposes).' The Leafs would be not inclined to do that for the reason that the cap hit wouldn't be larger in the first year and smaller in the remaining years. It would offset that advantage."

TSN hockey insider Bob McKenzie joins First Up with Michael and Carlo to discuss the Maple Leafs' negotiations with William Nylander, who they could be targeting in a trade, the impact the December 1 deadline will have and more.

McKenzie noted that while the Maple Leafs may now be looking to take advantage of the benefit of signing Nylander in-season, it was not a factor general manager Kyle Dubas considered as part of the negotiations with the restricted free agent.

"I should point out, even though this situation exists, this has not been the strategy for the Toronto Maple Leafs. There are some people who think, 'Oh yeah, Kyle Dubas knew that if he waited until the end of November...' It's nonsense. The Leafs wanted to get this guy signed long ago and this is not a strategy,” McKenzie said.

“Having said that, now that they're here – within two-to-three weeks of the deadline – and there is a potential opportunity here to have a cap hit of $8-$9 million in the first year and in the $6 million range in years two through six or two and three depending on whether it's a bridge deal or a long-term deal, why not take advantage of that? That plays to the Leafs strength, which is lots of cap room this year and not so much next year or the year after. So, it could become a factor in all of this before it's all said and done, but it was never the stated objective to drag this out just to manipulate the cap numbers."

McKenzie added that while the Leafs could stand to benefit from the cap implications of signing Nylander in-season, it could have a negative effect on the trade market for the winger. According to Cap Friendly, only four other teams – the Carolina Hurricanes, New Jersey Devils, Colorado Avalanche and New York Islanders – could afford to take on an $8.7 million cap hit this season.