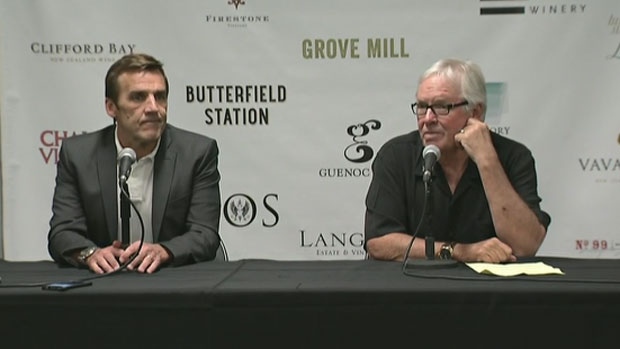 As general manager of the NHL's expansion Las Vegas franchise, George McPhee wants to build a team that will entertain fans in a unique market and bring hockey's hallowed trophy to the desert sooner rather than later.

Named the first GM in franchise history Wednesday, the seasoned McPhee had the deep resume to convince owner Bill Foley to choose him from among seven candidates. Now it's up to him to build Las Vegas from scratch to begin play in 2017-18, a task he knows won't be easy.

"Our mission here is clear: We're going to build an organization and a team that people in Nevada and Las Vegas will be proud of, and we're going to do it quickly and we're aiming at the Stanley Cup," McPhee said. "It's that simple."

McPhee most recently served as special adviser to New York Islanders GM Garth Snow and before that spent 16 seasons as GM of the Washington Capitals. As the Capitals' GM, McPhee oversaw a complete rebuild around star winger Alex Ovechkin that led to six consecutive playoff appearances before he was fired in 2014.

"He took Washington from being a team that was scrambling and sort of turned it around, so I think that experience will be a big plus," said Doug MacLean, who was the Columbus Blue Jackets' GM when they entered the league in 2000. "I think it's a real good fit."

McPhee has a strong history of drafting and developing players, and his extensive NHL experience earned him the position over younger candidates. Foley said McPhee got the nod over two other finalists because of his communication skills.

Foley said he wanted a GM who was focused, dedicated and had a "take-no-prisoner" attitude and feels he got that in McPhee.

"We all want to win, and he's going to win for us, but I like to have people that I really get along with and that I can communicate with," Foley said. "We had great candidates, they were all good. I just felt there was a little something extra with George."

Despite not winning the Cup in Washington, McPhee's success with the Capitals is what made him a sought-after candidate for openings in Toronto and Boston a year ago and now in Las Vegas. His experience in taking the second-oldest team in the league, tearing it down and creating a perennial playoff contender in the salary-cap era will suit him well in his new endeavour.

"I think I'll be hopefully even better the second time around," McPhee said. "There are lots of GMs in this business that have done a good job in one place and gone to the next place and won Cups. I'd like to be one of those guys."

A long rebuilding process McPhee said can be "negative fun" and called taking over a brand new team a phenomenal opportunity.

"Here you come in and it's a clean slate and you get to pick everyone in your organization," McPhee said. "This is what every GM wants to experience at some point in his career, to be able to start with a new franchise."

With Las Vegas — which Foley said doesn't have a name yet because of trademark issues — McPhee will have it a bit easier based on stricter NHL rules on how many players can be protected. The 58-year-old from Guelph, Ontario deemed it "a much more generous pool of players" than previous expansion teams have been able to choose from.

McPhee expects to have a nice start from the June 2017 expansion draft but cautioned that in the NHL teams don't win by spending big in free agency. He pointed to his enormous success in drafting well in Washington and said that will be the key to Las Vegas being a short- and long-term winner.

McPhee helped construct back-to-back gold-medal winners for Canada at the past two world hockey championships. Brad Treliving, his co-GM at the 2016 worlds and GM of the Calgary Flames, selfishly would have liked to see McPhee working outside the Pacific Division and the Western Conference.

"I was hoping maybe George could go back to the East, just take the team and move it to the East," Treliving said by phone Wednesday. "You're really happy for him. Then you take a deep breath and go, 'Oh great, another excellent manager that you're competing against.' But that's the game, everybody's good."

McPhee's duties with the Islanders included scouting, which will be one of his primary jobs next season in preparation for the launch of the franchise. McPhee expects to begin hiring staff next week and will spend the 2016-17 season watching plenty of games to find players at the amateur and pro levels.

For all his talk about wanting to win right away and win the Cup within Foley's eight-year window, McPhee has shown restraint and patience as a GM. A title is his goal, but first it's about putting a team on the ice that will thrill the 15,000-plus fans who signed up for season tickets to make the NHL in Vegas happen.

"The whole thing is a process," McPhee said. "We'll play a brand of hockey that people will like. I've never enjoyed that sit-back style of hockey. I like a team that's attacking all the time, pressuring pucks all over the ice. I love the way Pittsburgh played this year and they won the Stanley Cup. We'll be doing the same sorts of things."