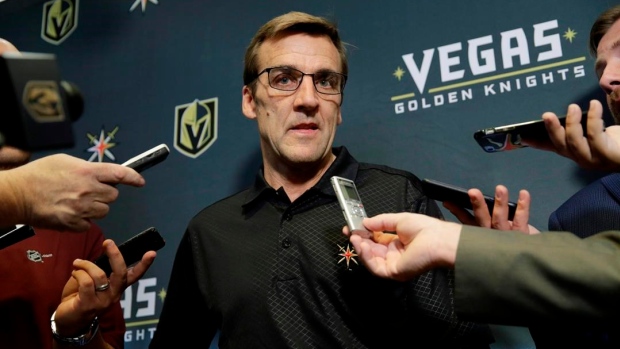 George McPhee is happy to talk about the Vegas Golden Knights, the team he built over the last year that now sits four wins from an improbable Stanley Cup.

But his old club? The one that stands in the way? Not so much.

As the Knights prepare to host the Washington Capitals in Game 1 of the final Monday, McPhee's fingerprints are everywhere on the series.

While the Vegas general manager's shrewd moves in the expansion draft have been well-documented, he also laid the groundwork for the Capitals' success, even though he wasn't around to see it through.

Washington's GM for 17 seasons, McPhee drafted 12 of the players on the current roster that beat the Tampa Bay Lightning 4-0 on the road in Game 7 of the Eastern Conference final.

McPhee's Capitals made it all the way to the Cup in 1998 before getting swept by Detroit in his first season in charge, but never again got past the second round before he was fired in April 2014.

Four years later, and to almost everyone's surprise, McPhee's new team and McPhee's old team — one that has suffered so much playoff heartbreak — are the only clubs left standing.

"It's a script that no one saw being written," he said in a phone interview earlier this week. "We're not supposed to be here."

But the man that drafted Alex Ovechkin, Braden Holtby, Nicklas Backstrom, Evgeny Kuznetsov, John Carlson and a host of other Capitals, didn't have any time to reflect on his own personal journey when it became clear Vegas would be facing Washington.

"I was just trying to be analytical," said McPhee, choosing his words carefully. "Right now it's just more about our club and what we're going to have to do in the next couple of weeks rather than rooting for or pulling for or wishing for an opponent."

While not wanting to discuss opposing players — even ones he drafted — McPhee did add that he was especially happy for Ovechkin, who he watched take a lot of heat for the Capitals' playoff failures.

"Unwarranted," McPhee said of the criticism his former captain endured.

But his sole focus right now is his own team, which roared out of the gate to start the season and never slowed down, finishing with 109 points to top the Pacific Division before sweeping the Los Angeles Kings, downing the San Jose Sharks in six games, and the Winnipeg Jets in five on the way to a 12-3 mark in the playoffs.

The Knights have demonstrated in the post-season they can play whatever style the opposition wants. Vegas took down the defensively sound Kings, the speedy Sharks and the physical, high-scoring Jets.

"We've played different types of teams to get here," McPhee said. "We're ready to play the next team and see what develops."

And as the hockey world tries to wrap its collective head around the development of a first-year franchise making it this far, McPhee and the Knights can't be bothered trying to figure it out themselves.

"There's not a lot of time reflect and to sit back and think like that," McPhee said. "It's all about keeping moving forward and trying to do whatever we can to keep our standards high.

"You cross your fingers and hope it continues to work and doesn't turn to dust in a few days ... once we started well we wanted to keep playing well and haven't had time to get sentimental or reflective."

That will no doubt come after the final.