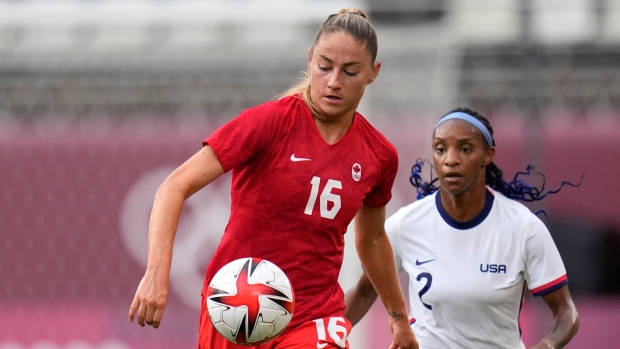 Canadian international Janine Beckie has been a leader for her country on the pitch. Now she’s taking on the mantle off it.

Beckie has joined the ownership group of Simcoe County Rovers FC, a semi-professional club in Ontario’s League1. The organization announced the news on Thursday.

De Guzman recruited Beckie last year after the pair got reacquainted while working together during TSN’s coverage of Euro 2020.

“It was just a really easy decision that I wanted to get involved, and when you have someone like Julian at the top, it makes that decision even easier,” Beckie told TSN.

De Guzman, who has the second-most caps all-time for the Canadian men, said he was impressed with the way Beckie carried herself during the Euros.

“It just made sense to have a face like Janine Beckie involved with any professional team in the country,” he told TSN. “She’s, for me, an all-arounder, on and off the field… For her to be present in the grassroots, and also the evolution of soccer in Canada – it’s just the perfect match to have somebody like that on board.”

Simcoe County, which was confirmed as a League1 expansion club last October, will begin playing this April and will be based in Barrie, Ont.

On the men’s side, League1 is in the third tier of Canadian soccer, with the Canadian Premier League (CPL) being at the top. For the women, it’s considered tier two, but with no professional league, it’s the highest level of women’s soccer available in Canada, along with other semi-pro leagues like Première Ligue de soccer du Québec (PLSQ) and League1 British Columbia, which is scheduled to kick off its inaugural season this year.

There has long been a demand for the Canadian women to have their own professional league, as they remain the only top 10 team in the world without one. Beckie, who plays overseas for Manchester City, sees this opportunity with Simcoe County as a step towards something bigger.

“I don't think anyone's under the impression that this is the end goal for Canadian women's soccer,” she said. “We will not be satisfied until there is a well-run, well-respected, high-level league in Canada. Being part of this project is a stepping stone in that direction, knowing that when we do get there – because we will – that Rovers is in a position to jump to the professional level.”

This is part of the vision that de Guzman has created for Simcoe County, and why he has brought on Beckie, Larin and Henry – to have a Canadian club that’s run by Canadian soccer minds.

“I feel this is a new approach and a new narrative that should be taken seriously,” he said. “Having those faces on the male and female sides, given the success they have done collectively as a nation but also individually in terms of their careers, that’s a soccer Masters in itself.”

De Guzman and the Rovers’ management team aspire for the men’s team to advance to CPL in four to six years. While there is no next level for the women’s team to look towards, de Guzman still believes in creating a professional environment as an example of what can be possible for the women’s game in Canada.

“We have so many talented players in the women's programs that we see,” he said. “We just hate to see a lot of those girls fall through the gaps. We want to give them that platform to jump into and grow, be themselves, develop and play in their own professional league in Canada.”

When Beckie and her Canadian teammates won Olympic gold at last year’s Tokyo Games, it created a lot of buzz around women’s soccer in Canada and the need to take the next step. But de Guzman believes not enough is being done.

“I don't want this gold medal just kind of happening,” he said. “I think there should be the ideas and the trust and the belief in the investments behind women's success.”

“We're at a place now that there's no more excuses, right?” Audra Sherman, general manager and head coach of the Rovers’ women’s team, told TSN. “When you win a gold medal, now there's pressure. So, where we stand is we're going to create the most professional environment we can to prepare us to have the foundation to be the first club to be looked at when things start to materialize and a pro league in Canada is finally launched.”

Beckie said it’s this outlook for the club that made it an easy decision for her to invest.

“I think the first thing that I noticed was just the professionalism of it, that they had everything mapped out – the vision for where they want to see the club go in Canada,” she said. “I think it creates opportunity for Canadian girls… to come and play in a professional environment, get good training, with the potential of it becoming professional at some point.”

Per club policy, financial details of Beckie’s investment were not disclosed. Her role with the team is still being defined, but she said she is passionate about being as “heavily involved” as her schedule will allow.

“When you have a pedigree like Janine Beckie… that's what you're striving for,” said Sherman, who was the third woman in Canada to earn her coaching A licence in 2018. “It's a great connection to players that come in that really want to play pro, get on a call with Janine, she could tell you straight out what it's like to be a professional.”

“If I was a player, and I saw the blueprint and the vision for Rovers – it's definitely something I would be a part of,” Beckie said. “I think they see my voice being very important in that, which I value, and I take a lot of responsibility to use that voice to reach out to players that could potentially really help them moving forward.”

Sherman said the team will be looking largely at players who have finished their collegiate careers that may have fallen through the gaps and are “lost in the system.” There will be open tryouts in February, and the club also said a final ownership announcement will take place next month.

Sherman and Beckie have already had several conversations about how to make the pathway for Canadian women better. Sherman was part of the Canadian national team program from 1995-97, and said while she’s seen a lot of progress, there is still much more to be done.

“That's why I'm so excited about the opportunity,” said Beckie. “The people at the top – that's what their aspiration is. They're investing time, money and energy into creating something that will eventually be what I think will probably be the place to go once we go professional in Canada.”