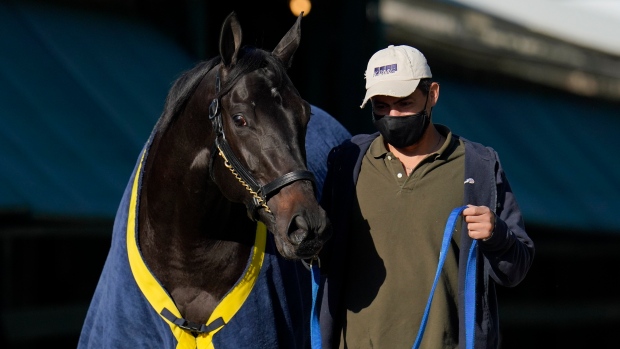 Medina Spirit will start from the third position in Saturday's Preakness Stakes.

Coming in as a 9-5 favourite, the Bob Baffert trained horse is still eligible to run in the second leg of American horse racing's triple crown despite controversy surrounding its Kentucky Derby win.

On Saturday, Baffert’s barn received word Medina Spirit had tested positive for an excessive amount of a steroid called betamethasone, which is sometimes used to treat pain and inflammation in horses. Baffert said on Tuesday his horse was treated with an ointment containing the drug once a day leading up to the Derby.

Baffert announced the positive test on Sunday but denied any wrongdoing, promising to be transparent in a follow-up investigation. Later on Sunday, Churchill Downs announced they were suspending Baffert from entering any horses at the track effective immediately.

Medina Spirit has not yet been disqualified from the Kentucky Derby. Under that scenario, runner-up Mandaloun would be named the winner.