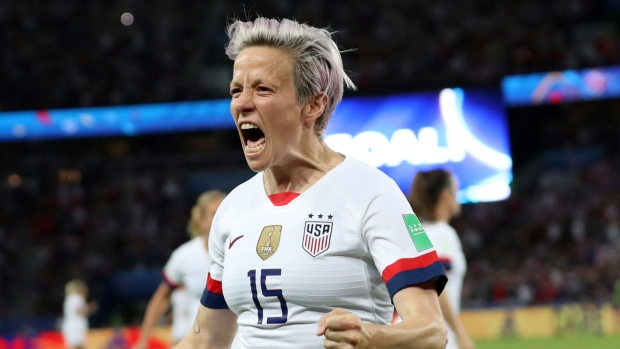 LYON, France — Still facing a backlash over saying she wouldn't visit the White House if the United States wins the World Cup, Megan Rapinoe said Wednesday that she considers herself a proud American.

"I think that I'm particularly, uniquely and very deeply American," she said. "If we want to talk about the ideals that we stand for, the song and the anthem, and what we were founded on, I think I'm extremely American."

Rapinoe commented on the dustup a day after the U.S. team's nail-biting 2-1 semifinal win over England. Rapinoe did not play against England because of a minor hamstring injury, but said she'd be ready to go for the final Sunday.

Last week in the days leading up to the quarterfinal against France, a video surfaced of Rapinoe's White House comment, which she punctuated with an expletive.

While the interview was from January, it attracted President Donald Trump's attention and he tweeted: "Megan should never disrespect our Country, the White House, or our Flag, especially since so much has been done for her & the team." Trump added that he would invite the team to Washington, win or lose.

Rapinoe has stood by her statement, except for the coarse language she used.

Rapinoe is known for being outspoken and using colorful language. She has been particularly vocal about equitable pay and the treatment of female athletes, while also critical of FIFA for not investing more in the women's game.

Two years ago, Rapinoe kneeled during the national anthem before a few matches. She said she took the action in solidarity with Colin Kaepernick, the former San Francisco 49ers quarterback who knelt during the anthem to call attention to racial inequality.

U.S. Soccer responded by adopting a rule that says players must stand for anthems. In France she has not sung the anthem or put her hand on her heart while it plays before each game.

"I think for the detractors I would have them look hard into what I'm actually saying and the actions that I'm taking. Maybe you don't agree with every single way that I do it and that can be discussed. I know I'm not perfect," she said.

In her impassioned comments, she said she believes she stands for truth and honesty, and "wanting to have the conversation."

"I feel very fortunate to be in this country, I'd never be able to do this in a lot of other places," she said. "But also, that doesn't mean that we can't get better, it doesn't mean that we can't strive to be better. I think this country was founded on a lot of great ideals, but it was also founded on slavery. I think we just need to be really honest about that, and be really open in talking about that so we can reconcile that and hopefully move forward and make this make country better for everyone."

Rapinoe hasn't been the only American who has faced criticism at the World Cup. The whole team was chastised when players celebrated every goal in a 13-0 rout of Thailand to open the tournament. Alex Morgan's tea-sipping celebration after her goal against England was also knocked.

"Wah, wah, wah. We're at the World Cup. I don't think anyone truly believes we disrespect the game or our opponents," Rapinoe said. "What do you want us to do? We work hard, we like to play hard. "