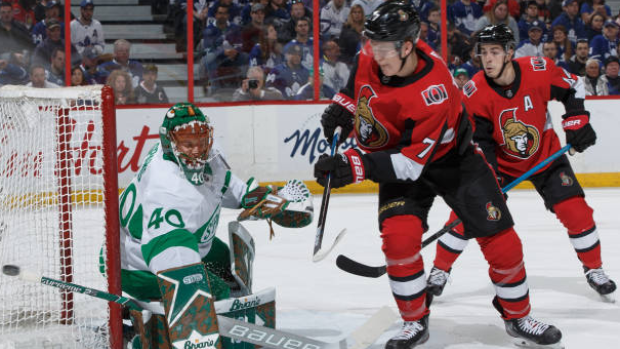 Ottawa Senators owner Eugene Melnyk compared his team’s rebuild to that of the rival Toronto Maple Leafs on Friday, saying he intends to ensure his team doesn’t make the same mistakes.

Melnyk told Ottawa's CFRA 580 Radio Friday that trading Mark Stone, Matt Duchene and Ryan Dzingel at the trade deadline last month has set up an important summer for his management staff. He added, however, that the Senators will not rush in their rebuild.

"You don't do a rebuild with a short-term view. You've got to have, and it’s tough in sports, a five-year outlook and if you don't all you're doing is patching up. I know a team that you know that's done it for 53 years," Melnyk said referring to the Maple Leafs. "They've been selling out, but all they do is they've been patching up. Finally, they collapsed the team, said ‘We've got to a rebuild,’ but mistakes were made and somebody forgot about defence.

"This next six months are going to be critical for [general manager] Pierre [Dorion] and his team, and the whole operations [staff] to get their act together in a big way to be able to use these assets – all the 17 picks we have in the first three rounds for three years, plus all of the other prospects. This core group, that's sitting in Belleville and playing up already are going to stay. And yes, they're all going to need those big contracts and I'm prepared to step up for that.

"And whether we get support at the attendance or not, I'm going to do this because it's something I'm committed to and we intend to win a Stanley Cup and I don't have another 50 years to do it."

The Maple Leafs, who finished last in the NHL in 2015-16, have the sixth-best record in the NHL this season at 44-25-5. The team signed Auston Matthews to a five-year extension last month and is expected to have a cap crunch this summer with forwards Mitch Marner, Kasperi Kapanen and Andreas Johnsson all in need of new contracts.

"They're going to have a tough time winning a Stanley Cup without defence," Melnyk said. "They're hitting the cap. They can't bring anybody new in, so they're stuck. And that's where you have to be extremely careful. [The Senators have] something like 17 draft picks in the next three years in the first three rounds and that's a huge inventory of draft picks, plus everything we have in Belleville, plus, plus, plus."

The Senators sit last in the NHL this season with a 25-43-6 record. They currently own the highest odds of winning the first-overall pick in June's NHL Draft, though their pick is property of the Colorado Avalanche due to the Nov. 2017 deal that brought Duchene to Ottawa. The team does, however, own the Columbus Blue Jackets’ first-round pick, barring it falling in the top three.

The Senators have traded Mike Hoffman, former captain Erik Karlsson, Stone, Duchene and Dzingel over the past 12 months and currently have the fifth-lowest cap total in the league. Melnyk defended the team's decision to move out star players and reiterated that he believes the team will have a long Stanley Cup window in the near future.

"I think we did a terrible job in communicating exactly what the plan is in a rebuild. And when you do a rebuild, unlike others that you may have seen people say, ‘Hey, we're going to rebuild and try to...’ (and) it's just more show than substance.

"In our case, it's extremely rare for a team just to say, 'You know what? Everybody's out.’ We need a team that is consistently young. We need a handful of veterans to take them through some of the rough patches that they'll go through as they grow into being NHL players. Our average age in three years from now is going to be 23, 24, it's going to be the youngest team and I'm hoping to have a five or six-year run with these players.

"A lot of people were really upset about us trading away the three in the end - Duchene, and Stone, and Dzingel - and if you think about it, they're all looking for seven, eight-year contracts at the age of 27 and anywhere from $8-$10 million a year. You think about it five, six-years from now, they are all going to be in their almost mid-30s – like 33, 34 – and you're going to have all these kids coming up. We have eight, actually nine – 10 if you include the goalie – 10 potential stars sitting in Belleville and they're playing and they're playing their hearts out and they want to make the NHL. What we're hoping for is that out of that group, we have three or four stars – real stars."

Melnyk said in February that he expects the team's rebuild to take another season or two, but when his general manager believes the team has all of its foundation pieces in place he plans for the Senators to spend close to the NHL's salary cap every year for a five-year run from 2021-25. He added the team's current rebuild is a blueprint to bring a Stanley Cup to Ottawa.

The team has added promising prospects over the past year, like Vitaly Abramov, Rudolfs Balcers and, the centrepiece of the Stone trade, defenceman Erik Brannstrom.

Melnyk's most direct broadsides were directed at Ottawa mayor Watson, who has voiced his criticism of the Senators owner for his part in a bungled arena development deal at Lebreton Flats, a couple of blocks away from Parliament Hill.

"He is so lucky that I keep my mouth shut," Melnyk said on the radio show. "I'd be very careful if I was him walking around mouthing off, because it's very counterproductive.

"I'm trying to do everything for this city, and with him opening up like that, all he does is the NHL offices look at it and say 'Hey, do we really want to bring more events to this city?'"