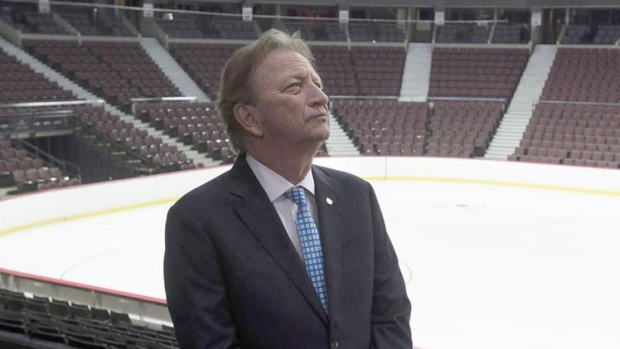 OTTAWA — On a weekend celebrating the game of hockey in the nation's capital, Ottawa Senators owner Eugene Melnyk put a damper on the festivities.

Melnyk brought up the possibility of relocation, took a shot at fans and said a new downtown arena might never happen while speaking during the Senators' alumni game taking place at Parliament Hill Friday night. His comments came less than 24 hours before Ottawa hosts the Montreal Canadiens in the NHL 100 Classic.

Melnyk denied rumours the team was for sale, but did insinuate relocation could be considered.

"If it doesn't look good here, it could look very, very nice somewhere else, but I'm not suggesting that right now. All I'm saying is that I would never sell the team."

Melnyk says the constant challenge to sell tickets is frustrating. In his opinion he's spending more than enough on player salaries to make this team a worthwhile investment for fans.

"At one point one of the two have to break," said Melnyk. "You can't keep spending at the top end and getting the lowest revenues.

"Here we're fighting everyday to sell a ticket, honest to God. When you get to the third round of the playoffs and you're begging people to buy a ticket something's wrong with that picture so we're just hoping that changes."

Melnyk says he's running most areas of the organization on a shoestring budget and the next area to be cut could be players' salaries.

Melnyk went on to add the redevelopment of Lebreton Flats in downtown Ottawa is not a given, saying he's not convinced a downtown arena is a necessity for this franchise.

"I'm all in, but it wouldn't be a disaster for us at all if Lebreton didn't happen," said Melnyk. "We need something to happen at one point. Something's got to break somewhere and I mean a positive break. We're just basically sitting it out, working through with the (National Capital Commission), and they've been co-operative and reasonable and we're just going to try to continue to get that completed. I don't trust anything happening our way necessarily."

Melnyk's comments come in addition to the team's on-ice struggles.