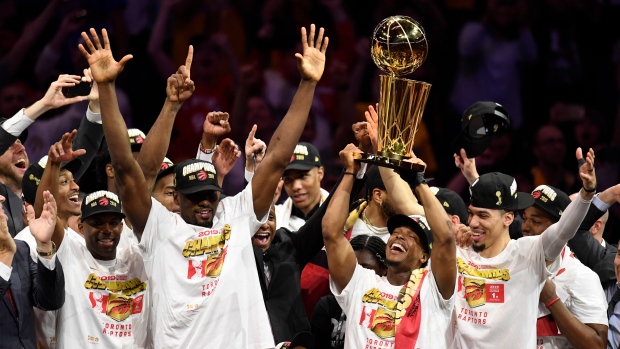 After a rough finish to Game 5, Raptors point guard Kyle Lowry wasted no time making his impact felt in Game 6.

Lowry scored the first 11 points, driving for the first two points of the game before draining a trio of three-pointers. He then found Pascal Siakam for another three to put the Raptors up 14-6.

A good start was crucial with the Warriors crowd ready to erupt in the final game at Oracle Arena.

Lowry finished the first quarter with 15 points and three assists as the Raptors led 33-32.

With 32.6 seconds left, Raptors star Kawhi Leonard fouled Klay Thompson on a three-point attempt as he tried to disrupt the Warriors' sharp-shooter.

It was his third foul — and second in the last three minutes of the first half — and put Leonard in a tough situation to start the third quarter.

Thompson nailed all three free throws before Lowry finished the half with a driving two, giving Toronto a 60-57 lead at the break.

After Lowry missed a three midway through the third quarter, the Warriors raced down the court in transition.

Lowry hustled back as Andre Iguodala went for a layup and was called for a foul — his fourth of the game — with 6:53 left in the third quarter.

Lowry — by far the Raptors' most effective player for the first 29 minutes of Game 6 — thought he got all ball, but the refs saw things another way. Raptors coach Nick Nurse then had to take Lowry out, replacing him with Danny Green.

Iguodala missed both free throws, keeping the Raptors in front 72-70.

As Thompson went up for a dunk late in the third quarter, he was fouled hard by Green and came down awkwardly on his left leg.

Thompson immediately grabbed his left knee on the floor. He was helped off the floor by Warriors staff and appeared to be headed back to the locker-room.

However, Thompson had to take the free throws. The crowd roared as Thompson walked back to the court and then made both shots.

The Warriors then took him out and he returned to the locker-room with Golden State up 85-80.

Thompson then was pulled out and did not return to the game. He was seen leaving the arena on crutches.

Stephen Curry responded with two free throws with 18.5 seconds left to narrow the gap to one.

But after a Toronto inbounds play, Danny Green threw it away on a pass to Siakam, causing a turnover with 9.6 seconds left.

The Warriors got the ball to Curry, but he missed a three-pointer and the ball got to midcourt. Draymond Green dove for it and tried to call timeout with 0.9 seconds remaining, but the Warriors didn't have any left — so it was ruled a technical foul.

The Raptors got the ball in and Leonard was fouled again, with no time running off the clock. He made both free throws to seal it.