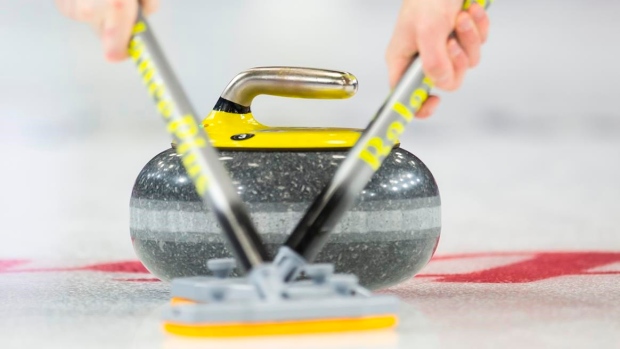 The men's playoff round at a curling bonspiel was cancelled Sunday after a player received a notification from the COVID Alert app.

The app notifies a person when they have been in contact with someone who has tested positive for COVID-19.

Gerry Guerts, organizer of the Stu Sells Oakville Tankard, said that all participants were required to download the app before the competition to provide "an extra layer of security for the players."

"While no player has tested positive, we did receive an alert on their COVID Alert app that they had been in contact with a positive case," Guerts said in a statement. "Under protocols, this player will self-isolate, and the entire team will receive a test to ensure there was no spread."

Specifics on the exact timing of the notification and who received it were not released.

The competition was one of the first prominent bonspiels to be held this season. A handful of well-known rinks were in the 24-team field.

"We agree this is the right decision for the safety of everyone involved," Team Jacobs said in a Twitter post.

Rob Ainsley was to meet Robert Desjardins in the other semifinal. The men's consolation final between Greg Inglis and Sam Steep was also cancelled.

"It's sad that we're not going to see a good men's final today but better safe than sorry," event sponsor Stu Sankey said on the event's online broadcast. "And that's why we have the protocols in place so we can get a jump on it. I think it's the right call."

Curling is slowly resuming play around the world in a season that remains in flux due to the global pandemic. Several top events have been postponed or cancelled with 2021 competitions tentative at best.

However, this year's competition, moved to Waterloo since the regular Oakville host club has yet to reopen, was limited to domestic competitors with most players from Ontario.

The women's playoffs went ahead as scheduled Sunday as the women did not play at the same time as the men over the first two days of the competition, Sankey said in a text.

There was one draw Sunday morning where men and women played at the same time, he added, but they were several sheets apart.

We went the distance and kept our distance in our first event of the season! Thank you to @Stusellsto and organizers who hosted the Oakville Tankard and all of the teams as we all worked through the new guidelines and safe processes. It was a great start to our season. 🏆 pic.twitter.com/hX2NYCaizC

Several return-to-play protocols were in place at the $10,000 competition, which hosted a mixed doubles event a week earlier.

All stone handles were sanitized before each draw and distancing and venue capacity rules were in effect.

Players arrived in their uniforms to minimize locker-room interaction. Warmups were done in the parking lot or viewing lounge and teams took to the ice in stages.

Curlers wore masks but could lower the covering when throwing or sweeping on the opening day Friday. The rule was adjusted Saturday to make mask use mandatory at all times on the ice, Sankey said.

To help with distancing, two players followed the rock down the ice but only one could sweep.

The skip in control of the house was stationed in the rings area but was not supposed to put the broom down. The other skip waited by the boards.

Frisbee-sized logos on the ice served as designated waiting areas for players when the opposing team threw stones.

Another 24-team event, the Stu Sells Toronto Tankard, was scheduled to be played at the same club from Oct. 9-12.