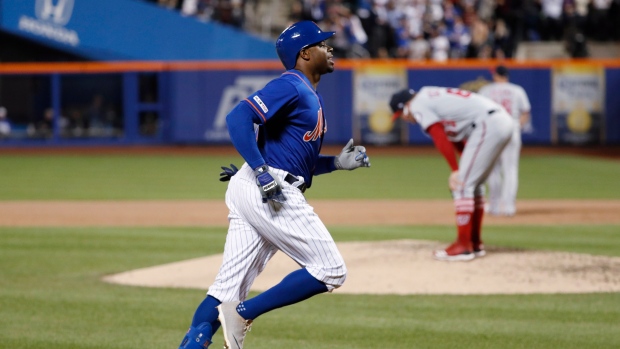 "It was a normal day when it started," Davis said after a memorable 6-1 win over the Washington Nationals.

Juan Lagares hit a three-run double off Nationals closer Sean Doolittle with two outs in the eighth and Davis added a three-run homer, his first in 134 career plate appearances as a pinch hitter.

New York, which had been 0-23 when trailing after seven innings, won its third straight following a five-game losing streak and a front office endorsement of oft-criticized manager Mickey Callaway. But star second baseman Robinson Canó left early with a left quadriceps injury that could send him to the injured list.

Signed to a minor league contract in the off-season, Davis had spent the season's first seven weeks at Triple-A with the Syracuse Mets, who played at Lehigh Valley on Wednesday. About 5 p.m., manager Tony DeFrancesco told Davis to get to New York — after the Mets learned an MRI showed Brandon Nimmo had neck inflammation that would result in a stint on the injured list.

Davis originally thought DeFranceso was joking. Then he showered and called an Uber for the 112-mile trip to Citi Field that took 2 hours and, according to Davis, cost about $234. His driver, Jason, is originally from Brooklyn.

"Me and Jason, we got to know each other," Davis said. "But I'm not going to foot that bill."

Davis arrived in the third inning.

"I think I saw him in the fifth or the sixth for the first time," Callaway said.

Playing for his eighth big league team in 14 seasons, Davis couldn't find his way back to the Mets clubhouse and had to ask for directions

"I feel like I got lost for about a month and half, and two months," Davis said with a grin. "Now I'm fine."

Davis's 62nd longball made him the 11th player to homer in his first at-bat for the Mets. He and Callaway shared a dugout for another big home run — his tying, two-run drive for Cleveland against Aroldis Chapman in the eighth inning of World Series Game 7 three years ago, a game the Chicago Cubs won in 10 innings.

"He remembers. I remember. I think they remember, too," Davis said.

Callaway was the Indians pitching coach. When it was pointed out the stakes were not quite the same, he laughed and quipped: "It felt like it to me."

Scherzer struck out nine, stranded seven runners in six innings and was removed after 109 pitches — one shy of matching Cleveland's Trevor Bauer as the only hurlers since the start of the 2018 season to throw 110 pitches in five straight starts.

Washington's bullpen has a 6.89 ERA, and the Nationals have won just twice in 11 starts by Scherzer, who remained 2-5.

Adeiny Hechavarría doubled over left fielder Juan Soto with one out in the eighth against Kyle Barraclaugh (0-1) and Todd Frazier walked with two outs.

Doolittle hit Carlos Gómez with his first pitch, and Lagares, in an 0-for-12 slide, followed with a one-hop double to the left-centre wall that made him 3 for 5 against the All-Star. Lagares is getting more playing time than expected with Michael Conforto and Nimmo on the injured list.

"I just keep working hard and stay positive and try to take advantage of every opportunity," Lagares said.

Wilson Ramos was intentionally walked, and the 38-year-old Davis, batting for Drew Gagnon (3-0), capped a nine-pitch at-bat with a drive over the left field wall. Doolitte's first 13 pitches were fastballs.

"In the context of how our season's going, it hurts even more," Doolittle said. "I'm really frustrated. I'm disgusted with myself. I let the team down, and it hurts."

Canó got hurt running to first base when he grounded out in the third following J.D. Davis' two-out double and was sent for an MRI.

"He took a few hard steps out of the box, got about halfway down the line and it grabbed on him," Callaway said.

An eight-time All-Star, Canó twice failed to run out grounders last weekend in Miami, both of them resulting in double plays.

"I'm sure that he was aware the needs to get going a little bit," Callaway said.

Four pitchers combined on a three-hitter for the Mets, who stretched their home winning streak to six.

"When you win, you have a different air about you, a different confidence and I'm definably feeling that part of it," Callaway said.

"It's going to turn around," manager Dave Martinez said, "but we have to believe that it will. We got to will it."

Nationals: LHP Dan Jennings, who had been designated for assignment, elected free agency.

Nationals: 1B Matt Adams was 1 for 4 in his first game since May 4 after recovering from a strained left shoulder. To clear a roster spot, INF Adrián Sanchez was optioned to Double-A Harrisburg, leaving 3B Anthony Rendon as the backup shortstop. ... RHP Trevor Rosenthal, who last pitched for the Nationals on April 24 and was put on the IL with a viral infection, had an erratic one-inning appearance for Harrisburg on Tuesday, allowing two walks, a hit batter, a wild pitch and a two-run double. He likely will make another minor league appearance Thursday.

Mets: INF Jeff McNeil did not play because of a tight left hamstring.