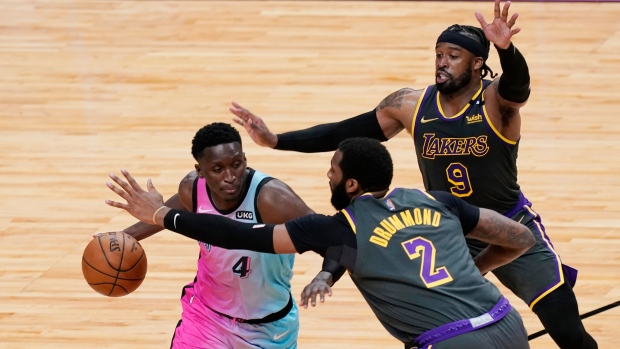 Miami Heat guard Victor Oladipo has elected to undergo surgery on his right quadriceps tendon and will miss the rest of the season, the club announced on Wednesday.

UPDATE: Victor Oladipo has decided to undergo season-ending surgery on his right quadriceps tendon. The surgery will take place tomorrow in New York. There is no timetable for his return at this time.

There is no timetable for his return.

The 29-year-old, who last played April 8, is averaging 19.8 points, 4.8 rebounds and 4.6 assists over 33 games split between the Heat, Houston Rockets and Indiana Pacers this season.

Oladipo began the 2020-21 season with the Pacers before being dealt to the Rockets as part of the James Harden to the Brooklyn Nets trade in January. After 20 games in Houston, the Rockets traded the two-time All-Star to the Heat in late March before the trade deadline.

Oladipo is in the final year of a four-year, $85 million contract and will become a free agent at season's end.

Miami currently sits fourth in the Eastern Conference with a 38-31 record.