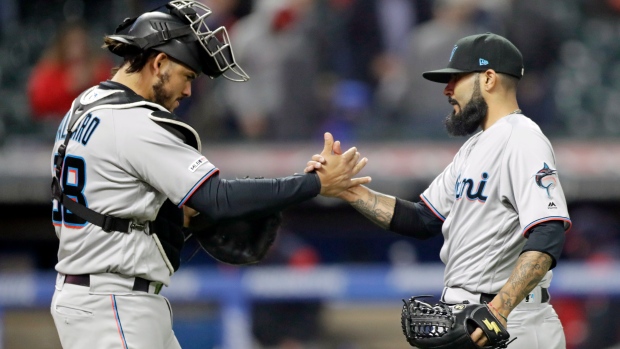 At catcher, at least, the Miami Marlins appear in good shape.

Alfaro, who returns as the starter, reported for spring training this week 15 pounds lighter thanks to an active off-season regimen that included time on his dad's small farm in Colombia.

Cervelli signed a $2 million, one-year contract last month after missing much of 2019 with a concussion that limited him to 48 games for the Pirates and Braves. The 12-year veteran has a long history of concussions, but said he's now fully healthy and anticipates a bounce-back season as more than just a backup.

Alfaro also wants to play a lot — even more than the 130 games he logged last year. That's why he spent the off-season improving his fitness.

He helped his dad by herding cattle and harvesting yuca roots. He also took to the track, running laps and 100- and 200-meter sprints.

“It was hard,” he said. “The first week I was almost dying. But I want to play as many games as I can play, and my body has to be ready to go every day. I knew I had to take some weight off. That will help my knees.”

When Alfaro reported to camp, the difference was noticeable to manager Don Mattingly.

Alfaro joined the Marlins a year ago in the trade that sent J.T. Realmuto to the Phillies. Realmuto made the All-Star team for the second year in a row in 2019, but the much more affordable Alfaro had a solid season, batting .262 with 18 homers.

At 26, he figures his productivity has yet to peak.

Among all positions, including pitching, the Marlins ranked above average in WAR only at shortstop last year as they lost 105 games. With the addition of Cervelli, they could be above average at catcher this season.

“Francisco has shown he has done it, and we think he can still play,” Mattingly said.

Should Cervelli flop in spring training, the Marlins also have Chad Wallach, who has played 40 games at catcher for them in the past three years.

Cervelli, now 33, was a teammate of Marlins CEO Derek Jeter with the Yankees in 2008-14. He was the Pirates' opening day catcher for the fifth consecutive season last year, suffered a concussion in May and didn't play again until Aug. 24 after signing with the Braves. He had a 1.066 OPS in 14 games for them.

Because of his concussion history, Cerevelli toyed with a position switch while idle last summer, but decided he wants to play at least a couple more seasons behind the plate.

“The other positions are boring,” he said. “I’m not a baseball player. I’m a catcher.”