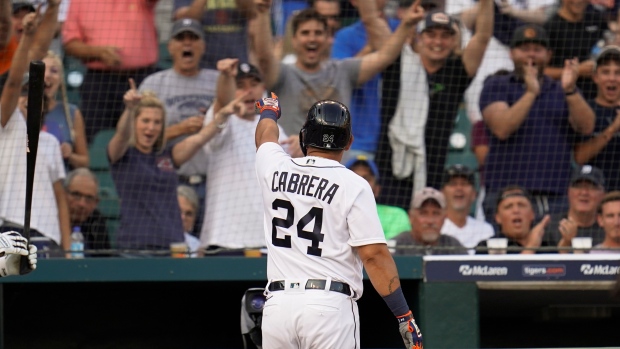 “There's no one else like him,” Tigers rookie Akil Baddoo said. “He can hit any pitch out of any part of the stadium. It is incredible to watch.”

Cabrera added a single, giving him 2,944 career hits and moving him one ahead of Frank Robinson for 36th place all-time. As has become customary, the Tigers got both balls for Cabrera.

“I have no idea how many he's going to end up with, but I'm pretty sure he's going to need an extension to his house,” Tigers manager A.J. Hinch said. “It isn't just the numbers — it is the people he passes every day. Those are the greatest players in history.”

The Red Sox have lost a season-high five straight games, including an 0-4 start to a 10-game road trip.

Tigers starter Wily Peralta allowed two runs on six hits in 4 2/3 innings, and five relievers combined to shut out the Red Sox in the final 4 1/3 innings.

Gregory Soto pitched the ninth for his 12th save in 13 attempts.

“This is the worst season of my career, and I'm just trying to find some way to help us win a game,” he said. “I feel good out there, and I'm throwing four pitches for strikes, but I'm not getting the results I expect.”

Boston took a 1-0 lead in the first, thanks to two defensive mistakes by the Tigers. With two out, Xander Bogaerts hit a grounder to third that Jeimer Candelario juggled before throwing widely to first. J.D. Martinez followed with a single to right, and Bogaerts scored easily when Robbie Grossman couldn't pick the ball up cleanly.

Hunter Renfroe led off the second with his 17th homer of the year, and Cabrera did the same thing in the bottom of the inning.

“When Miggy hits that homer, the fans got excited because they changed the board in left-centerfield to ‘498,’ but that was more important on the scoreboard,” Hinch said. “They were up 2-0, and that's not a team that loses a lot of leads. He got us right back into the game.”

The Tigers loaded the bases with no outs in the fourth. Richards struck out Eric Haase, but Harold Castro hit a sacrifice fly to make it 2-2.

Boston had two on with two out in the fifth when Kyle Funkhouser (5-1) replaced Peralta and struck out Alex Verdugo.

Akil Baddoo gave the Tigers a 3-2 lead with an RBI double in the fifth, ending Richards' night.

“They loaded the bases with no one out in the fourth, and he held them to one run, but then he walks the leadoff guy in the fifth,” Red Sox manager Alex Cora said. “They get the double and we're into our pen. We don't need seven innings every night from our starters, but we have to getting at least five.”

Grossman's RBI single put the Tigers ahead 4-2 in the seventh.

The Red Sox placed closer Matt Barnes on the COVID-19 injured list after he began to show virus-like symptoms on Tuesday, but manager Alex Cora said after the game that Barnes tested negative for COVID and was expected to be back on Wednesday.

Barnes was isolating at the team hotel while awaiting the results of the test. Boston filled his roster spot with utilityman Marwin Gonzalez, who had been out since July 13 with a right hamstring strain.

“(Funkhouser) came into a huge situation and got us out of it, and then the next four guys did exactly what we needed them to do,” Hinch said. “That's how we want our bullpen to work.”