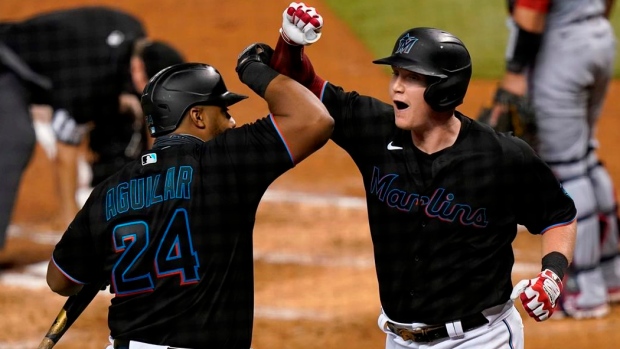 MIAMI — Miguel Rojas and Garrett Cooper each had a double and a homer and the Miami Marlins beat the Washington Nationals 7-3 on Saturday night.

With the win, Miami maintained its hold on second place in the NL East.

“We're close to the finish line, we're close to something this organization hasn't done in a long time,” Cooper said of Miami's 17-year post-season drought. “Everyone knows that and we're trying to keep it on an even keel.”

Starling Marte and Brian Anderson each singled twice for the Marlins, who had 14 hits against Washington starter Patrick Corbin. Miami also got two hits from Lewis Brinson and Chad Wallach.

Miami struck early, with Rojas hitting a leadoff homer off Corbin (2-6) in the first. Rojas drove Corbin’s fastball over the wall in left-centre for his fourth homer of the season.

Andrew Stevenson’s two-run single in the fourth got Washington within 3-2 before Miami responded with RBI singles from Corey Dickerson and Wallach in the bottom of the inning.

The Marlins padded their lead with an RBI single from Jesus Aguilar in the fifth and Cooper’s run-scoring double in the sixth.

Richard Bleier retired the four batters he faced to set up Brandon Kintzler, who pitched a scoreless ninth.

Corbin was lifted after six innings. The left-hander allowed seven runs and struck out seven.

“One of those days, it wasn’t very good,” Corbin said. “They came out swinging, they didn’t miss any of my mistakes, they came to hit it.”

The loss dropped the Nationals to 19-31 — the same record before their 74-38 finish and eventual run to a World Series championship last season.

“I’d rather be 31-19, but hey, we just gotta keep battling, we gotta keep it going for the next 10 games or whatever it is and just try to go 1-0 (Sunday),” Washington manager Dave Martinez said . “That’s where we’re at right now.”

After enduring a 22-pitch fourth inning, Lopez rebounded in the fifth, when he retired Victor Robles on a flyout to centre and struck out Trea Turner and Juan Soto. Lopez limited the Nationals to the two-run fourth after Carter Kieboom was thrown out at home on an attempted double steal for the third out.

“That was huge and that gave me an extra boost through the fifth and into the sixth,” Lopez said.

Although he’s driven in nine runs and hit .318 in the current homestand, Marlins starting catcher Jorge Alfaro didn’t start Saturday. Manager Don Mattingly opted to go with Wallach because of his work with Lopez in the right-hander’s previous start. Lopez allowed a combined 12 runs over 5 2/3 innings in starts against Tampa Bay and Atlanta before Wallach caught him in a seven-inning, one-run outing against Philadelphia on Sept. 14.

“I thought Chad was really good with Pablo the last time,” Mattingly said. "(Lopez) kind of got back on track and I wanted to leave that combination.”

Nationals: RHP Aaron Barrett (right tricep tightness) received treatment Saturday. The reliever walked and hit the two batters he faced before leaving with his injury in the second game of Friday’s doubleheader.

Nationals: RHP Max Scherzer (4-3, 4.04) will start the first game of a seven-inning doubleheader against Miami on Sunday. The second starter has not been announced.

Marlins: RHP Sandy Alcantara (2-2, 3.45) will face the Nationals in the first game. Miami has not announced the second starter.