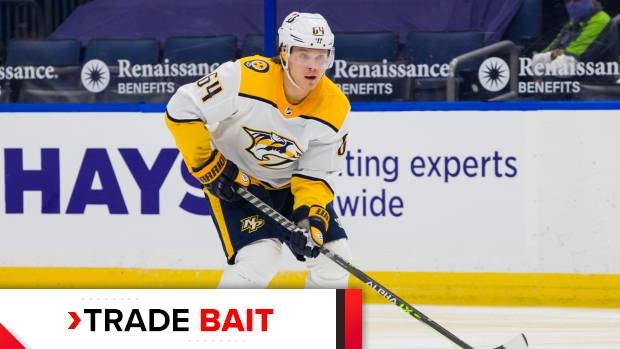 With less than three weeks to go until the NHL's trading deadline, two Nashville Predators sit in the top three on our updated Trade Bait board, with winger Mikael Granlund emerging as a hot commodity.

As reported by TSN Senior Hockey Reporter Frank Seravalli on Tuesday on Insider Trading, Granlund is the Toronto Maple Leafs’ primary target ahead of April 12, but there are a number of complicating factors for GM Kyle Dubas, including the NHL's 14-day quarantine.

According to Seravalli, another factor seems to be some slight hesitation on the part of the Predators now that the Chicago Blackhawks have come back to earth in the standings. That shift could have the Nashville in wait-and-see mode rather than sell mode.

Topping the list again is Nashville's Mattias Ekholm and, as TSN Hockey Insider Pierre LeBrun reported on Tuesday, the price is steep for the veteran defenceman - a three-asset ask, which includes a first-round pick, an elite prospect and a third asset that can take on different forms.

On top of that, LeBrun adds that the Predators do not have to trade Ekholm at the deadline. He is signed through next season and there is the internal debate for Nashville – is their best offer going to come at this deadline, when contending teams believe they can get Ekholm for two playoff runs, or is it after the July expansion draft, when teams who are interested in him no longer have to worry about their protection issues?

Another defenceman on the list –and rising up the ranks – is Arizona's Alex Goligoski. TSN Hockey Insider Darren Dreger reported Tuesday that the Coyotes are not looking at a rebuild, but GM Bill Armstrong wants to make some changes. Dreger added that most, if not all, of the changes probably will not get done between now and the trade deadline.

However, Goligoski, an unrestricted free agent at season's end, could be moveable before April 12.

Here is TSN Hockey’s latest Trade Bait board, which always seeks to blend a player’s prominence with his likelihood of a trade.