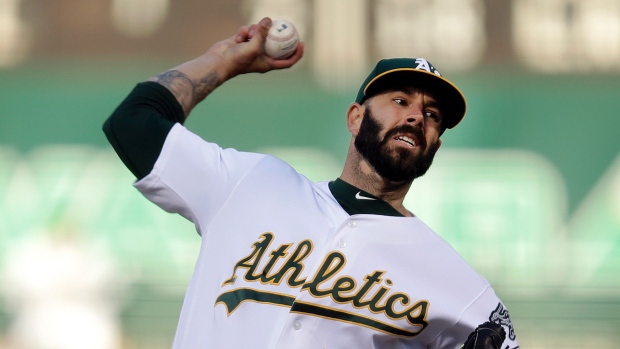 OAKLAND, Calif. — The Athletics hoped to get a steady presence from right-hander Mike Fiers when they brought him back on a two-year contract with more than $14 million in the off-season.

Fiers (7-3) allowed two unearned runs over 6 2/3 innings, getting into the seventh for the seventh time in eight starts — a stretch that started with his no-hitter May 7 against Cincinnati. He struck out four and walked two.

"They signed me here for a reason, to kind of be a leader and go out and win ballgames, so I had to put it on myself to really pitch better because that month was really inconsistent," Fiers said. "It's just about getting back to how I pitch, and I'm doing that now."

Oakland took a 3-2 lead in the second on catcher Chance Sisco's two-run throwing error. The A's loaded the bases with no outs when Josh Phegley was hit by a pitch, Marcus Semien walked and Matt Chapman reached on an infield hit. Shortstop Jonathan Villar then fielded Matt Olson's grounder and got the force at home on Phegley, but Sisco threw wide of first trying for a double play, allowing Semien and Chapman to score.

"Caught the ball, tagged home, looked up down the line and he was pretty close to first already but I rushed the throw," Sisco said. "I just have to make a better throw in that situation."

Chapman was initially called out at home after first baseman Chris Davis retrieved the ball and whipped it home, but the call was reversed on replay, showing Chapman slid under Sisco's tag.

"I knew it was going to be close at the plate and coming in that way I was just trying to sneak my foot in," Chapman said.

Semien extended his hitting streak to 14 games for Oakland. He doubled leading off the first and scored on Olson's double one out later.

Baltimore was coming off a 4-hour, 44-minute, 10-inning loss Sunday — the Orioles' longest game of the season — at home to Boston before the cross-country flight.

Liam Hendriks combined with Blake Treinen on 2 1/3 perfect innings in relief of Fiers.

Hendriks, who came into the game with two on and two outs in the seventh, struck out Chris Davis looking.

Treinen worked the ninth for his 16th save in 18 chances.

The Orioles took a 2-1 lead in the top of the second when third baseman Chapman's throwing error triggered a two-run inning.

Plate umpire John Libka stayed in the game after he was struck in the neck by pitch that bounced in front of home plate in the seventh.

"It's a life-changing moment," Davidson said, joined by his family and girlfriend for the festivities.

The Orioles selected the contract of LHP Sean Gilmartin from Triple-A Norfolk and designated for assignment OF Joey Rickard.

Orioles: OF Dwight Smith Jr., on the seven-day concussion list since June 7, is scheduled to begin a rehab assignment with Triple-A Norfolk in the next couple of days.

Athletics: RF Stephen Piscotty received positive word Monday that the melanoma removed from his right ear is gone. "They got all of it and it didn't spread. Great news," he said.

RHP Gabriel Ynoa (0-3, 5.02 ERA) tries again for his first victory of the season as the A's counter with LHP Brett Anderson (6-4, 3.89), who earned his first win against the Orioles in four career starts April 9 at Baltimore.