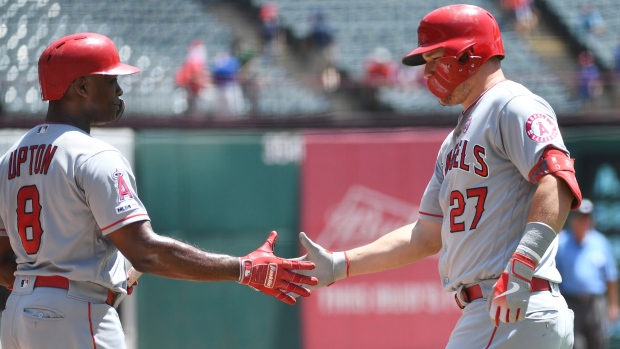 ARLINGTON, Texas — Delino DeShields raced home from second base with the winning run in the 11th inning, giving the Texas Rangers a 3-2 win and a doubleheader split with the Los Angeles Angels on Tuesday night after an error by first baseman Albert Pujols.

Nick Solak, who hit his first career homer earlier in the game after making his big league debut in the opener, hit a hard two-out shot that got past Pujols. The first baseman was on his knee and reaching to his left when the ball got by him.

DeShields reached on a one-out single off Ty Buttrey (6-6), the sixth Angels pitcher. DeShields stole second base after Rougned Odor struck out before Logan Forsythe walked to bring up the rookie.

Emmanuel Clase (1-2), the hard-throwing 21-year-old right-hander making his eighth appearance since his MLB debut earlier this month, worked two perfect innings for his first major league victory. He was the fifth Texas pitcher.

In the opener, Andrew Heaney had a career-high 14 strikeouts without a walk over eight innings and Mike Trout matched the MLB lead with his career-best 42nd homer in the Angels' 5-1 win. Luis Rengifo also went deep for Los Angeles.

Solak broke a scoreless tie in the nightcap with his one-out solo homer in the fifth off Jaime Barria.

Brock Burke, a 23-year-old lefty acquired from Tampa Bay in an off-season trade, pitched six scoreless innings in his big league debut for the Rangers and exited with a 2-0 lead in the nightcap.

Burke was denied his first win after the Angels tied the game. Shohei Ohtani had a two-out RBI double off Shawn Kelley in the eighth, and Brian Goodwin hit a game-tying solo homer in the ninth off closer Jose Leclerc, who had his fourth blown save in 12 chances.

After being recalled from Triple-A Nashville between games, Burke struck out four and walked two. He threw 67 of his 99 pitches for strikes and limited the Angels to four hits — two each by Ohtani and Pujols.

The Rangers brought up infielder Solak from Triple-A Nashville when outfielder Nomar Mazara was placed on the 10-day injured list with a left oblique strain he sustained in the series opener Monday night.

The doubleheader opener was the makeup of the July 1 game that was postponed after pitcher Tyler Skaggs was found dead in his hotel room the last time the Angels played in Texas. The coroner hasn't released a cause of death for Skaggs, who was 27.

In the opener, when the temperature reached 100 degrees during the game, Trout hit a two-run homer as part of a three-run first inning before Heaney (3-3), one of Skaggs' best friends, had even thrown his first pitch.

Heaney had 10 of his strikeouts during a stretch of 16 consecutive retired batters after he allowed consecutive one-out singles in the first — until Willie Calhoun's homer with two outs in the sixth. Heaney threw 79 of his 108 pitches for strikes.

Joe Palumbo (0-2), added from Triple-A Nashville as the 26th player for the doubleheader, started the opener and lasted only 1 2/3 innings before leaving because of a blister on his left thumb. After six no-hit innings in his last minor league start, the lefty allowed three consecutive hits to start the game, including Trout's homer, and walked the next two batters after that.

Angels: Barria was originally scheduled to start the opener Tuesday, but the Angels switched him to the night game to give him some extra rest after he left the ballpark Monday night with a fever.

Rangers: Elvis Andrus got his hand stepped on when he was caught stealing in the eighth inning of the nightcap. He remained in the game, and was back at shortstop in the ninth inning.

All-Star lefty Mike Minor (11-7) starts the finale for the Rangers, who are going for only their second series win in a span of 15 series since late June. Lefty Patrick Sandoval (0-1) goes for the Angels.