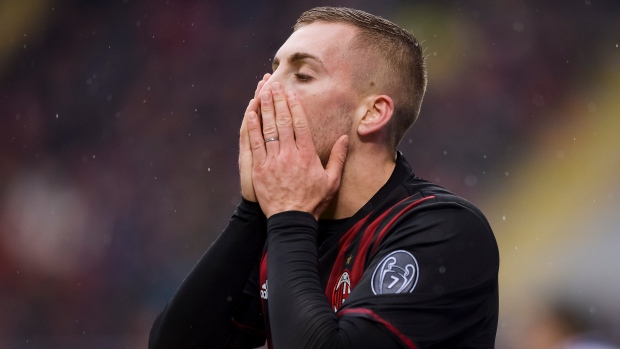 MILAN — No team appears capable of stopping Juventus after the Bianconeri beat Inter Milan 1-0 Sunday in an entertaining Derby d'Italia in Serie A.

Juan Cuadrado scored on the stroke of halftime for Juventus, which also hit the bar twice in the first period as Massimiliano Allegri's side extended its Serie A record to 28 consecutive home wins.

Juventus — which has played a match less than most of its rivals — moved six points clear of second-placed Napoli and seven above Roma, which plays Fiorentina on Tuesday.

"I'm very happy with what the lads did, it was the performance I asked them for," Allegri said. "It was a very top-level match, like a Champions League semifinal or quarterfinal."

Inter slipped to fifth, a point behind Lazio and 12 behind Juve.

"We should have had two penalties in the first half, for challenges on (Mauro) Icardi," Inter coach Stefano Pioli said.

"We have regrets because of our mistake which led to their goal, the first half was almost over. Then it's difficult to come back against Juventus."

"It's not a question of the formation," Allegri said. "Football isn't about numbers but about footballers who have certain characteristics. Then it doesn't matter whether you play with one system or another. Before this formation we won 15 matches."

Paulo Dybala could have had two stunning goals in the opening 12 minutes.

First his overhead kick was brilliantly saved by Samir Handanovic and minutes later the Argentine lobbed the Inter goalkeeper but his effort came off the crossbar.

Inter also had its chances as Roberto Gagliardini volleyed narrowly over and Joao Mario's low shot went inches wide of the left post, much to the relief of Gianluigi Buffon.

Handanovic kept Inter in the match in the second half with saves from Pjanic, Gonzalo Higuain and Mandzukic.

Inter forward Ivan Perisic was sent off for dissent in stoppage time.

Chelsea coach Antonio Conte, who led Juventus to three of its five successive league titles before Allegri took over, was watching from the stands.

Injury-hit AC Milan was plunged further into crisis by its fourth successive defeat in all competitions.

Milan was third in December but one point from its past four league matches has seen it slip to eighth, 10 points behind the Champions League places.

"It's certainly a crisis of results, but we have to try to remain calm," Milan coach Vincenzo Montella said.

"We're still in the fight for Europa League places. If we continue playing well, we'll 100 per cent get there."

Sampdoria moved up to 10th after its first win over Milan since 2012.

"A draw would have been fairer," Sampdoria coach Marco Giampaolo said. "Milan pressed us in our half and we're not used to that."

After a balanced first half, Milan should have taken the lead immediately after the break. Emiliano Viviano could only parry Suso's cross-shot but Gerard Deulofeu, who was making his first start, struck the rebound onto the post from a good position.

Milan had further chances before Sampdoria broke the deadlock in the 69th after Gabriel Paletta tripped Fabio Quagliarella in the area and Luis Muriel fired the spot kick into the bottom right corner.

Milan should have levelled three minutes from time but Gianluca Lapadula fired straight at Viviano from close range and two follow-up efforts were blocked before the ball was finally cleared.

Milan's misery was compounded in the final minute when Jose Sosa was sent off following two yellow cards in five minutes.

Marco Parolo scored four times as Lazio got back on track following two successive league defeats, although it had to withstand a Pescara comeback.

Parolo's two headers had given Lazio a seemingly comfortable lead inside 14 minutes.

But the home side levelled the match shortly before halftime as Ahmad Benali tapped in a rebound and Gaston Brugman volleyed in the equalizer, after Pescara had also seen Gianluca Caprari's penalty saved.

Parolo completed his hat trick with another header four minutes after the break and Keita Balde Diao and Ciro Immobile extended Lazio's advantage.

The Italy forward did not celebrate as he spent a season on loan at Pescara, helping it to the Serie B title in 2012.

Parolo, who only scored three goals all last season, netted his fourth of the game in the 77th minute with a low volley from Senad Lulic's cross.

It was the second match of the weekend with eight goals after Napoli won 7-1 at Bologna on Saturday.

Andrea Belotti moved to second in the goalscoring charts with his 15th league goal of the season but his Torino side could only draw 1-1 at Empoli.