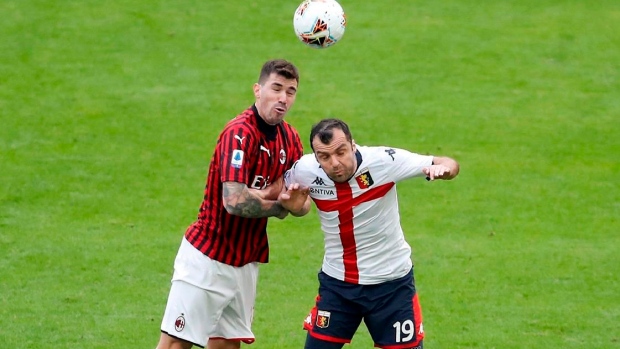 Milan loses to Genoa amid further chaos for Serie A Article Image 0 , The Canadian Press

MILAN — Cristiano Ronaldo attempted to add levity to a troubling situation in virus-struck Italy before helping Juventus to a 2-0 win over Inter Milan in Serie A on Sunday.

The Derby d'Italia, one of the season's biggest matches, had to be played without fans and with only a limited number of people because of the virus outbreak in Italy.

When Ronaldo got off the team bus inside the stadium, he pretended to high-five imaginary mascots — something he normally does with the actual mascots — before smiling at the cameras.

Aaron Ramsey scored and set up the other goal for Paulo Dybala as the match finally went ahead, a week late due to the spread of the new coronavirus in Italy.

Juventus moved back to the top of the table, a point above Lazio. Inter is third, nine points behind the Bianconeri following a miserable return to Juventus for coach Antonio Conte.

“An important victory, even if there are still many matches to play, in theory," Juventus coach Maurizio Sarri said.

Sarri's use of the phrase “in theory” could prove significant after calls for the Serie A season to be suspended.

“The know-it-alls scare me, I can’t say what’s right to do,” Sarri added. “But I ask myself if it’s right to take away a two-hour diversion in front of the television for those who have to stay at home.

“We don’t feel scared, but I can’t say how high the risk is.”

The match was played in an empty stadium - including no mascots - following last week's decree from the Italian government that all sporting events in Italy must take place without spectators until April 3.

That led to Thursday's decision that the Italian soccer league would resume in full this weekend, starting with the matches that were postponed last round because of the outbreak.

No fans meant there was no fiery welcome for Conte, who was returning to Juventus for the first time as opposition coach. Conte, who left in 2014, led Juventus to the first three of its eight straight league titles and also spent most of his playing career with the Bianconeri.

The voices of players and coaches could clearly be heard and, despite the lack of fans, there was plenty of intensity and passion shown on the field.

Inter goalkeeper Samir Handanovic made a number of crucial saves before Juventus broke the deadlock 10 minutes into the second half.

Ronaldo failed to control Blaise Matuidi’s pullback and it turned into an assist for Ramsey, who fired Juventus in front.

Ramsey also had a part in Juve’s second goal, playing a one-two with Dybala following a delightful team move. Dybala then feinted past Inter defender Ashley Young before shooting into the bottom left corner.

Italian soccer was thrown into further confusion on Sunday after calls from Italy’s sports minister and the players’ association president to suspend the matches in the top division.

Ibrahimovic, who had two other good chances, scored from close range 13 minutes from time to set up a tense finale after first-half goals from Goran Pandev and Francesco Cassata for Genoa.

A select number of journalists were among the few allowed into the stadium and they were each given a small bottle of hand sanitizer by Milan.

Milan remained seventh, while Genoa climbed out of the relegation zone, although it remained level on points with 18th-place Lecce.

Parma-Spal, the first match of the day, kicked off after a 75-minute delay as officials considered an appeal from sports minister Vincenzo Spadafora minutes before the scheduled start. Spal won 1-0.

Sampdoria moved one point above the drop zone after it came from behind to beat Hellas Verona 2-1.