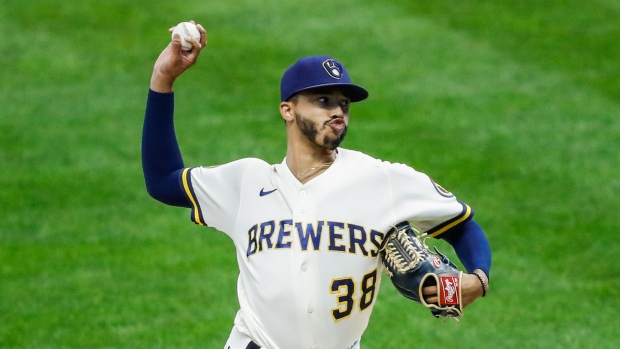 Milwaukee Brewers reliever Devin Williams says the shoulder soreness that kept the 2020 NL Rookie of the Year from pitching in the playoffs shouldn’t impact his readiness for the start of the season.

Williams also doesn’t expect it to hamper his comfort level in throwing the changeup that became one of baseball’s most unhittable pitches last season.

“I’ve been throwing my changeup for a month and a half, two months now,” Williams said Friday from the Brewers’ spring-training site in Phoenix. “So it’s in a good spot. I’m not worried about it.”

The Brewers are being cautious with Williams as he works his way back. The 26-year-old right-hander says he doesn’t expect to make his Cactus League debut until after the Brewers’ second scheduled off day, which is March 17.

Williams noted that he has done three bullpen sessions already and added that “everything’s been going according to plan.”

“Everything has gone well,” manager Craig Counsell said. “We’re very happy with how it’s going, really. We’re on a nice schedule, we’re sticking to it and he’s responded very well to it and he’s feeling good. So I feel like we’re in a nice place.”

The shoulder issue caused the Brewers to leave Williams off the roster for their first-round playoff series loss to the eventual World Series champion Los Angeles Dodgers.

“As far as I know, it was just a strain,” Williams said. “I don’t really know what caused it. It wasn’t a specific pitch or anything. It was just something that kind of developed later, after I had thrown one day.”

Williams dominated NL hitters last year thanks in part to a devastating changeup that earned its own nickname – the Airbender. Williams allowed just one earned run, three unearned runs and eight hits in 27 innings for an 0.33 ERA. He struck out 53 of the 100 batters he faced.

Those extraordinary numbers helped Williams become the first pitcher to earn Rookie of the Year honours without recording a save or making a start.

“I didn’t think that I was going to win, to be honest,” Williams said. “It was kind of a shock to me, but I do believe that I earned it. Yeah, I was definitely surprised because they definitely tend to lean more toward the hitters, the everyday players.”

Milwaukee’s ability to close games out last year with Williams and two-time All-Star left-hander Josh Hader helped the Brewers earn a third straight playoff berth without getting much production from their lineup.

The return of Hader and Williams offers the Brewers reason for optimism. Their contrasting styles should give opposing hitters all kinds of problems in the late innings.

“He’s obviously left-handed,” Williams said. “I’m right-handed. He’s throwing from almost a sidearm angle whereas I’m a little more conventional. But as far as pitching goes, we’re not similar at all and I think that’s a good thing because the hitters have to adjust.”

Williams’ challenge will be trying to live up to what he accomplished as a rookie, particularly as hitters learn from what he did against them a year ago.

“I think the league hasn’t adapted yet,” pitching coach Chris Hook said. “I think we’re going to have to be aware of how the league adapts and be cognizant that that might happen, and then be ready for those changes when we need to make them.”

Williams wants to build off what he did last year and help the Brewers earn another post-season berth so he can get a taste of that playoff experience that eluded him last year.

“Having to sit there for those few days and knowing I wouldn’t be able to contribute in any way, that was pretty tough,” Williams said. “I felt like I did a lot to help us get to that point last year, and to not be able to help in the post-season when it really counts, that just kind of gave me some more motivation for this year.”