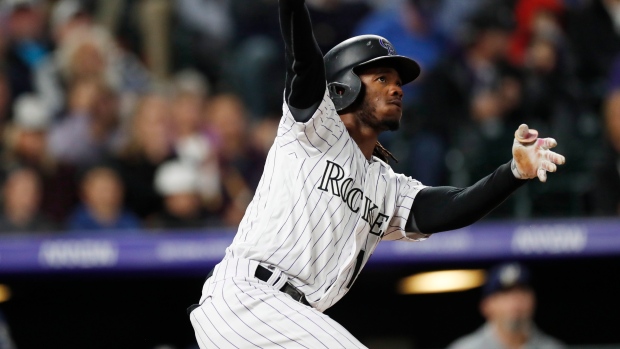 DENVER — The September surge for the Milwaukee Brewers took a hit Friday night, and the rare loss could be more costly than one game.

Cleanup man Ryan Braun exited early with a left calf strain and the Brewers' push for the NL Central title slowed when their seven-game winning streak ended with an 11-7 loss to the Colorado Rockies.

The playoff-bound Brewers remained a game behind St. Louis, which lost to the Cubs 8-2, for the division lead. Milwaukee dropped two games in back of Washington for the top NL wild-card spot with two games left.

More concerning was the status of Braun.

Braun hit an RBI single in the first inning and played left field in the bottom half. He was pulled in the second.

"I felt it running to first base in my first at-bat and it didn't loosen up at all when I was on defence in the bottom of the first. I'll have to get an MRI to see the severity and see where we're at," Braun said. "It's encouraging, it feels better now than it did then. If it felt worse now that would have been a bad sign and more concerning."

The Brewers are already without 2018 NL MVP Christian Yelich, who is done for the season with a fractured kneecap, and infielder Mike Moustakas is nursing a sore left elbow. Despite the injuries, Milwaukee had won 18 of 20 coming into the final series of the season.

Now Braun's availability is in doubt for the next two games, and possibly longer.

"The timing of it isn't ideal. We have a lot of things going on," Braun said. "We're already dealing with Moose being out the last couple of days, we want to be as close to full strength and full health as we approach the end of the season."

Lorenzo Cain homered, Keston Hiura had four hits and Brewers starter Zach Davies had a single before being lifted for a pinch-hitter in the sixth. He allowed just one run on two hits before departing with a 2-1 lead.

"I'm glad I finished strong in the month of September," Davies said. "Tough loss today but, one, we're still in the post-season and, two, there's still two more games to be played."

Pinch-hitter Raimel Tapia connected for a grand slam to cap Colorado's seven-run sixth inning that made it 8-2.

The Brewers allowed a total of 13 runs during their winning streak, but a bullpen that was 12-0 over the last 20 games imploded against Colorado.

The Rockies sent 12 batters to the plate in the sixth and needed just four hits to score seven times. Ray Black (0-1) gave up a leadoff homer to Charlie Blackmon, his 32nd, and left without recording an out after three batters.

Daniel Murphy put Colorado ahead with an RBI single, Tony Wolters drove in another with a bases-loaded walk and Tapia followed with the second pinch-hit grand slam of his career, tagging Jay Jackson.

The Brewers issued seven walks in the game, five in the sixth inning.

Ryan McMahon hit a two-run homer in Colorado's three-run seventh inning. Milwaukee scored two in the eighth and three in the ninth.

"He didn't have his best fastball but he competes as hard as anyone," manager Bud Black said. "He's a tough kid and he can roll his way through a game."

Brewers: Counsell said Moustakas has been bothered with soreness in his left elbow recently and he wants to give him a couple of days off this weekend to get ready for the post-season. Counsell said batting doesn't bother the elbow, and he pinch-hit in the ninth on Friday night.

"The hope here is two days here," Counsell said. "The goal is trying to put this behind him so we're not worried about this in October."

Rockies: RHP Carlos Estevez is dealing with a sore back and the flu and will likely not pitch again this season, Black said.